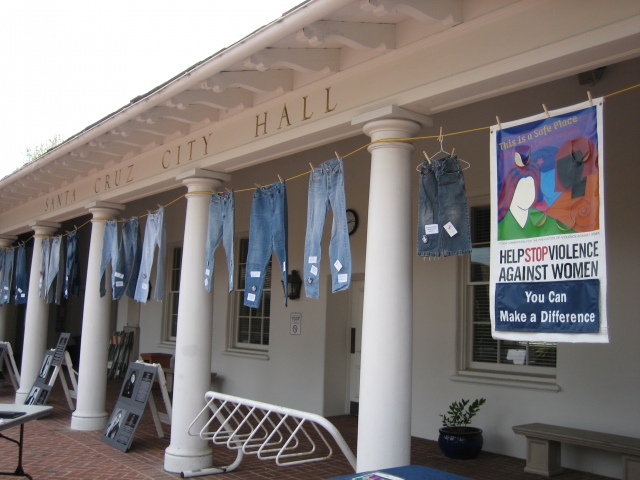 original image (2592x1944)
The Jean art exhibit out front of Santa Cruz City Hall today was worth capturing on film. We've seen the Mayor of Santa Cruz raise a hemp flag in honor of a hemp-fueled vehicle rolling into town after driving coast to coast. This Denim Day exhibit on the City Hall front lawn must be a first too.

Denim Day is about challenging myth-based injustice. The Italian High Court decision (1999) to rule against the woman because she was wearing jeans (and therefore would have to have helped) was a hugely unpopular verdict that sparked a worldwide outcry and has now become an international symbol of myth-based injustice for sexual assault victims.

Branciforte Middle School was among the participants producing jean art with strong and proud statements. The DA came to speak in the formal opening of the City Hall exhbit as did the local police. Walnut Women's Center did a presentation and were one of the groups tabling. They had purple bracelets which read "Peace Begins at Home"

One day when you're walking by City Hall, cross that lawn and check out the small sculpture. It was dedicated in 1984 and it is called "Changing of the Guard". SC City Council has made national news on more than one occasion for their radical stance (in institutional terms), for championing issues and initiatives considered controversial in the mainstream. Between Matriot Day and Denim Day, it would be more fitting to talk about the Herstory of Santa Cruz.
http://www.myspace.com/denimday07
§Jeans Make A Stong Statement at City Hall
by Corrina McFarlane Wednesday Apr 25th, 2007 7:13 PM 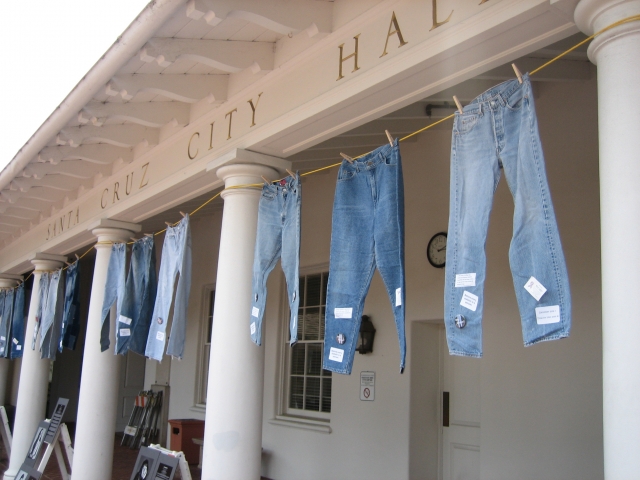 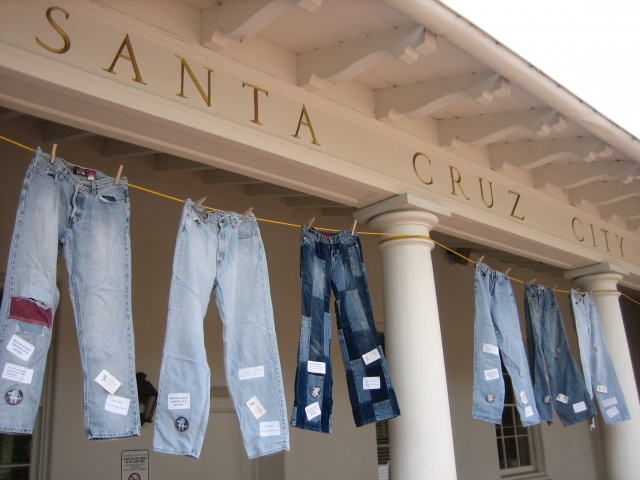 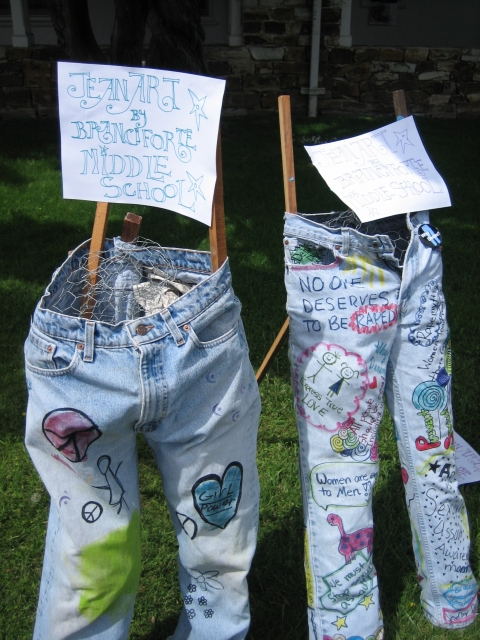 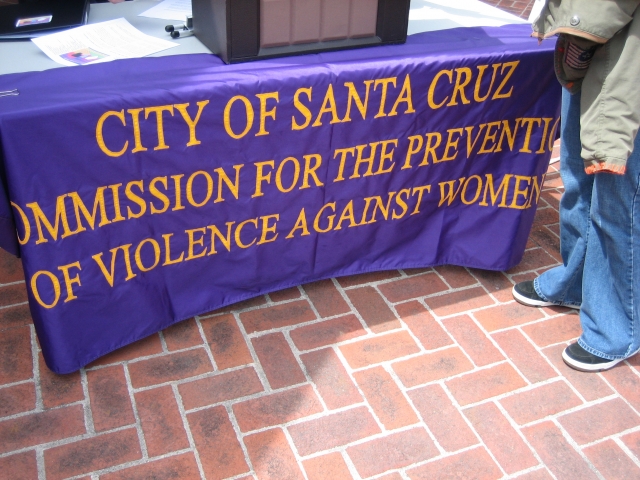 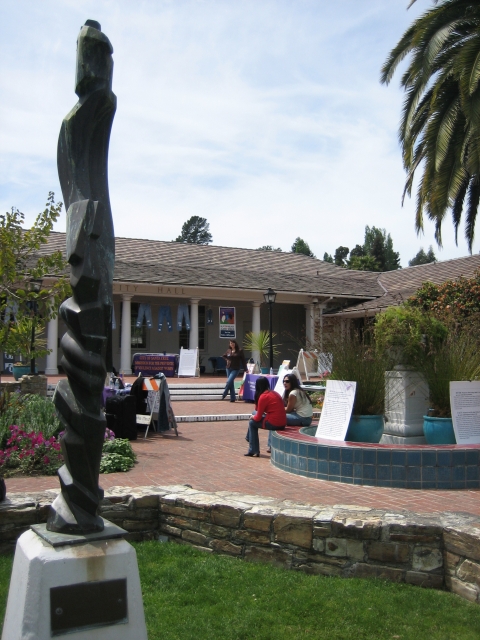 §Power to Women!
by teari h.
Sunday Apr 29th, 2007 3:47 PM
Thanks for the excellent pictures and commentary!! Way to go to all the people and groups who made this happen. The City Council courtyard was a perfect backdrop for this display.

WE have the power!! Stand up, Speak up and DEMAND it.
Add a Comment
§All men are responsible for stopping all forms of male violence against women
by Elaine Charkowski
Sunday Apr 29th, 2007 6:59 PM
Instead of Sexual Assault Awareness Month it should be Stop Male Violence Against Women Millennium. The posters Stop Violence Against Women hanging around town should read Stop MALE violence against women.
The terms "domestic violence" "family violence" or just "violence" dont name men as the pertetrators of most of the violence committed against women during the last 5,000 years.
Also perpetrators must be specifically named to honor ALL the victims of violence, (*white* racism, *hetrosexual* oppression, and thus MALE violence against women.
Breaking the silence by naming an atrocity is the first step in ending it. Male violence against women must be named specifically. To maintain patriarchy,
"Women's agony at the hands of men must never be revealed. If women steadfastly and courageously began to tell the truth and would not stop, would not be co-opted, would not become afraid, the truth of our enslavement would be undeniable and the jig would be up" —from "Telling the Truth" by Sonia Johnson.
Women, who outnumber men, are the single largest group of oppressed humans on the planet. Men have oppressed women nonstop for the longest length of time of any oppressed group.
The male oppression of women is the model for ALL oppressin in which the oppressed are treated the way patriarchal men treat women-degraded, and used as resources.
Add a Comment
§To honor all the victims of violence you must acknowledge a few things
by WMST grad
Wednesday May 2nd, 2007 12:44 PM
The posters don't read "Stop MALE violence against women" because they would then ignore that fact that women can be agents of violence. Domestic violence and rape do not just refer to men harming women. The terms are also used to describe men harming men, women harming men, or women harming women. These people are often ignored by agents/systems of law and marginalized by rhetoric (to be violent is to be male and to be victimized is to be female).
Add a Comment
§Stop male violence against women
by Utopia Bold
Wednesday May 2nd, 2007 9:39 PM
Male violence against women is the oldest oppression and has been going on for more then 5,000 years in every nation on earth. It is the most widespread form of violence against the most numerous group of people on the planet-women.

In every society on earth, women are regarded with contempt. There is NO nation in which women have the rights of men.

Male violence against women is the model for ALL oppression. Racists abuse and degrade people of different races to put them in a womanish position of degradaton and exploitation.

Since male violence against women is the most widespread oppression and has been perpetrated for the longest time of any oppression, it must be named specifically to be eradicated.

Other people who are oppressed also need to name their oppressors specificically (white racism, hetrosexual oppression of LGBT etc. to bring it into focus so it can be eradicated.
Add a Comment
Support Independent Media
We are 100% volunteer and depend on your participation to sustain our efforts!