Add an Event
Newswire
Calendar
Features
Home
Donate
From the Open-Publishing Calendar
From the Open-Publishing Newswire
Indybay Feature
Publish to Newswire
Add an Event
Related Categories: U.S. | Labor & Workers
Rage Against the Fast Food Nation
by irlandeso
Saturday Apr 21st, 2007 2:51 PM
"By my count CIW 2, Taco Bell and McDonald's 0. Burger King look the fuck out." - Tom Morello of Rage Against the Machine and The Nightwatchman

to view a video of the Rage performance at the Concert for Fair Food in Chicago go to -
http://www.indybay.org/uploads/2007/04/20/y-ahora_que_spanish.mov 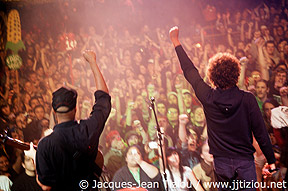 For the first time in over 7 years, Zack de la Rocha and Tom Morello of Rage Against the Machine took the stage together to celebrate the Coalition of Immokalee Workers’(CIW) recent victory over McDonalds. The two took the stage on Saturday April 14th, in a prelude of what is to come in the reunion of Rage Against the Machines shows set for Coachella on April 29th and the Rock the Bells tour later in the summer. In typical Rage fashion, performing to a packed audience at the “Concert for Fair Food” in Chicago, they got the whole crowd singing along and pumping their fists while drawing attention to the struggle of the Immokalee farm workers in their struggle to end slavery and poor conditions in the tomato fields of Florida.

Most of the concert can be viewed on Youtube videos posted online by those attending the concert, with Zack and Tom (on acoustic guitar) playing 3 Rage classics and one new song that Zack wrote on the flight to Chicago after hearing of the CIW’s recent agreement with McDonalds. The new song had the crowd singing along to the chorus, chanting “C – I – W, why! They walk the talk and the word becomes the weapon. C – I – W, why! Justice in the fields and the clowns get stepping.” That song can be best viewed in a video that the CIW has posted on their website online, called “Y ahora que? (and now what?).”

In addition to the upcoming reunion concerts that Rage Against the Machine is set to play, Tom Morello will be releasing his debut solo album called “One Man Revolution” on April 24th under the name The Nightwatchman . Morello plays acoustic guitar on the album and seeks to create new folk songs much like the union and protest songs that were sung by many people in the past, as the Wobblies once did with their Little Red Book of Songs, to “Fan the Flames of Discontent.”

For more info on the CIW Campaign for Fair Food go to - http://www.ciw-online.org

To check out Tom's new music got to The Nightwatchman's website or myspace -
http://www.nightwatchmanmusic.com/
http://www.myspace.com/thenightwatchman
http://www.fresnoundercurrent.net
Add Your Comments
LATEST COMMENTS ABOUT THIS ARTICLE
Listed below are the latest comments about this post.
These comments are submitted anonymously by website visitors.