by Mike Rhodes (MikeRhodes [at] Comcast.net)
Rev Larry Arce, chief executive officer of the Rescue Mission, sends his “disciples” out to destroy homeless peoples property. Homeless people have lost their tents, clothes, medicine, and nearly everything they own in these periodic raids conducted by the Rescue Mission. Arce tells the homeless people who complain about his actions that he has the blessing of the city to “clean up” the streets of downtown Fresno. A California Public Records Act request shows that Arce is bluffing - no such agreement exists. 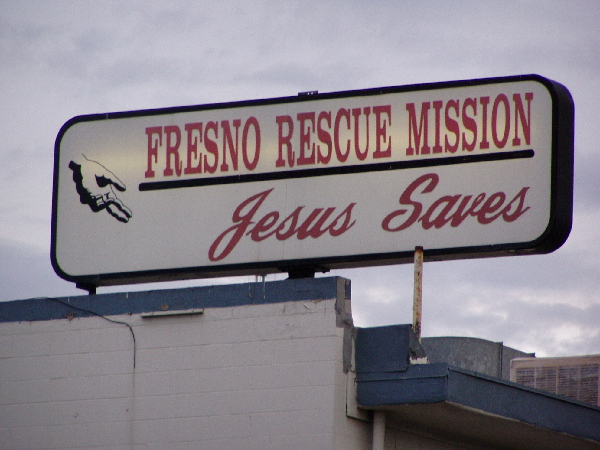 Homeless people living near the Rescue Mission in downtown Fresno say the chief executive officer of that organization, Larry Arce, is directing his staff to destroy their property. Lori, a homeless woman told me “we were at the doctors office over at the Poverello House when someone came in and said the “disciples” from the Rescue Mission were throwing our stuff away.” She said her husband immediately went to the Mission to ask Arce for his property back. Included in the property taken was Lori’s husband’s heart medicine. “Arce told my husband ‘oh well, the city told me to do that’ and that there was nothing we could do about it,” Lori said.

In another incident that happened last summer, Rescue Mission disciples directed by Rev. Arce, targeted an area known as The Hill, which is a homeless encampment just south of the Rescue Mission. It is public property. Using a fork lift and dumpster, Rescue Mission crews moved through the area throwing away everything in their path. Bryan Apper, who works with the Saint Benedict Catholic Worker, said he tried later that day, to recover one homeless woman’s property. Apper said “we were concerned for Peggy because they had taken her new red tent that a church group had just given her. Peggy is schizophrenic, she is barred from staying at Naomi House (a nearby homeless shelter for women) and would literally have no place to sleep that night.”

The Rescue Mission “clean up” crews struck again earlier this year. Big Sue, who lives on The Hill, said the homeless people in that encampment had set up Christmas ornaments over the holidays. The Fresno Bee even ran a nice feel good story with a photo about how the homeless had set up the display. Big Sue said that Rescue Mission disciples came out a couple of days after Christmas and stole the display. Big Sue said “after that I put up a sign of a big heart on the fence and the words ‘love each other’ and ‘forgive’ but they came out and stole those too.” She said the big heart symbolized how her heart had been broken when they stole the ornaments.

Rev. Arce repeatedly tells anyone who questions his actions that he has an agreement with the police and the City of Fresno to keep G street clean. Curious about this agreement, I submitted a California Public Records Act request to the City of Fresno and the police department asking for a copy of the document authorizing the Rescue Mission to take and destroy homeless peoples property. City officials tell me, after a thorough search of their records, that no such document exist. The City of Fresno Public Information Office asked Arce if such a document existed. Patti Miller, Public Affairs Administrator, wrote in an email - “Rev. Arce assured me as well that to his knowledge, no such document exists.”

The City of Fresno is under a court order to stop taking and immediately destroying homeless peoples property. During the hearing in federal court, Rev Arce gave testimony on the City of Fresno’s behalf. He supported the city policy of bulldozing homeless encampments and said that he directs Rescue Mission staff to destroy homeless peoples property if it is left on the sidewalk, on G street, or nearby the Mission. In sworn testimony in federal court, when asked if he has thrown away shopping carts with homeless peoples property in them, he answered “yes sir.” When asked if he has gone up and down G street doing that, Arce answered “yes, sir.”

For a list of articles and documents about the struggle for civil liberties for homeless people in Fresno, see: http://www.fresnoalliance.com/home/homelessness.htm
END_OF_DOCUMENT_TOKEN_TO_BE_REPLACED
§Above the law?
by Mike Rhodes 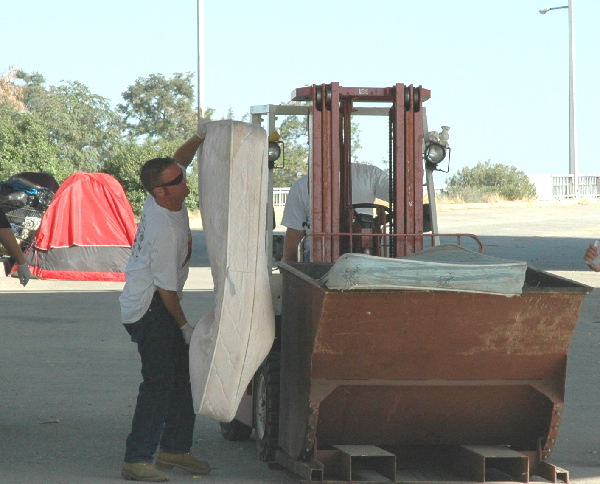 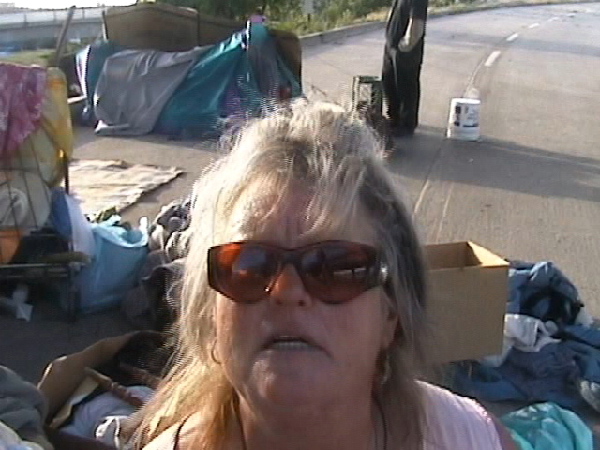 Big Sue lives in the homeless encampment known as The Hill. She has had her property taken by Rescue Mission staff.
§Harassing the Homeless
by Mike Rhodes 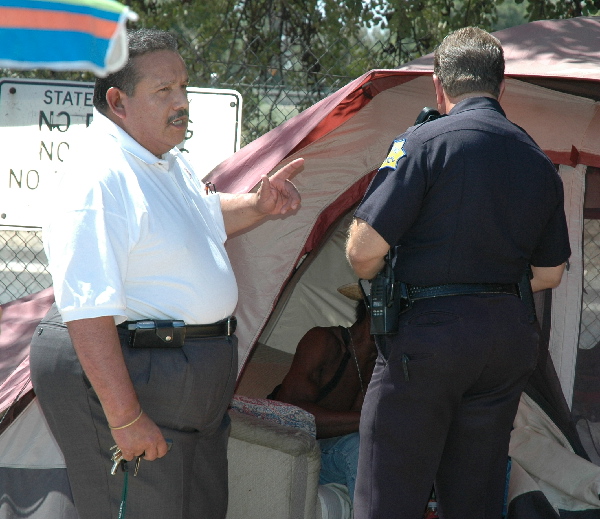 Rev. Larry Arce and Captain Garner telling a homeless man that he has to “move on.”
Add Your Comments
Comments (Hide Comments)
§Hope someone sues Rev Larry Arce
by anng
Hope someone sues Reb Larry Arce.. and takes away his title as Rev.
Maybe they can take over the Rescue Mission with the money and actually start helping the homeless without forcing them to listen to their interpretation of the Bible and Christianity.
I also hope that if he isn't arrested for stealing the homeless's property, then the courts will go after the police.
Add a Comment
§Is this man really purporting himself to be a "man of God?"
by debk
I happened upon this article through a series of social action searches stemming from Kairos. I know I don't live anywhere close (in Canada actually), but I can't read about such a horrible display of inhumanity without commenting. Is this man an actual minister??? How could he possibly call himself that and then take away the (probably) very few possessions from people who are already having to deal with so much. My feelings about organized religion are already mixed at best, but if this person is an example of who religious people are then I am really glad I don't go to church. Why isn't he helping them??? Why isn't he finding places for people to live who want off the streets? Why isn't he bringing them hot food, water, medicine? I am pretty sure that is what Jesus would do. This "Reverend" reminds me of the minister in the Stephen King novel "The Talisman" - evil under the pretext of religion.
Add a Comment
§"Reverend" Arce will likely be dwelling with the late "Reverend" Falwell...
by noel
...in the darkest depths of hell very soon. No need to sue; his heart will soon attack him.

Religion has been used to subvert the spirituality that dwells in our hearts for many thousands of years. All of the Pharaohs of Egypt were the sons or daughters of divinity of one sort or another and nothing has changed since but the details dictated by time and place.
END_OF_DOCUMENT_TOKEN_TO_BE_REPLACED
Add a Comment
§I Hardly Can Believe It!
by Robin Hummingbird Songs
I can hardly believe that this person who calls himself a "man of God" would be involved in persecuting the homeless in such an obscene way! To this man and those who work with him, I ask, "What would Jesus do?" Would HE throw away the only posessions the homeless have?
Isn't a rescue mission supposed to HELP the homeless, not stand with those who make the unfair policies against them? What is up with this!
To insist that the homeless live in a concentration-camp-type situation is equally unacceptable!
What has happened to human compassion, and why, in this instance, does it seem to be dead?
To all those who persecute the homeless: What if it were you? Since it could one day be you out there on the streets, how would YOU like to be treated?
JESUS WOULD NOT throw away homeless people's posessions or force them to live in concentration camps! NEITHER SHOULD WE!
Add a Comment
Support Independent Media
We are 100% volunteer and depend on your participation to sustain our efforts!