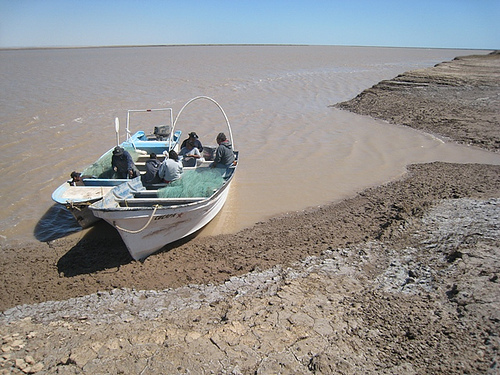 Since February 26, the Cucapa Tribe in El Mayor, Baja California has organized an historic Zapatista peace camp to defend their fishing rights against harassment and intimidation by the Mexican government on the Colorado River Delta.

The idea for the camp originated during a visit by Subcomandante Marcos, spokesman for the EZLN (Zapatista Army of National Liberation), to El Mayor during the Zapatista “Otra Campana” (Other Campaign) in October 2006.

“We have decided to send an urgent message to the Mexicans and Chicanos north of the Rio Grande to come in order to maximize the number of people here, create a safe space, and protect the Cucapa and Kiliwa community during the fishing season,” said Marcos, also known as “delegado zero,” in announcing the initiation of the camp after a meeting with the Cucapa and Kiliwa community leaders.

In February, the Cucapa community issued its call to action. “You are no longer being asked to stand in solidarity with the indigenous people of Mexico. Now you are being asked to stand to play an integral role in a bi-national effort that will no longer consist of only resisting but also helping these communities exist and live as they have for thousands of years,” said the tribe.

The 304 member Cucapa Tribe said the camp aimed to “help reestablish the networks and relations that existed before borders separated families and communities, and to help expose these atrocities to a world that has avoided looking at the price of its excess, comfort and luxury.”

Although the peace camp got off to a slow start, the momentum built in March as the Cucapa and supporters constructed a fishing camp, secured buyers for the fish (corvina), purchased a refrigerated trailer and netted fish in defiance of federal fishing regulations that require permits in a “marine protected area.”

By the end of April, the camp had achieved its goals. “The camp is almost over, but it has been extremely successful,” explained Cesar Soriano from the Banda Martes in Los Angeles. “The main goal of the Cucapa – to fish without government harassment - was achieved.”

“The camp also achieved its second goal, to organize direct support from people from both sides of the border,” said Soriano. At different points during the camp, activists from Mexico City, Australia, El Salvador, and American Indian nations, as well as from San Diego and Los Angeles, showed their solidarity with the Cucapa. Many Zapatista solidarity groups from throughout California and the Southwest organized fundraisers for the Cucapa struggle.

Subcomandante Marcos and 10 Comandantes from Chiapas, en route to the Cucapa Camp in April, were also welcomed by the O’odham Tribe and friends in the state of Sonora.

“The Cucapa are doing the same thing they have been doing for 9,000 years,” said Marcos, as quoted by Brenda Norrell in Narco News on April 11. “The Cucapa and other Indian people called for this camp in defense of nature so they can fish without detentions or being put in jail.”

Caravans from Los Angeles, San Diego, Oakland and other California cities have gone to the camp to support the Cucapa when they fish during the high tides. While some accompanied the fishermen and fisherwomen on their boats, the others stayed on shore to watch out for federal soliders coming to cite or harass the Cucapa. The last high tide that the Cucapa will fish during will be from May 10-May 16, 2007.

For over thousands of years, the Cucapa people lived on land surrounding the Colorado River and its Delta where it empties into the Sea of Cortez. The tribe, in what is now the southwestern United States and north end of Baja California, lived off harvesting the native fish and plants of the river and Delta.

However, fish catches by the Cucapa and other tribes plummeted in recent decades as agribusiness in California and Arizona and thirsty Southern California cities diverted the entire flow of the Colorado without regard for the indigenous people below the U.S.-Mexico border. With only a trickle of the river ever reaching the once fertile Delta, catches of corvina, totuava (a giant seabass like fish that is now protected) and other species of fish declined dramatically.

Rather than addressing the problems of massive water diversions and fishing by corporate commercial fishing fleets that caused the fishery and ecosystem to decline, the Mexican government, with support by corporate-funded U.S. conservation groups like Conservation International and the World Wildlife Fund, declared the traditional area of the Cucapa and Kiliwa people “an ecological reserve.”

They transformed the waters that for thousands of years sustained indigenous people into the “Biosphere Reserve of the Upper Gulf of California” on June, 10, 1993, because it was “in the public interest,” according to the government’s National Commission of Protected Natural Areas website.

“The website also noted that 77 percent of the people who live and around the reserve rely on fishing for their livelihoods, so it is unclear which public interest the fishing ban in the protected area serves,” said Kristin Bricker, in the Narco News Bulletin, October 22, 2007.

According to Bricker, “The problem isn’t that the Cucapa and Killiwa don’t want to preserve endangered fish and dolphins. They point out that it is in their very best interest to protect the species they rely upon for their livelihood and they want very much to be custodians of the river and its fish as they have for generations.”
Hilda Hurtado Valenzuela, the secretary of the Cucapa fishing cooperative, stressed that the Cucapa was not responsible for the overfishing, even though they bear the brunt of its consequences.

Armed federal soldiers (federales) have patrolled the reserve and accosted the fishermen since the marine protected area was established. In October, the community had approximately thirty outstanding warrants for “illegal” fishing in their attempt to survive, practicing the same traditions as their ancestors.

Hopefully, the success of this camp will send a strong message to the Mexican government and U.S. “conservation” groups that so called “bio-reserves” and “marine protected areas” cannot be imposed upon indigenous people and other family fishermen without resistance.

The problems that the Cucapa Tribe faces in Mexico parallel the situation in California where well-funded “conservation” groups, in collusion with Governor Arnold Schwarzenegger, are attempting to kick recreational anglers and family commercial fishermen off the water through the institution of “marine protected areas,” even though massive de-facto reserves and some of the strictest fishing regulations in the world are already in place.

Just like the Cucapa and other tribes have been completely excluded by "conservation" groups and Mexican government from any input into the institution of the bioreserves, the California Indian tribes have to date been completely excluded from a privately funded “stakeholders” process to push through the MLPA (Marine Life Protection Act) initiative.

And just like the ecosystem of the Colorado River Delta has been destroyed by water diversions and pollution, the California Delta, a nursery sustaining a wide variety of species along the California Coast, is threatened by a food chain collapse caused by massive increases in water diversions by the state and federal governments.

For more information about the Cucapa Camp go to http://detodos-paratodos.blogspot.com/ 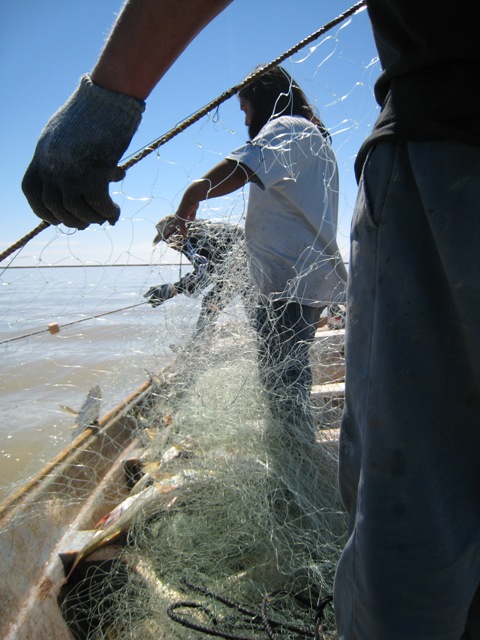 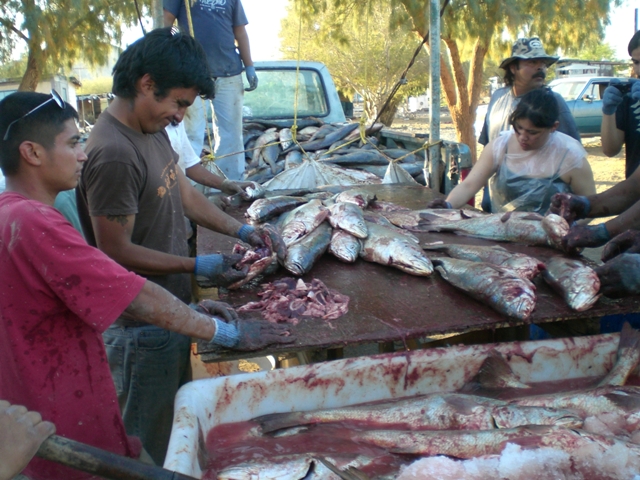 Members of Zapatista Peace Camp clean corvina before selling the fish to a fish buyer. 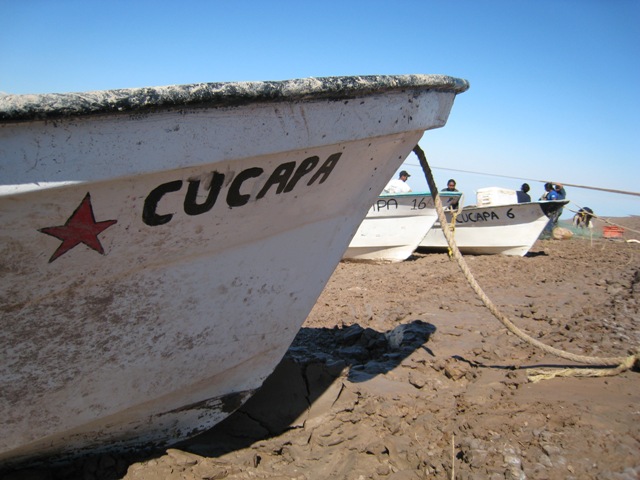 Pangas like this one, located on the shore of the Zapatista Camp, are used by the Cucapa and other indigenous people to fish for corvina and other species on the Colorado Delta and throughout the Sea of Cortez.

Photo by Joel Garcia.
Add Your Comments
LATEST COMMENTS ABOUT THIS ARTICLE
Listed below are the latest comments about this post.
These comments are submitted anonymously by website visitors.