by Mike Rhodes (MikeRhodes [at] Comcast.net)
Fresno mayor Alan Autry announced today that the City of Fresno, in a joint project with the County, will set up a homeless center in the downtown area. The center would provide this communities large homeless population a place to put up a tent, there will be portable toilets, trash bins, and a facility (probably a trailer) where homeless people can get information about social services like job training, employment, etc. 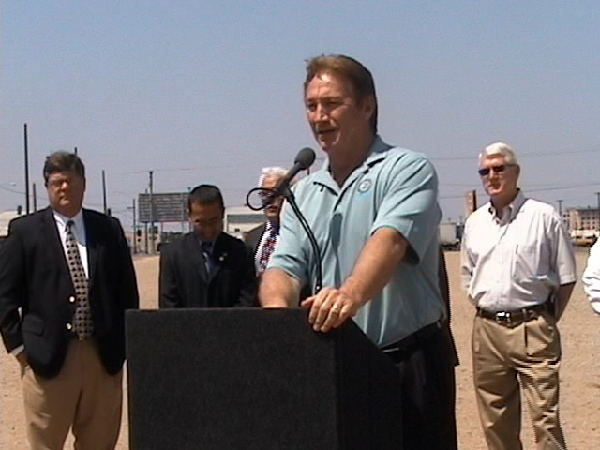 Alan Autry, the mayor of Fresno, announced a new policy today in how this city will address homelessness. The mayor said portable toilets and trash bins will be installed at a site near a downtown homeless encampment. In addition, the County of Fresno will set up a trailer to provide homeless people with information about needed services like job training, health needs, education, and more. The mayor said the homeless would be able to set up their tents on this property, where they can live with dignity and respect.

The press conference came after the Fresno City Council, last week, asked the city manager’s office to install portable toilets and trash bins for the homeless. City manager Andrew Souza said he would not follow the council’s direction, even after a 5-2 vote supported the action. The agenda item was about to come up again today, when city council member Jerry Duncan announced that an agreement had been reached with the mayor’s office and that a joint press conference would be held to announce the details.

The plan announced at the press conference goes significantly beyond the scope of the proposal before the city council. While the location for this “free zone” has not been chosen, it is a demand that this city’s homeless have raised repeatedly. The city’s policy has been to sweep the homeless from one spot to another, saying they should move into the Rescue Mission or the Poverello House (two homeless agencies in the downtown Fresno area). With official city documents showing that Fresno has over 8,000 homeless people, the less than 200 beds in those two homeless shelters was thought, by many, to be inadequate.

The mayor said the plan was to have the new homeless facility set up and running within 45-60 days. He challenged those at the press conference to hold him to that time frame. Autry, Duncan, and others that spoke made it clear that they did not see this as a solution to homelessness, but rather a better alternative to what they have been doing. Duncan said it was a step forward.

Fresno County Board of Supervisor president Bob Waterston said a task force would be formed to develop this plan. Autry said the group would be made up of representatives from the city, county, Poverello House, Rescue Mission, and the homeless themselves.

Jim Connell, executive director of the Poverello House, speaking at the press conference, said this project “will provide a somewhat better life for the people that are in the tent city now. But, please remember, this is only step one and part of what the task force is going to do is look for the longer term solutions.”

After the press conference, the issue was brought up again at the city council meeting. Andrew Souza said it was their intent to have the project up and running in 45-60 days and added that they still wanted to work on short term solutions to the health and safety concerns in the homeless encampments. That could mean portable toilets and trash bins will be set up near some downtown homeless encampments.

The day’s events brought the City of Fresno and the County of Fresno together to look at developing a common strategy on homelessness in this community. Almost everyone agrees that no one government entity can solve homelessness on their own. Council member Duncan said he hopes that bringing the city and county together and building a task force on homelessness will lead to this communities ability to bring more resources here to address this issue.

###
END_OF_DOCUMENT_TOKEN_TO_BE_REPLACED
§Press Conference video
by Mike Rhodes
Copy the code below to embed this movie into a web page:
Download Video (16.3MB) | Embed Video
Mayor Alan Autry and Fresno County Board of Supervisors speaking at today’s press conference. The video is about 4:30 minutes long.

Add Your Comments
Comments (Hide Comments)
§This is Amazing!
by Richard Cipian
I want to applaud the wonderful work of the homeless activists and the city of Fresno on getting something for the homeless off the ground. The homeless need our support!
Richard Cipian
Davis, California
Add a Comment
§Common Sense In Action
by Steve Jerome-Wyatt
Fresno's response to the Homeless situattion (there) is an example of common sense in action. If more towns and cities followed Fresno's example, things would be better for everyone concerned. Way to go Fresno: keep up the good work.

Steve Jerome-Wyatt,
Principal Community Organizer
HAGS Group of Davis, CA
Add a Comment
Support Independent Media
We are 100% volunteer and depend on your participation to sustain our efforts!