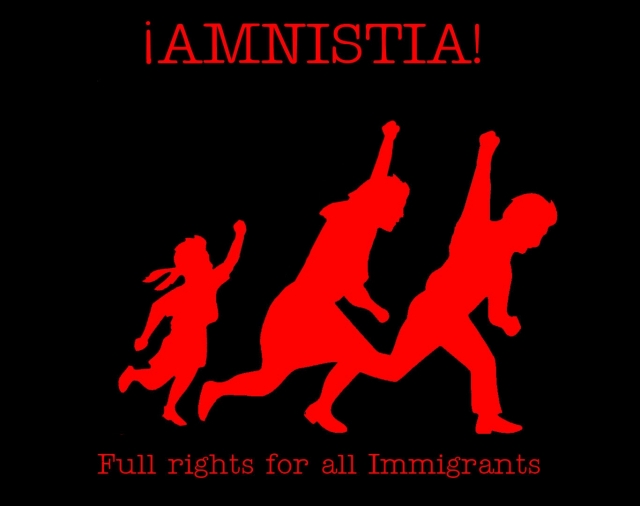 original image (1366x1080)
On Tuesday, May 1, 2007 Immigrant and Workers’ Rights groups will gather at Dolores Park at 12pm on the first anniversary of the Great Boycott of 2006, followed by The Grand March for Unconditional Amnesty to Civic Center at 1p.m. On this day the many contributions to society that the immigrant workers provide will be highlighted and applauded, and we are reminded that immigrants and workers are one and the same.

The March and Rally is part of a national day of action to call attention to the unfinished agenda of fixing our country’s broken immigration legal system, and to insist on a just and humane immigration reform law that grants full legalization for all people who work and pay taxes. Also, a more urgent need has arisen with the Immigration and Customs Enforcement (ICE) stepped up operations to capture and carry out raids. These military style operations affect thousands of families as their captured loved ones are held incommunicado, violating their due process of the law. The majority of those detained are deported, leaving their US born children in a state of shock and in extreme financial hardship. These measures do not serve to stop immigration, but forces immigrants underground, encouraging black market immigration and cause the separation of families.

Meanwhile, Congress fails immigrants by stonewalling and not addressing the concrete resolutions to fix the dysfunctional immigration system in the country or the root causes of the migration flows.

Current immigration reform proposals ignore the economic global restructuring which victimizes millions of workingwomen and men around the world, forcing them to emigrate with the intention of securing the survival of their families. Those who come to the U.S. contribute to the strengthening of our economy, enrich the diversity and development of our communities.

“Last year millions of immigrants demonstrated proudly and valiantly their strong desire for an amnesty to their immigration unlawful status” said Ramón Cardona, Director of the Richmond based organization Centro Latino Cuzcatlán and spokesperson for the Movement for an Unconditional Amnesty, “with the US Congress’s utter failure then to pass meaningful legislation except for a useless border wall, it is urgent and opportune now for congress to approve a humane and practical immigration reform and authorize, as 59% of polled Americans have expressed it, the legalization of undocumented immigrants who are working and paying taxes. For a problem of this gigantic proportion, history can’t wait any more, a solution is immediately needed.”

• Stop the brutal raids which terrorize our communities!

• Stop the separation of families!

• Stop the militarization of the borders: No more deaths!

• No to the Guest Worker Program: No exploitation, no slavery

• Respect the rights of working immigrants!

• Liberation of all detainees and closure of detention centers

Movement For an Unconditional Amnesty is a network of community, labor, religious, and civic organizations in the Bay Area. Our movement will continue to grow, to strengthen, to unite, and to create the necessary regional and national structures that will efficiently channel our firm commitment to this cause until just, humanitarian, and practical laws are put into practice.