by Mike Rhodes (MikeRhodes [at] Comcast.net)
The City of Fresno forced homeless people to move from an encampment on Olive and West Avenue, just West of Roeding Park today. Instead of taking and immediately destroying homeless peoples property, they put there things in a large container and hauled it off to a city owned warehouse in downtown Fresno. The photo below was taken shortly before the clean-up began. 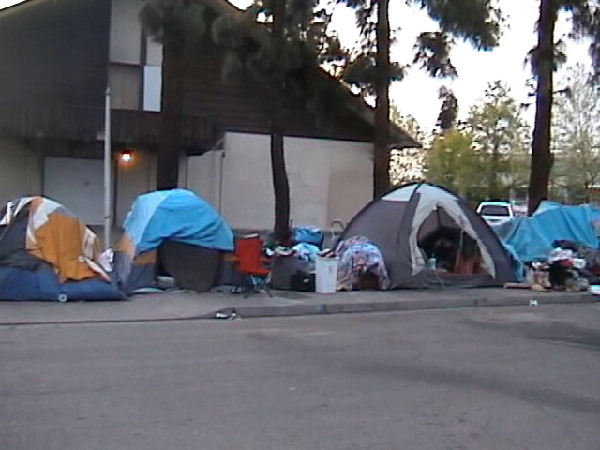 The City of Fresno evicted a group of homeless people living on a sidewalk across from Roeding Park today. Notices went up a week ago < see: http://www.indybay.org/newsitems/2007/03/29/18385669.php > that a “clean-up” would take place on Thursday, April 5. Dee, a homeless woman at the encampment, upon learning about the clean-up, said “but, where are we supposed to go?”

Dee and other homeless residents in the encampment said the police came by several times yesterday and reminded them to get out. Dave (not his real name) said the police came by about every hour last night shining their spotlights into his tent. Dave said he was told by officer Oliver Baines that if homeless people were not gone by 8 AM today, they would be arrested. But, by 8:30 AM everything was calm, there was not a cop in sight, and most of the residents were starting to pack up there things.

By 9 AM the city started rolling in their equipment. The police in unmarked cars were the first to arrive, followed by squad cars, clean up crews from the sanitation department, garbage trucks, city trucks with high pressure water guns, and more police. The city crews out numbered the homeless two to one.

Seeing that the city was serious in there effort to evict the residents and dismantle the encampment, the pace of moving tents, clothing, and other property picked up. By a little after 9 AM most of the homeless had moved their property to a church a half mile away where they were told they could stay for a few days.

Fresno Police officer Bruce Hartman told me at about 9:30 AM that they believed the property remaining on the sidewalk was trash. He said a homeless woman told him he could begin the clean-up. I told him that she does not speak for all homeless people and how does he know that someone, who is not here right now, didn’t leave something he or she considers valuable on the sidewalk. The argument left the police and city sanitation department in somewhat of a momentary dilemma. They soon got over it.

Philip Withers, the head of the sanitation department, directed his crew to begin the clean up operation. The directions given by Withers seemed somewhat vague and ambiguous, leaving a great deal of discretion to the clean up crew who were dressed in bright orange jump suits, a face mask, and breathing filter.

The clean-up crew seemed to do a basically good job of putting anything with obvious value in a storage container and the random plastic bags, pallets, and old food in the back of the garbage truck. However, I did notice an American Flag that was thrown in the garbage truck as well as some clothes and blankets.

After everything was removed from the sidewalk, the city graffiti abatement truck rolled up and hosed down the area with a high pressure hose. While things were finishing up at West and Olive Avenue, a homeless man on a bicycle told Alphonso Williams that the police were at his encampment, about a block away. When he arrived, Al was told by officer Hartman, that he would have to leave. Al and his wife Sherry live beside a building that was owned by the Chevron station next door. Al said he had received permission from the manager to stay there. Hartman said he had a signed complaint from several businesses and demanded that he leave today. Al negotiated for another day and Hartman, big hearted guy that he is, agreed.

Afterward, Al told me that officer Hartman had taken the letter of complaint to the manager at the Chevron station and the Taco Bell and asked them to sign it. “I have always gotten along fine with the guy at the Chevron station,” Al said. “It doesn’t make any sense. . . where are we supposed to go?”

I asked Captain Dave Belluomni, the new commander of the southwest police division where these homeless people were supposed to go. He pointed in the direction of downtown Fresno and said the homeless should go to the Rescue Mission and Poverello House. The City of Fresno estimates that there are over 8,000 homeless people in Fresno. The Rescue Mission has about 120 beds for men only and the Poverello House has beds for about 50 people in tool sheds they have set up in the “Village of Hope.” The tool sheds have no heating or cooling. A lot of homeless people have told me they would not keep their dog in one of those tool sheds.

The homeless people at the West and Olive encampment have been displaced. They will no longer be visible to those who come to play tennis, right across the street at Roeding Park. The problem with the City of Fresno’s new policy on the homeless , according to homeless advocate Bryan Apper with the Catholic Worker, is that “it does not provide them with any place to go where they can be safe. They simply chase them from one place to another.”

END_OF_DOCUMENT_TOKEN_TO_BE_REPLACED
§Swept Away
by Mike Rhodes 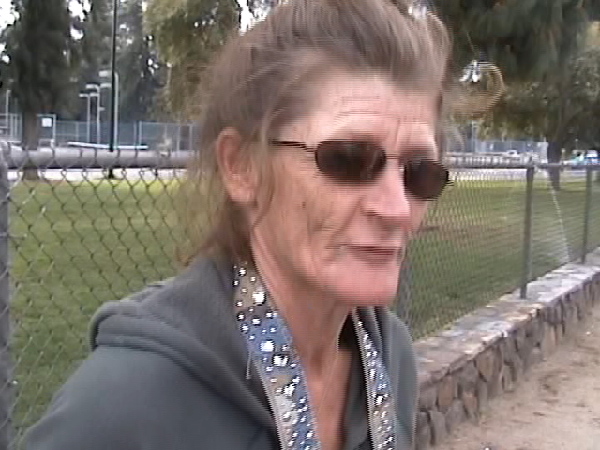 Dee, and the other residents in the homeless encampment at Olive and West Avenue in Fresno were forced to move today. Dee was not a happy camper and repeatedly complained as the encampment was de-constructed. 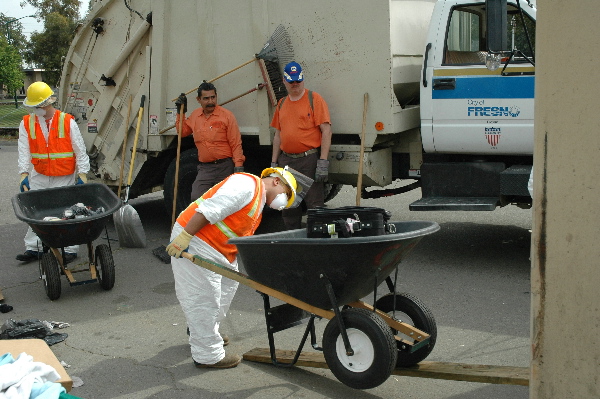 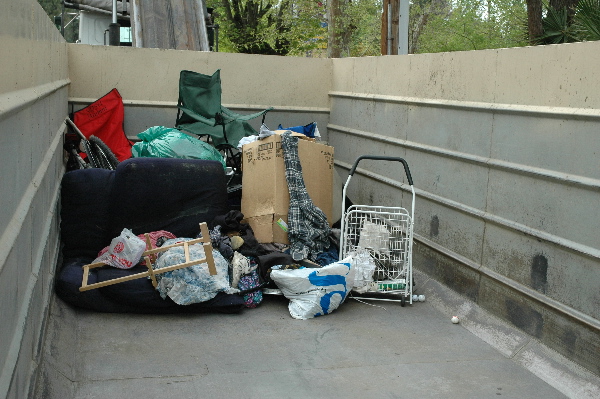 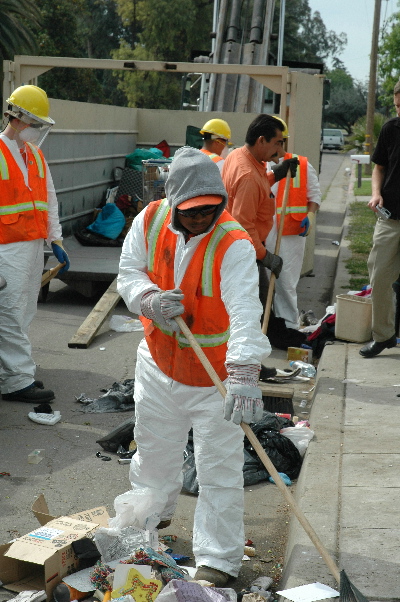 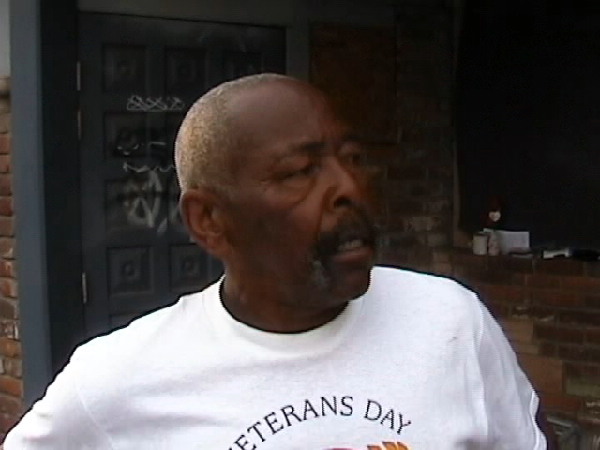 Al and his wife live about a block from the encampment that was “cleaned-up” today. Officer Hartman told him he would have to move. Al was told that all of the nearby businesses signed a letter of complaint against his encampment. Al claims he has good relations with the business owners and that Hartman forced the business owners to sign the letter. 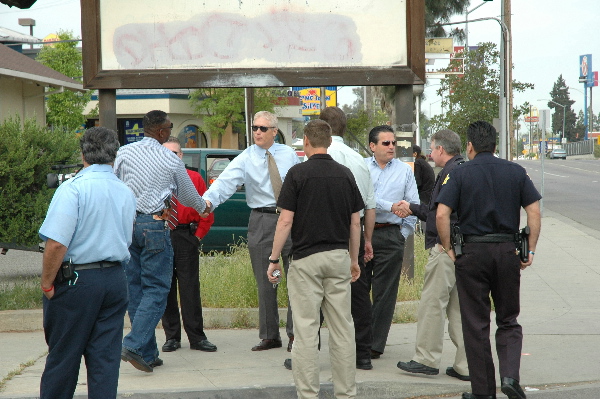 James Betts, with tie in the center, shakes hands with officer Rey Wallace. Betts is defending the City of Fresno in the lawsuit filed last year by homeless people. Rey Wallace was the architect of the policy of taking and destroying homeless peoples property that led to the lawsuit.
Add Your Comments
Comments (Hide Comments)
§Nary a Word
by Steve
As a frequent tennis player who knows all the tennis crowd out there, I cannot confirm Captain Dave Belluomni statement to me that the reason the City did this was that they had received complaints from people in the park and people who's homes border on the homeless encampment. I've never heard anybody complain; rather there have been sympathetic comments. Belluomni said they're trying to get better attendance for new exhibits at the park. This was probably the real trigger.
Add a Comment
Support Independent Media
We are 100% volunteer and depend on your participation to sustain our efforts!