Add an Event
Newswire
Calendar
Features
Home
Donate
From the Open-Publishing Calendar
From the Open-Publishing Newswire
Indybay Feature
Publish to Newswire
Add an Event
Related Categories: Santa Cruz Indymedia | South Bay | U.S. | Anti-War
Local US Marine Reservist Robert Zabala granted CO (Conscientious Objectors) status.
by Agusto Cesar Sandino Segundo
Wednesday Apr 4th, 2007 11:28 PM
UC Santa Cruz alumni Robert Zabala of San Jose, CA made national news headlines all across the US in both mainstream and independent media recently. Zabala, joined the US Marine Corp and based on experiences he had at boot camp and basic training developed beliefs and opinions that led him to file for conscientious objector status. Through assistance from the GI Rights Counseling team, a project of the Resource Center for Nonviolence (http://www.rcnv.org , site remodel coming soon!) he learned more about the actual process and received guidance and referrals to legal assistance to actually file a CO application. He was denied initially by the military but was ordered discharged from the corp by federal US District Court Judge James Ware in a decision handed down Friday. Reposted below are links to several sources of information, both mainstream and indypendent. The Aaron Glantz interview on Kats Korner blog is particularly good and surprisingly the KGO story does a good job of explaining the legal decision and what it means. For background the SF Chronicle does a decent job of filling in the back story and a bit of his reasons.
The common ills
http://thecommonills.blogspot.com/2007/04/robert-zabala-granted-co-status-by.html

Jeff Gannon.com (Yes, the very same Jeff Gannon who was discovered to be a fake journalist ringer for the Administration in the White House press corp... oh yeah, something about being a former gay prostitute/model/escort thingy also). I include this nutbag only in some insincere attempt to present the "other" side, whatever that means....
http://www.jeffgannon.com/archives/general/index.html#a000899

Read it for yourself and decide what you think about Robert and his actions. Feel free to drop a comment and keep your eyes peeled for some upcoming events featuring Robert brought to you from the GI Rights Team and the RCNV. 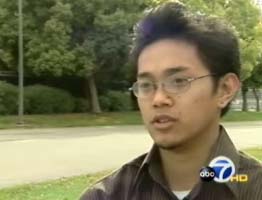 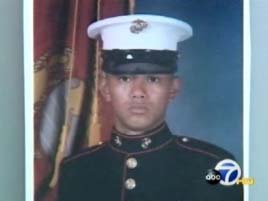 Robert, as a U.S. Marine.
Add Your Comments
Support Independent Media
We are 100% volunteer and depend on your participation to sustain our efforts!