Add an Event
Newswire
Calendar
Features
Home
Donate
From the Open-Publishing Calendar
From the Open-Publishing Newswire
Indybay Feature
Publish to Newswire
Add an Event
Related Categories: U.S. | Anti-War
411 on 911 - Rally and March for 9/11 Truth and Impeachment
by Carol Brouillet
Tuesday Apr 3rd, 2007 9:55 AM
4/11/2007 heralds an auspicious convergence of the 9/11 Truth Movement and the Impeachment Movement in Lytton Plaza, launching pad for the 9/11 Truth and Impeachment Movements. Monthly 9/11 Visibility actions will be taking place, and the rally will urge people everywhere to participate in the national shopping boycott to impeach for peace and justice (from Tax Day to Earth Day- April 15th-22nd) and to spell out "Impeach" on the national day of impeachment action, April 28th. Tell Congress, Wall Street "We don't buy the big lie about 9/11" and "We're not buying it" anymore. Join the effort in Palo Alto- or wherever you may be! 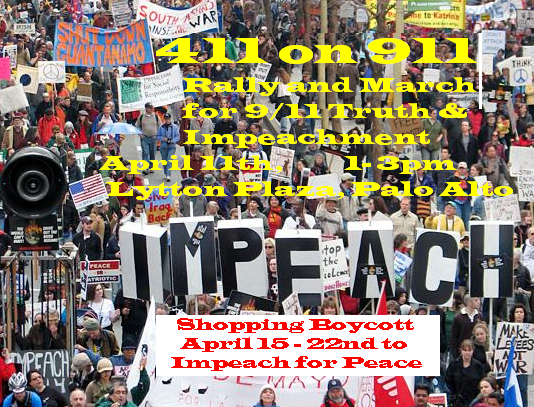 On Wednesday, April 11, 2007, protesters will rally at 1:00 p.m. at Lytton Plaza in downtown Palo Alto to demand 9/11 Truth and the impeachment of Bush/Cheney. Speakers will include Janette MacKinlay—a survivor of the 9/11 attacks; David Kubiak—International Campaign Advisor of 911Truth.org; Gabriel Day—organizer of the “9/11- Revealing the Truth, Reclaiming the Future” conference; Ed Rippy—of the Northern California 9/11 Truth Alliance; and Riva Enteen—of the National Lawyers Guild. Music will be provided by “Annie and the Vets.” The march will begin at 2:00 p.m. and will conclude at Congresswoman Anna Eshoo’s office at 698 Emerson Street.

The grassroots demand for an investigation into 9/11 began in 2001, taking stronger form in January of 2002 with marches on Senator Feinstein and Congresswoman Eshoo’s offices. From a small weekly “Listening Project” in downtown Palo Alto (every Wednesday from 11:00 a.m. to 1:00 p.m.), the 9/11 Truth movement has grown into an international effort with countless websites and numerous documentaries, books and articles criticizing and challenging the 9/11 Commission Report, the NIST Report, the “War on Terrorism,” the PATRIOT Act, and the policies of the Bush Administration that hinge upon the official story. In January of 2003 the demands of the 9/11 Truth movement to “stop the 9/11 cover-up, repeal the PATRIOT Act, and demand pre-emptive impeachment of Bush,” prior to the war, were dismissed by Eshoo and the Congress, who continue to fund the war and have failed to respond to growing public demands for the impeachment of Bush, Cheney, and Gonzalez. This failure can be seen in Eshoo’s response to Carol Brouillet after the recent March 14th Impeachment rally in Palo Alto:

“I've lived through an impeachment process and witnessed firsthand how it tears the country apart. The election in November was a resounding rejection of the President's policies and the policies of his party. I think it's time to bring the country together and move forward. In my view, impeachment will heavily distract from the important work of reversing the disastrous course this Administration has set and will virtually bring to a halt progress on important issues including healthcare and global warming.”

Activists have been outraged to see Congress expand funding for the war and work with those widely considered to be "war criminals." Activists are calling for a truly independent investigation of 9/11, a nationwide shopping boycott from Tax Day to Earth Day, and a national day of ”impeachment actions” on April 28th. Citizen-led initiatives are taking place across the country to force a real investigation of 9/11 (Vermont, for instance), and to push Congress to initiate impeachment through state legislatures, as well as through city and county resolutions.

Grassroots efforts have included “becoming the media.” Activists have distributed millions of “Deception Dollars,” tens of thousands of DVDs, produced television shows, radio shows, music videos, CDs to reach people in the streets and via the internet. Polls show they have won over public opinion and that only 16% of Americans believe what the Administration has told them about 9/11.* Impeachment activists placed their bodies on the beach to spell "Impeach!" in San Francisco, to send a message to Pelosi and Congress. On April 28th people are encouraged to spell "Impeach" everywhere, forcing the topic into the national discourse. The national shopping boycott is designed to help people flex their economic muscle and send a message to the corporations who sponsor politicians and profit from war. There is a convergence of the anti-war, anti-corporate globalization, peace and justice, impeachment and truth movements taking place now, seeking to turn policies away from fear-mongering and war and towards community building, healing and a just peace. The rally and march are part of a larger continuum of educational and empowerment events addressing 9/11 and impeachment.

http://www.communitycurrency.org/impeach.html
Add Your Comments
LATEST COMMENTS ABOUT THIS ARTICLE
Listed below are the latest comments about this post.
These comments are submitted anonymously by website visitors.