Notice of Trespass and Clean-Up

by Mike Rhodes (MikeRhodes [at] Comcast.net)
The City of Fresno is threatening to dismantle another homeless encampment. They are doing this even though there is a preliminary injunction to prevent them from taking and immediately destroying homeless peoples property. Will the homeless resist? Has the city figured out a way around the court order? See article below for the details. Below is the notice that was posted on Thursday, March 29, 2007 on the homeless encampment just west of Roeding Park in Fresno. 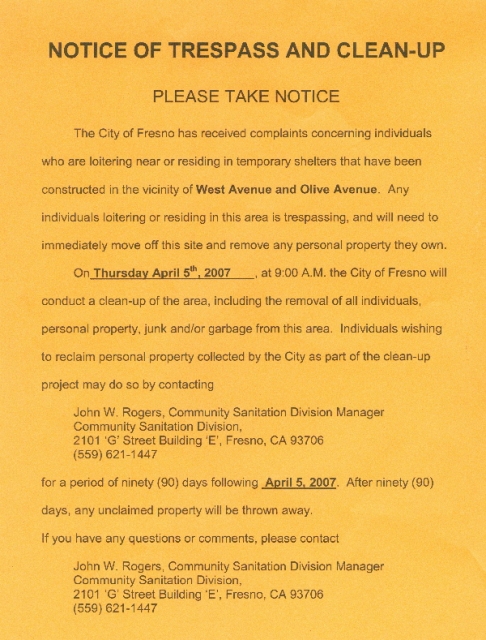 The City of Fresno has ordered about 25 homeless people to leave an encampment near Roeding Park. The notice, which was posted today, gives the group one week to leave or have their property taken from them. Because of a court order issued in November 2006, the city can no longer take and immediately destroy homeless peoples property. The preliminary injunction was issued as a result of a lawsuit filed on behalf of homeless people in Fresno. For more information about the lawsuit, see: http://www.indybay.org/newsitems/2006/10/17/18321050.php .

Dee, one of the homeless women who lives at the encampment, asked “where are we supposed to go?” She was visibly angry that she is being told to leave. Dee said there is nowhere to go where the city will not find them and force another eviction. She pointed across Olive Avenue and said “maybe we will move over there next Wednesday. If the city comes gives us another one week notice to move, we will move across the street again.” The homeless people at this encampment tonight were frustrated by what seemed to them to be the senseless nature of the city policy. Many of them said that a more permanent solution needs to be found.

Starla, another homeless woman who lives at the encampment near Roeding Park, says she cleans the encampment every day. She says that most of the neighbors are friendly and the Taco Bell next door has been very nice to them. There are restrooms at the park and at several nearby businesses. Starla and Dee said there are about 100 or so homeless people who live in the area.

Al is one of the plaintiffs in the lawsuit against the City of Fresno. He is the person who called and alerted me to the posting of the notices at the encampment. Al lives a short distance from the encampment and does not expect to be affected by the “clean-up.” Nonetheless, he is concerned for everyone’s safety and what might happen next. “The thing that bothers me.” Al said, “is that people don’t have anywhere to move to.” Dee said “homeless people are like everyone else. People here have just had one thing or another happen and they are out on the street. It could happen to anyone.”

The City of Fresno seems to have developed a response to the preliminary injunction by developing a strategy of threats and intimidation that leads to their being able to clear out encampments in areas where they don’t want homeless people to live. City council members have discussed this issue from the Dias, discussing with staff how they should contact property owners, encouraging them to expel homeless people. If people do not leave, the police are sent out to talk to them. If, as was the case at a homeless encampment on a ditch bank near McKinley and First street, the people just refuse to move, the police are sent in to “escort” them off the premises.

When the California Highway Patrol ordered, at gun point, homeless residents off a strip of Caltrans land known as “The Island,” the homeless people left without incident. The ordering of homeless people off one property ends up with them going someplace else. All property is owned by someone - it might be public land, owned by an individual or a business. There is no place in Fresno where homeless people can go and be left alone.

Since the preliminary injunction and this new policy carried out by the city, some of the encampments in the downtown area have become quite large. There are two main encampments in the downtown area, each with dozens of shelters and maybe 250 people between them. Many other homeless people (at least hundreds, perhaps as many as one thousand) live scattered around downtown. Nobody knows how many homeless people live in Fresno, but official city documents put the number at over 8,000. Most homeless advocates think that number is an underestimate.

In recent weeks, City of Fresno work crews have begun cleaning up trash from two of the largest downtown homeless encampments. Trash had been accumulating, some of the piles were over four feet high, and they were becoming a heath and safety concern. City crews moved in with bulldozers and a garbage truck, carefully removing the trash, without destroying any homeless peoples property. This was something city officials claimed, in federal court, could not be done.

In a meeting on March 16, with assistant city manager Bruce Rudd and the mayor’s deputy chief of staff Kyle Loreto, I requested that the city put portable toilets, trash bins, and potable water near three of the downtown encampments. They said the mayor’s position on this issue was that to provide the homeless with any city services would be to legitimize the encampments, therefore it would not be done. The City of Fresno, under the leadership of mayor Autry will apparently continue its failed policy of harassing the homeless in the hope that they either leave town, disappear, die, or go through a “rehabilitation” program (preferably run by a right wing fundamentalist Christian group).

Fortunately, Fresno is not a dictatorship run by mayor Alan Autry. There is an effort being made on the City Council to bypass the mayor and put portable toilets and trash bins up whether the mayor supports it or not. Fresno residents can support the homeless by contacting their city council representative and letting them know how they feel about this issue. Contact information for city council members is available at: http://www.fresno.gov/Government/CityCouncil/Default.htm .

Groups in the Fresno Area that are working in support of homeless peoples rights, include:

For a list of articles and documents about the struggle for civil liberties for homeless people in Fresno, see: http://www.fresnoalliance.com/home/homelessness.htm
END_OF_DOCUMENT_TOKEN_TO_BE_REPLACED
Add Your Comments
Support Independent Media
We are 100% volunteer and depend on your participation to sustain our efforts!