Kucinich visits Albany-Vows to look into 9/11

by DK2008.us
Kucinich said he wants to launch his own miniature investigation into “a narrow portion'’ of the 9/11 attacks. 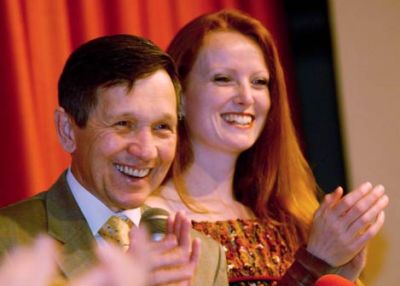 Kucinich said he wants to launch his own miniature investigation into “a narrow portion'’ of the 9/11 attacks.

He was short on details, but did say that the House Government Oversight Domestic Policy Subcommittee, of which he is chairman, will be
looking at “a few discrepancies in the public record'’ that remain unresolved in the official 9/11 commission’s final report, which was issued in July of 2004.
reported from blog
http://blogs.timesunion.com/capitol/?p=4182

ALBANY -- Presidential candidate Dennis Kucinich predicted Sunday that by the time the New Hampshire primary arrives early next year, so many Americans will have tired of the war in Iraq that his peace platform will make him the choice for the Democratic nomination.

"They all voted for (war funding)," Kucinich said of his fellow Democratic opponents -- former Sen. John Edwards, Sen. Hillary Rodham Clinton and Sen. Barack Obama. He said he is the only Democrat who can boast he's always been against the war, which, he told a packed house Sunday evening in Albany, "was based on lies."

Kucinich, a Democratic congressman from Ohio, was the guest speaker at Upper Hudson Peace Action's 25th anniversary dinner. Some 300 people squeezed into the basement of First Church in Albany.

The potluck supper featured many vegetarian dishes, but it was Kucinich who brought the red meat.

He ran down his platform of hot topics among progressive voters: ending the occupation of Iraq, canceling the North American Free Trade Agreement and working toward a universal, single-payer system of health care.

He also said that as chairman of a House subcommittee on domestic policy, he plans to launch an investigation of "a narrow portion" of the Sept. 11, 2001, terrorist attacks. He offered few details, but said his subcommittee would be looking at "a few, specific discrepancies in the public record."
http://timesunion.com/AspStories/story.asp?storyID=575248&ca...

Like, er... Just how in the world did a bearded cavedweller five thousand miles away shut down the Air National Guard on 9-11 without some help from insiders?

Or, perhaps just how was the Department of Defense unable to defend it's own Headquarters with more than an hour and a half lead time?

I'd like to know the answer to those questions too!
Add a Comment
§9/11 was an Inside Job
by Shawn Cooper

The trigger for this war on terror and war on our civil liberties began with 9/11. I have been researching 9/11 for over four years and there are serious unanswered questions from that day. Although, most in the mainstream media and lots of others call anyone that questions the official story a nut job, crazy or unpatriotic I appreciate that you would involve yourself in this delicate subject. People are attacked for proposing alternative theories without discussing the subject matter of what the person is proposing.

There are many important unanswered questions from 9/11, I will propose 5. I hope you investigate these for yourself. Thank you for being a beacon of hope and peace.

1) Never in the history of steel structures has a building collapsed from fire yet 3 did on 9/11; WTC tower 1,2 & 7. all three buildings came down at free fall speed with no resistance, tower 7 was never hit by an airplane yet came down symetrically in seven seconds? Additionally odd, tower 2 fell before tower 1 although tower 1 was hit first and tower 2 was hit with a glancing blow. The explosion/ collapse in tower 2 started above where the plane hit the tower?

2) There is no large plane wreckage in front of the Pentagon from the 757 that hit it. Taking from the official story, the 757 that hit the pentagon flew over a highway, parallel and 15 to 20 feet above the ground and impacted the pentagon between the 1st and 2nd floor. (official story) The airplane did not leave any markings or large debris (ex wings) on the front of the pentagon. the 757 suppossedly was sucked into a 16ft by 24ft hole, before the ceiling collapsed a 1/2 hour later, and incinerated. how did this plane hit only 15 ft above the ground after descending so rapidly without ever hitting the ground and flown by an amateur pilot? The 3 slides the pentagon released to the public shows a small shaped device flying horizontally, very low to the ground and leaving a small smoke trail. How come the Pentagon has not released video from the cameras mounted on the roof? lastly, after travelling through three rings of the Pentagon, the plane or whatever it was left a small circular exit hole in the third ring.

3. All four hijacked planes flew for an average of 40
minutes, 1 hour 50 minutes total, without any fighter jet intercept over NY and Washington. As you are aware, NY and Washington are some of the most protected airspace in the world.

4. Where is the plane wreckage from the plane crash in Shanksville, PA? in pictures and video all you see is a small ditch with no fires, plane debris, seats, bodies, etc.?

5. How was the Patriot Act and the War on Terror so
quickly developed after 9/11? Was this new program a reaction to 9/11 or something that was worked on before September 11th and just conveniently ready for a terrorist attack?

9/11 was an inside job, a false flag operation. Sadly, the sophistication of this operation points more towards state sponsored terrorism than a small group of bandits inside a cave. How often have our leaders evoked the memory of 9/11 to rally our people for certain causes (i.e. Iraq)?

9/11 is the basis and trigger for the War on Terror and the occupation and control of the middle east with hopes of conquering Asia as all great empires have done. See Zbigniew Brzezinski's the Grand Chessboard, Samuel P. Huntington's the Clash of Civilizations and the information below on Paul Wolfowitz for more on this.

I have outlined below additional examples of the 9/11 story that are not being reported.

To start, where is the wreckage of the 757 that hit the front of the pentagon, in pics and video?

Flight 77 approached the front of the pentagon, turned an unheard of 320 degrees at full speed, flew low enough over a highway to clip light poles and struck between the first and second floor of the pentagon. The amateur pilot, terrorist, was somehow able to drop this 757 over the highway, fly horizontal 10-15 feet above the ground for 300 feet and then strike its target withing the first and second floor? c'mon, how is that possible?

The 757 leaves a 16 ft by 12 ft entry and circular exit hole. This exit hole was made by flight 77 passing through three Pentagon rings. No way, decide for yourself. (google- pentagon hole)

Riddle me this...How did 4 hijacked planes, fly over the worlds most protected airspace, Washington and NY, for a total of 1 hour and 50 minutes at an average of 40 minutes each after turning off their transponders and signaling a hijack WITHOUT any NORAD fighter jet intercept? The average time for NORAD to intercept a plane is 10 minutes. When the transponders are turned off this does not mean the plane is no longer visible on radar.

The collapse of all three towers 1, 2 and 7 is very strange. wtc tower 1 and 2 fell close to a free fall rate into its own footprint in 8 seconds. explosions were heard by eyewitnesses including police officers and firefighters before and during the collapse. The official story says that jet fuel weakened the support columns and caused the floors to pancake onto one another. This would not explain how the buildings show no resistance as they drop at a free fall rate and how most of the debris is obliterated into a very fine white dust.

Oddly, the North Tower was hit first at its center yet fell 24 minutes after the South Tower. The South Tower, hit second, falling first, was hit by flight 175 in a glancing blow to the side sending most of its jet fuel outside the building in a huge explosion. I find it strange how the second tower hit seemed to heat up and fall much quicker?

I hope you investigate the evidence of 9/11 yourself. google is a great resource. good luck.

END_OF_DOCUMENT_TOKEN_TO_BE_REPLACED
Add a Comment
Support Independent Media
We are 100% volunteer and depend on your participation to sustain our efforts!