Add an Event
Newswire
Calendar
Features
Home
Donate
From the Open-Publishing Calendar
From the Open-Publishing Newswire
Indybay Feature
Publish to Newswire
Add an Event
Related Categories: U.S. | Fault Lines | Health, Housing & Public Services
Rust Belt Ruckus: Inhabiting Industrial Collapse
by Chimney Swift (info [at] faultlines.org)
Thursday Mar 22nd, 2007 11:57 AM
Staring off of my porch toward the river I see dozens of buildings: dilapidated, sinking into the river, being demolished, and wasting away. I scan the horizon, and through the blizzard I see a huge city, a once bustling metropolis, now eerily silent. I look down my street, and on either side are vacancies; some in bad shape but the majority are inhabitable. I stand on the porch of the biggest one I could find and smile, and then I go back inside and stoke the fire. Life is good to me, and I feel invincible. There is an old Earth First! slogan that comes to mind: “visualize industrial collapse.” Not only can I visualize it by looking out the window, but I am living here—right smack dab in the midst of it—like a king.
The Great Lakes region is an economic phenomenon. In its heyday, the Rust Belt’s economic activity formed a significant sector of the American economy including manufacturing and the automobile industry. In 1900, Buffalo rivaled New York City as one of the country’s most populous cities. By the 1920s, with the steel industry at its peak and the Erie Canal opening up the Great Lakes to trade, Buffalo was bursting at the seams.

But when the Great Depression set in, the steel industry took a dive, setting the stage for the economic growth of other Great Lakes cities such as Cleveland, Chicago, and Milwaukee. Buffalo’s economy slowed and slowed as the bulk of industrial jobs disappeared to South America and Canada.

The population has been in steady decline since the 1950s. The infrastructure is in place for the functioning of a major city but it is so spread out and under-funded that this once ‘all American city’ is now the ideal reeding ground for squatters. Everything is abandoned everything is falling apart—and we are dancing in the ruins and making out like bandits.

There is a serious housing crisis here in Buffalo. PUSH (People United for Sustainable Housing) has estimated that there are 100,000 abandoned houses and 20,000 awaiting demolition. According to the Buffalo News, there is an overwhelming 40 percent vacancy stretching out to the suburbs where a ‘plague of vacancies’ is sickening an already hurting economy. Many of them are in limbo due to utilities lines and mortgages, and tens of thousands of houses are held as assets by private creditors such as our very own ex-governor George Pataki. In parts of our neighborhood, there are two or three un-maintained houses on every block. In fact, in 2003 the city issued a state of financial emergency and created the Buffalo Fiscal Stability Authority to handle the collapsing economy.

Taking What’s Ours, and the City Conceding

A group of anarcho-punks had been looking at the mansion for some time. In early summer, a local punk house was evicted while we had access to a moving truck for free, so we piled ouches, furniture, personal possessions, and tools into it and parked in front of the house at noon on a weekend. After prying all the boards off the windows, attaching a shut off valve to the water main in the basement, and beginning initial cleaning and sanitizing, we began living in the house full time.

A few months later, we received a letter from the city addressed to the former owners about housing code violations. We had just met the assessor and told him about our situation; he seemed supportive and even assessed the house at the lowest possible level to “give us a tax break”—or because it was a dilapidated heap of shambles. An inspector came by and listed many of our exterior violations including gutters, lead paints, siding and roof corrosion, and broken windows. We had already repaired a few of these by then and decided to go to court in lieu of the previous owners. There we were: four rag-tag kids wearing thrift store sports coats standing in front of the judge.

We explained that we had begun living in the house and fixing the violations. The judge was interested in this because the courts were having trouble demolishing the house as it was in limbo, and since it was an eyesore and community problem, he wanted us to fix it up. In fact, we cut a lot of red tape by bringing ourselves to court and assuming the role of owner-occupant, which gave the judge and prosecutor a few ideas. Being that there are so many vacancies in limbo and the city can’t keep up, they were considering using our house, among others, as a model for rewriting housing court law. This blew our minds. He said that he would not prosecute us for the major violations and would work on getting us the deed through a process called receivership. They needed us!

We have been here for almost two years, and if we can make the minimum of ten then we can claim Adverse Possession. We’ve been to court four times. We pay our taxes and handle our violations and are close with all of our neighbors, so I am not worried. I would say we have more security than most other families, and none of us have jobs! Our situation is amazing, but it is not case specific. These conditions exist all over the Rust Belt.

Squatting in the 21st century is tricky. Here in the United States, without liberal occupancy laws like most places in Europe, squatting creates a dilemma. The security and stability that we as Americans are so used to vanishes once you sidestep the law. In other words, what is the point of squatting if only to work toward the inevitability of eviction? Why go out of your way to live in shambles, to rebuild everything only to lose it? This leaves a bad taste in many mouths.

However, the way one traditionally achieves security is by relinquishing all power to authority and living by its rules, enduring its tribulations. This is not a safe or secure way to live at all.

The safety in having a home is rooted in the idea of permanence, but many of my friends go from lease agreement to lease agreement every 6 months; rent a room here or there out of financial necessity; endure the inconvenience of sharing space with strangers. The modern living situation is actually very temporary.

Meanwhile, we have been in our squatted mansion longer than many of our rent-paying neighbors. We have lived here longer than many people usually live in an apartment. We put a lot of time into this place and we could lose it, but we are fundamentally less vulnerable than tenants. We deal with the courts directly only regarding housing violations and—best of all—we don’t pay rent to a landlord.

Squatting makes the personal political by resisting the privatization of space. If loitering is a threat to property then trespassing is a war on it. And squatting is our victory over it, however temporary this autonomous zone will be in the end. In fact, squatting has existed much longer than the idea of property itself.

The world unfurled itself to us like the petals of a rose. This is not to say that it can’t happen elsewhere, but from personal experience, we have had little to no problems squatting here and have even been encouraged by neighbors and the state to turn a ransacked hovel into the house of our dreams. 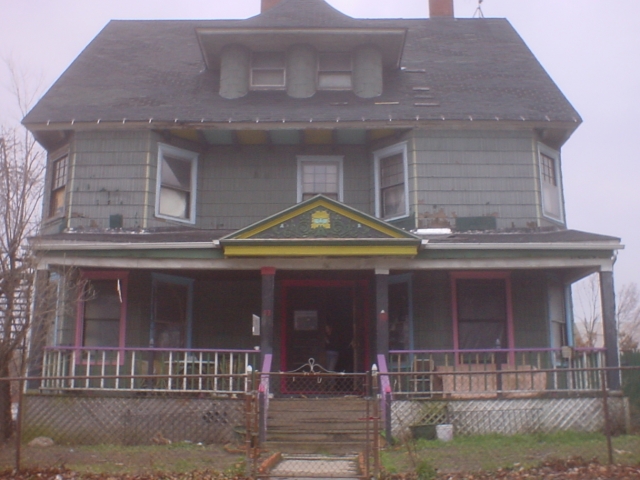 §mansions for everyone
by revphil
Saturday Apr 10th, 2010 9:06 AM
beautiful! that is a great story. I guess it takes a place as depressed as Buffalo to make the powers that be accept alternatives. thanks for sharing!
http://www.BikeSmut.com
Add a Comment
Support Independent Media
We are 100% volunteer and depend on your participation to sustain our efforts!