Add an Event
Newswire
Calendar
Features
Home
Donate
From the Open-Publishing Calendar
From the Open-Publishing Newswire
Indybay Feature
Publish to Newswire
Add an Event
Related Categories: International | Arts + Action | Fault Lines | Health, Housing & Public Services
K-Town Riots: The Eviction of Copenhagen’s Finest Squat
by Hannah E. Dobbz
Wednesday Mar 21st, 2007 2:50 AM
In the frigid Copenhagen morning of December 14, hundreds of squatters stand unflinchingly beneath visible wisps of breath. Europe’s “The Final Countdown” resonates within the historic walls of the brick building at 69 Jagtvej. Masked activists shoot fireworks from the roof as the Danish media ogle from the street below. Twenty-four years after its inception, Ungdomshuset has officially become an illegal squat.
In 1982, the city gave 69 Jagtvej to the youth of Copenhagen who, in turn, named it Ungdomshuset, or "The Youth House." Since, the building has provided an extensive list of community services including a cinema, a soup kitchen, a bar, various workshops, rehearsal spaces, and the famous annual K-Town Festival, which draws an international crowd.

But despite its charitable contributions to the punk, squatter, and broader community of Denmark and beyond, in 2000, the City Council reconsidered its decision from 18 years prior and resold the property. If that weren’t enough, the buyers of 69 Jagtvej were, incidentally enough, a rightwing fundamentalist Christian organization called Faderhuset or, ironically, "The Father's House." And, almost as if mocking the anarchists of Ungdomshuset, the Christians intend to make the old squat their new headquarters.

After being embroiled in a legal battle for nearly six years, on August 28, 2006, the National Court ruled that Faderhuset does indeed own the building, making an eviction order perfectly legitimate. The official date was announced as December 14, although it was stated that no police force would be used until the new year.

On December 14, Ungdomshuset looks less friendly than it once did. The colorful murals have been obscured by revolutionary banners, the tall windows have been securely boarded, and every entrance or exit has been stiffly barricaded. The house is quiet and spooky, as most of the supporters have gone to the demonstration—that is, three marches all converging (not unlike that final scene from the politically diluted V for Vendetta film) and concluding with a punk gig. Those who remain are groggy and on edge, having endured a myriad of sleepless nights full of emergency drills and the continuing reality that their home could be violently evicted at any moment. Thus, their thoughts are riddled with happy visions of Ungdomshuset Past and unclear projections of Ungdomshuset Future: Will Faderhuset transform the beloved community center into overpriced apartments? A metro stop? A parking lot?

The tale of ,Ungdomshuset distinctly dispels any American myth that the battle for European squats is over. The idea that Europe is merely some spoiled, radical fantasyland brimming with magically free living situations is a commonly accepted fallacy among US squatters. Because the laws around occupation and the establishment of residency are often more lenient (that is to say that they exist) in most EU countries, there is an underlying assumption that the legal system is actually happy to have these rent-evading crusties dirtying up the neighborhood with their ideals of mutual aid and anarchy. But if the tale of Ungdomshuset can serve as evidence of anything, it is the fact that the battle continues: whether we are fighting for houses in Kazakhstan, a school in Oaxaca, a farm in Los Angeles, or a 24-year-old community center in Copenhagen, we can be sure that the war for a space in which to exist is universal and ongoing.

This war presented itself yet again on December 16, 2006, when the patience for bureaucracy ran out and the streets of Copenhagen felt the heat of another kind of negotiations: one of history's most and least effective tactics, both wonderfully satisfying and horribly traumatic, the thing that black-clad anarchists are known for doing best: RIOT.

A thousand punks, anarchists, activists, socialists, and even hippies marched with the sound system truck blaring NWA and Twisted Sister’s “We’re Not Gonna Take It,” and it wasn’t long before riot vans blocked off the street and lines of cops began to beat people back.

Eoin Fullum, an anarchist from Ireland, spent ten days in Danish prison in defense of Ungdomshuset.

“We threw everything we had at [the cops],” he said. “Paint bombs, cobblestones, rockets, big frikkin’ sticks of dynamite, we bashed them with big fuck-off iron bars and crow bars. It was beautiful, I tell you.”

The police reacted with concussion grenades and CS gas. Although CS is classified as “non-lethal,” it is worth noting that when the chemical is metabolized, cyanide can be detected in human tissue.

“Picture that scene in Total Recall when Quaid and Melina get sucked out onto the surface of Mars and they’re choking and their eyes are popping out and shit—that’s what it felt like,” said Fullum.

In the chaos (that has also been likened to a battle scene from Lord of the Rings), Fullum lost his affinity group and found himself and others surrounded by upwards of 300 cops with dogs. He spent the following ten days (including a memorable Christmas) in Danish prison waiting to be deported. Danes were released first and foreigners last. Most were bussed to the border of their own country such as Sweden or Germany, but in the case of Ireland, “no plane tickets were available” before the holiday. The majority of the 300 arrestees were released without charges before the legal 14-day mark, but three Danes still remain in custody. The Danish Anarchist Black Cross has been sending prisoners money, socks, and underwear, and forwarding letters from supporters.

At one point during the riots, in an attempt to circumvent the police, a group of rioters knocked on a neighbor’s apartment door. She eyed them up and down and then said, “Just wipe your feet.” A hundred rioters in masks carrying large sticks proceeded to wipe their feet, articulate a “thank you,” and then file through the apartment and out the other side.

By early February there was still no word of a complete eviction at Ungdomshuset. So the squatters would wait with an armory inside their house. They would wait with iron bars and dynamite.

The police printed their plan for eviction in a Copenhagen newspaper in December. Because the house was barricaded in a way that assumed the enemy would enter from the bottom, authorities intended to lower a crate full of cops onto the roof using a helicopter, at which point they could gas the whole building from above.

Everyone knew that when the cops came to take away their home, there would no longer be a choice to go in or out; everyone would have to stay and fight. There were stockpiles of rocks and bottles on the roof and beside all partially barricaded windows. There were gasmasks and headlamps next to each bed.

The chief of police had said that if “less than 25 people die, it will be a good eviction.”

In the early morning hours of March 1, 2007, Ungdomshuset was violently cleared of its occupants with the use of a military helicopter and two cranes. Roughly 3,000 people rioted over the next four days, with riots peaking on March 3. Reports say that 643 protesters were arrested (including 140 foreigners), and at least 25 were hospitalized. Protests in solidarity with the squatters were held all over Europe. At 8AM on March 5, Ungdomshuset was demolished. From Fault Lines #20
§Ungdomshuset from the front
by Indymedia Wednesday Mar 21st, 2007 2:50 AM 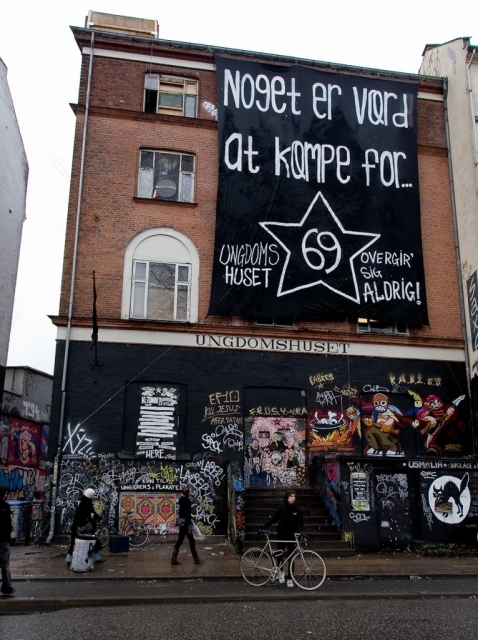 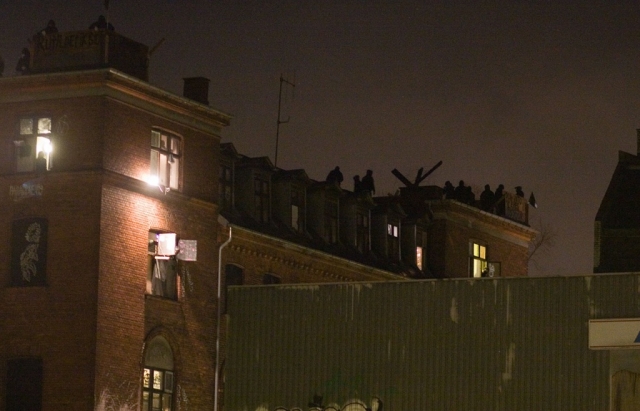 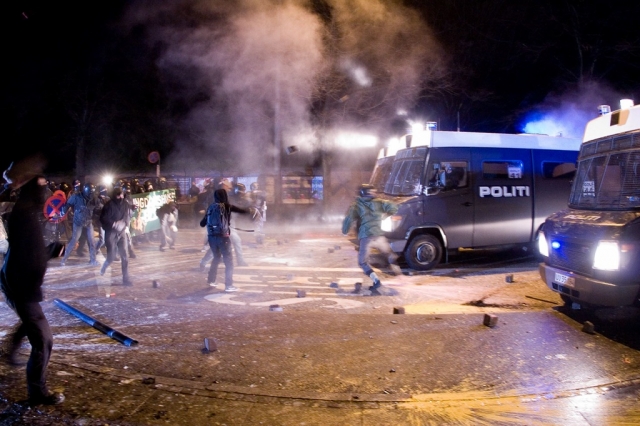 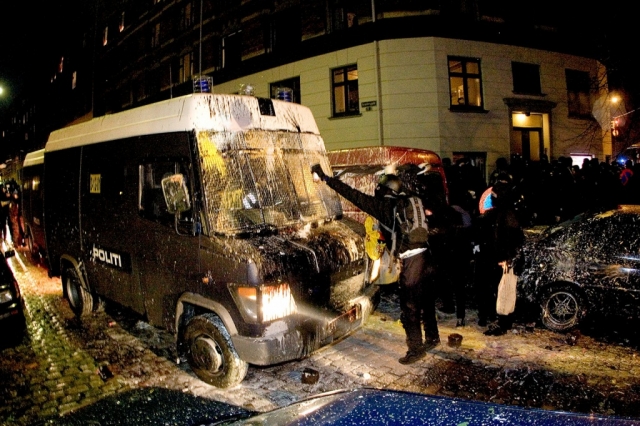 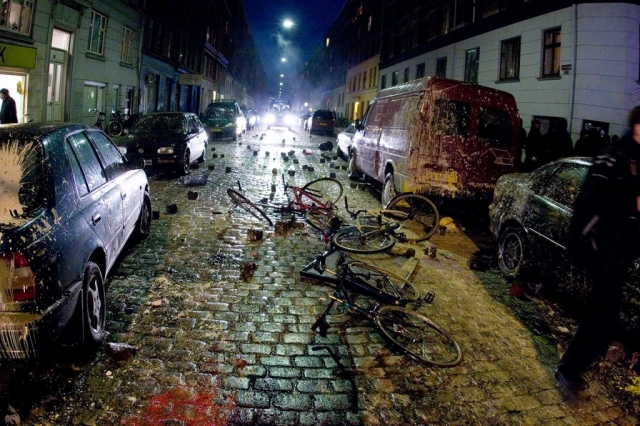 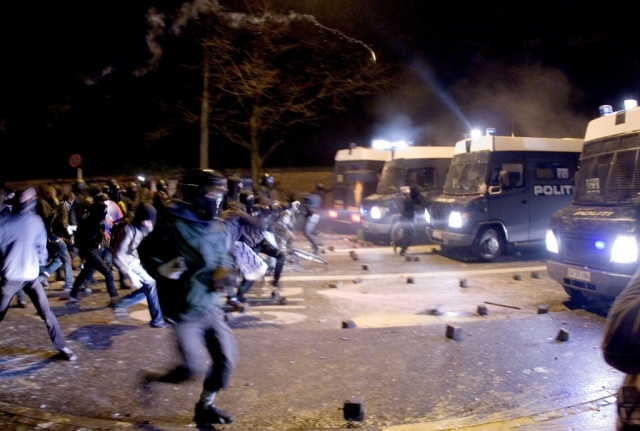 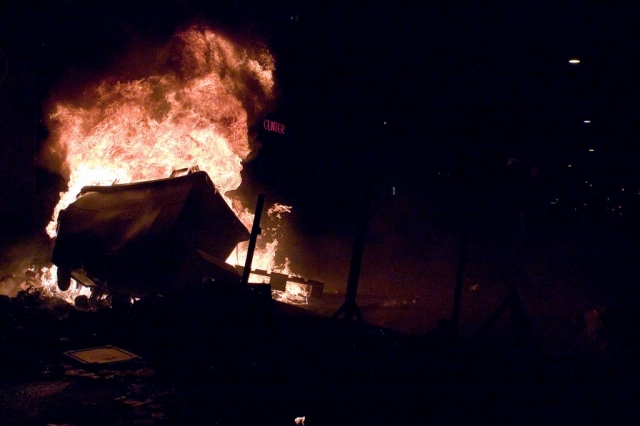 original image (1024x682)
Add Your Comments
LATEST COMMENTS ABOUT THIS ARTICLE
Listed below are the latest comments about this post.
These comments are submitted anonymously by website visitors.