Add an Event
Newswire
Calendar
Features
Home
Donate
From the Open-Publishing Calendar
From the Open-Publishing Newswire
Indybay Feature
Publish to Newswire
Add an Event
Related Categories: San Francisco | Anti-War
SF Die-Ins Commemorate Iraq War Anniversary
by Liz Highleyman (liz [at] black-rose.com)
Monday Mar 19th, 2007 6:16 PM
Several hundred activists turned out in downtown San Francisco on March 19 to mark the fourth anniversary of the start of the war in Iraq. More than 50 protesters were arrested taking part in "die-ins" that blocked Market Street throughout much of the afternoon. 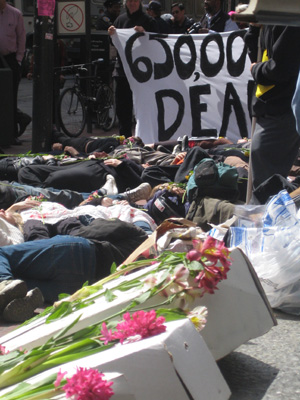 The die-ins began at noon at four locations along Market Street, including Civic Center and the corner of Montgomery Street outside the office of Senator Dianne Feinstein (D-CA), a consistent supporter of the war.

At the Montgomery intersection, 100 activists died-in on the sidewalk as others read the names of people killed in Iraq, naming two U.S. soldiers for every 200 dead Iraqis, to reflect the actual ratio of deaths in the war.

At about 1 pm, half the group moved onto Market Street, blocking traffic for about half an hour. After several warnings, about 40 protesters lying in the street were arrested, including 76-year-old Pentagon whistle-blower Daniel Ellsberg.

As the first batch of arrestees was hauled away, more protesters, led by the Brass Liberation Orchestra, joined the group from another die-in at the Embarcadero. A march then proceeded to the Powell Street intersection, where activists again blocked Market Street and about 10 more were arrested.

“This war is being done in our name and we all have to do something about it,” said Rahula Janowski, one of the arrestees. “I don’t want to see another mother with empty arms. Taking the day off work and losing a day’s pay is nothing compared to losing your family.”

Richard Dunn, who served as a military medic during the Vietnam War, knows that loss well. One of his sons died in Iraq two months ago, and another is deployed there currently. “Please end this war,” he said as he fought back tears. “I love this country, but I don’t like the way this government is acting. If no one says anything, nothing will change.” 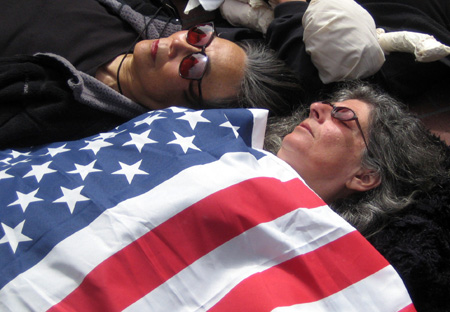 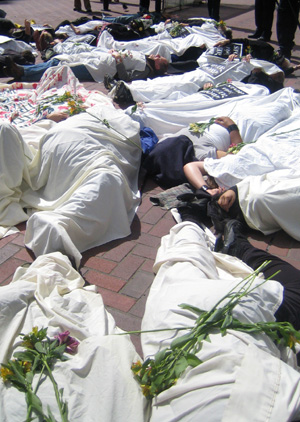 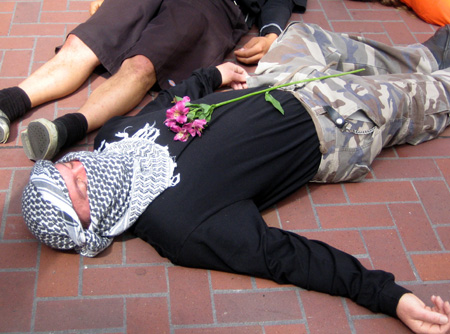 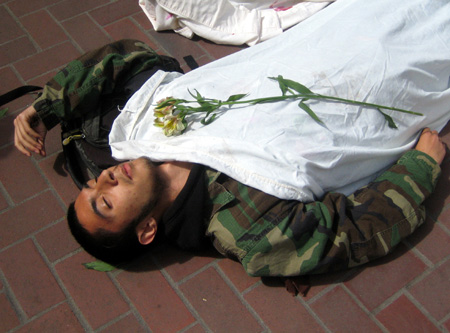 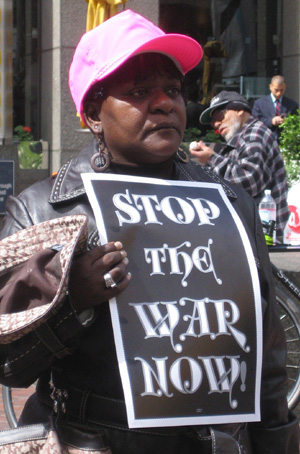 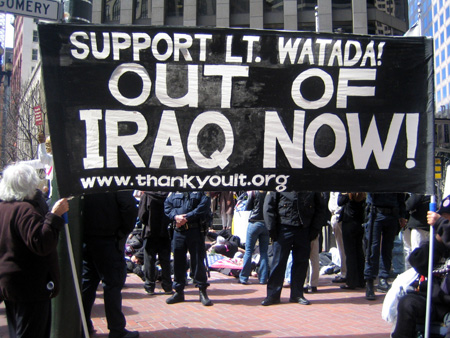 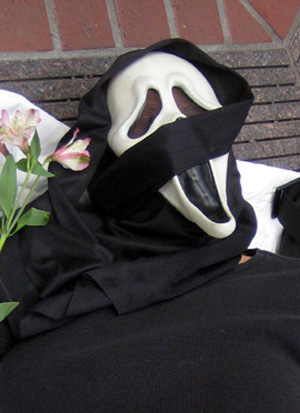 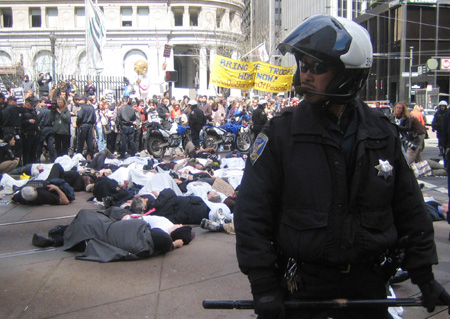 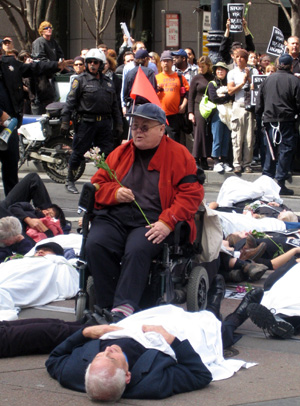 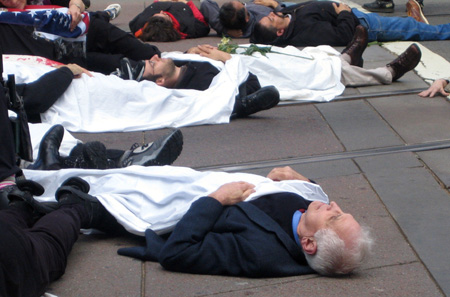 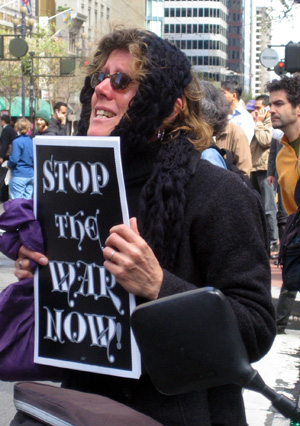 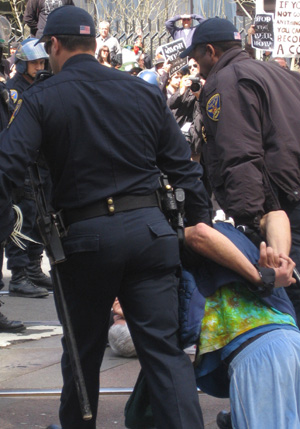 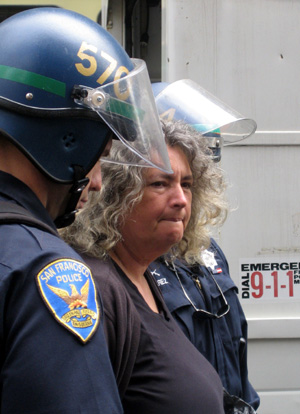 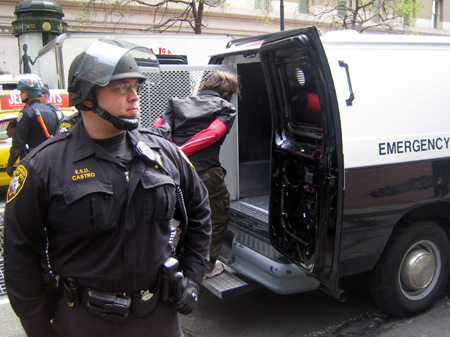 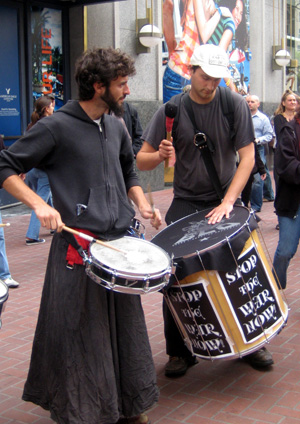 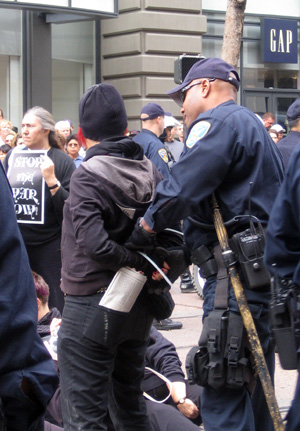 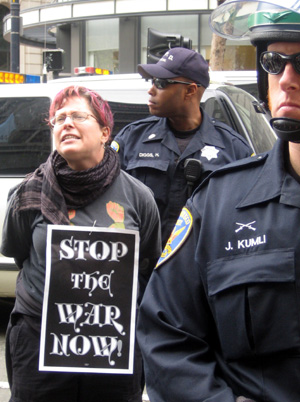 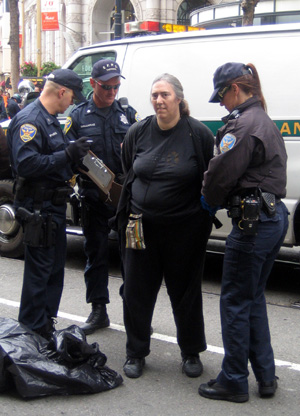 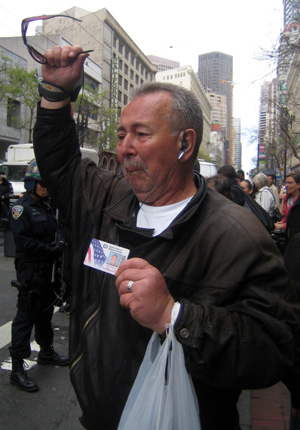