Add an Event
Newswire
Calendar
Features
Home
Donate
From the Open-Publishing Calendar
From the Open-Publishing Newswire
Indybay Feature
Publish to Newswire
Add an Event
Related Categories: San Francisco | Anti-War
About 60 people arrested today in die-in action on Market Street
by Jody Paulson (jodypaulson [at] bluebottle.com)
Monday Mar 19th, 2007 5:28 PM
I participated at actions at the cable car turnaround and at Montgomery and Market and Powell and Market. About 45 people were arrested in the streets at the former and around 15 people sat/lay down in the street at the latter.
First, at around noon, there were many people (I'd say around 50) who lay down at the cable-car turnaround on market, though this was on the sidewalk and while there were many police there, no one bothered us. Later, we went up to Montgomery and many people lay down on the sidewalk, but then after that many went into the streets and lay down (including myself, but I got up after I was warned). About 45 people were arrested there, to lots of noise and a great band! After everyone was taken away, we followed the band to Powell and Market where many of us spontaneously just sat/lay down in the streets (again, including myself). So about 60 of us were arrested overall. I'm pretty sure everyone has been released by now, except maybe one girl who refused to give her name, I'm not sure what happened to her. Great action, people! Many thanks to the band, you guys added a lot of energy to the whole thing.
http://jpaulson.blogspot.com
Add Your Comments 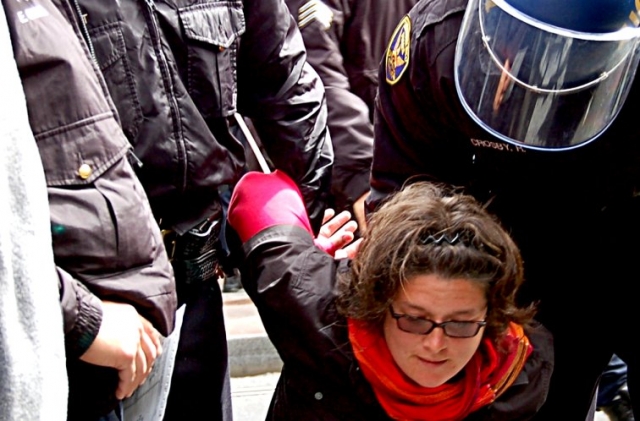 original image (756x498)
At Least 45 were arrested today at a "Die-In" to represent casualties of the war in Iraq. Protesters called for "Troops Out Now!" as SF police arrested them for occupying Market street in outrage at the fourth year as the war in Iraq drags into its fourth year today in defiance of worldwide popular outrage at its legacy of torture, slaughter of innocents and vast misappropriation of both Iraq's oil, US tax money and mercenary and contract labor from around the world.

Some police indulged in gratutous mistreatment of the nonviolent protesters, subjecting them to pain holds and rough treatment as they kneeled prone and handcuffed.
http://www.indybay.org/newsitems/2007/03/1...
Add a Comment
Support Independent Media
We are 100% volunteer and depend on your participation to sustain our efforts!