Add an Event
Newswire
Calendar
Features
Home
Donate
From the Open-Publishing Calendar
From the Open-Publishing Newswire
Indybay Feature
Publish to Newswire
Add an Event
Related Categories: Americas | International
Venezuela: we denounce the forced delocation of indigenous
by wayùu of the Perija Mountains
Wednesday Mar 14th, 2007 7:49 AM
We denounce the forced relocation of indigenous families from their
traditional lands at the hands of the Venezuelan government and the
multi-national coal corporations. 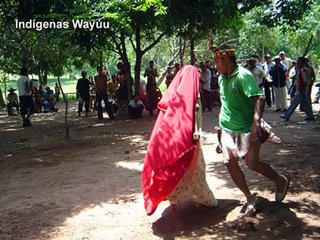 We, the indigenous Wayúu inhabitants of the Socuy, Mache and Cachirí
river baisns in the Sierra de Perijá, in the western state of Zulia, in
the Bolivarian Republic of Venezuela, inform all women and men of the
world that our humble community, just as the Yukpa and Barí
communities, will be forcefully relocated by the national government so
that it may hand over our territories to multi-national coal companies,
because the innards of the imperial monster needs more cheap coal to
continue plaguing the peoples of the world with death, misery, and
hunger.

There cannot be a XXI Century Socialism in our country without us, the
indigenous –
and if there are no rights to autonomous territories, free of mines and
large hereditary landholders, only some expressed in legal papers – but
as a nuisance to miners, oil people, gas people and large hereditary
land holders, today they wish to eliminate us with their racist tale of
sovereignty and national unity, as if we the indigenous are not also
sons the god Maleiwua, Guaicaipuro, and Bolivar.

In these moments, the National Government, thru its Corporation of
Development of the Zulia Region (Corpozulia), heads a final attack
along with multi-national company operators against our humble
indigenous families, to obligate us to sell them our lands, just as
they imposed on us years ago during the opening of the Paso Diablo
Mine* and the North Mine in the Guasare river basin, and more recently
in the Las Carmelitas Mine near the Los Tres Rios dam.

We denounce the genocide and ecocide that is deepening in the foothills
of the Sierra de Perijá along the border region with Colombia on the
western arm of the great Andean Mountain range by the hands of
Corpozulia, Carbozuliam Anglo American Coal, Inter-American Coal,
Peabody, Carbonífera Caño Seco represented by the former president of
Telecom Eiram, Brendan Hynes from Ireland, Corporación Carbones del
Perijá of Chile represented by María Victoria Quiroga M. and Álvaro
Guell V., Energy Resources, among others.

* Paso Diablo Mine is owned impart by Peabody Coal/Peabody Energy
Corporation.
http://www.peabodyenergy.com/Operations/CoalOperations-Venezuela.asp
http://tierraylibertad.contrapoder.org.ve
Add Your Comments
§Native American Resistance to Peabody Coal & forced relocation
by ** (blackmesais [at] riseup.net)
Wednesday Mar 21st, 2007 6:01 PM
There have been over 14,000 forced relocations on Black Mesa, Arizona of mainly Dineh, or Navajo, people's and also Hopi peoples due to the US government working with Peabody Coal. After nearly 40 years, there are still families resisting the coal company and US and puppet governments!

http://www.blackmesais.org
Add a Comment
Support Independent Media
We are 100% volunteer and depend on your participation to sustain our efforts!