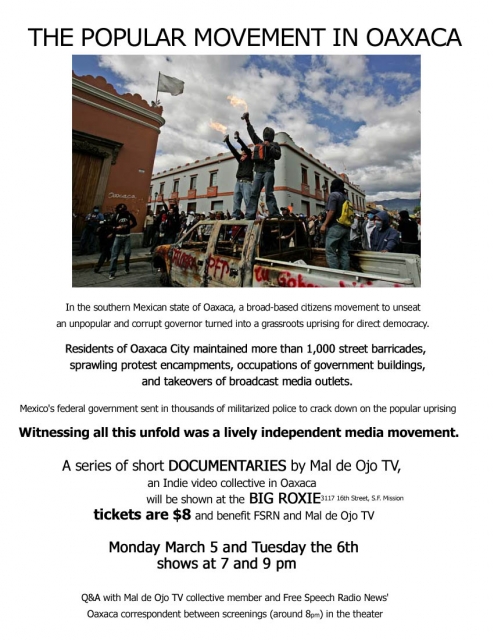 In the Bicentennial of Juarez - This is What Happened in Oaxaca (8:08): An overview of the popular uprising from June to November of 2006

About the Struggle (8:11): Reflections on the who, what, why, and how of the popular movement in Oaxaca

Viguera (5:16) Federal police take revenge on a neighborhood that blocked their entrance into Oaxaca City

The Victory of All Saints Day (11:49) Local people win a seven hour street battle against police attempting to clear barricades around the state university

In Memoriam (8:55) The Day of the Dead memorial for Indymedia videographer Brad Will in the barrio where he was killed

Slideshow with Music (9:04) A photo slideshow from June to November of 2006 set to music by Oaxaca's Jaime Luna

Vladimir Flores and Shannon Young, Oaxaca correspondents for Free Speech Radio News, will be on hand to introduce the films and answer questions.

Free Speech Radio News is the only progressive, nationally-syndicated, daily news program on the air. fsrn.org
http://maldeojotv.net
Add Your Comments
Support Independent Media
We are 100% volunteer and depend on your participation to sustain our efforts!