Add an Event
Newswire
Calendar
Features
Home
Donate
From the Open-Publishing Calendar
From the Open-Publishing Newswire
Indybay Feature
Publish to Newswire
Add an Event
Related Categories: Americas | International
Brad Will memorials in Oaxaca
by tristan
Tuesday Feb 27th, 2007 10:34 AM
My (and many others') friend Brad was shot to death in Oaxaca, Mexico in October as many know. Here are some photos i took and an article I wrote. 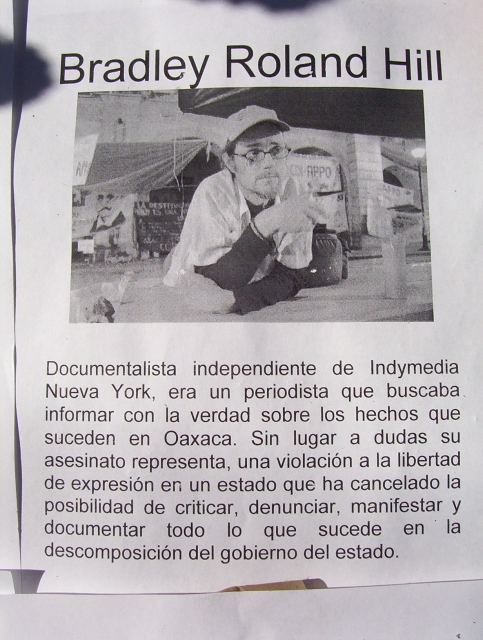 original image (1232x1632)
Translations of photo:
"Independant reporter from Indymedia New York, he was a journalist that sought to tell
the truth about events that happened in Oaxaca. Without a doubt his murder represents a
violation of free expression in a state that has cancelled the possibility to criticize,
denounce, protest and document all that has fallowed the decomposition of the government
of the state."

By tristan and ayr

We called him Brad from Indymedia or Brad from New York or Badger when he did forest
defense. He always had a big smile and a bigger hug for anyone he came across. “Its all
good bro,” he would say, if police were surrounding us or if he was inviting me to
sleep on someone else’s floor. He was positive and encouraging and took an honest
interest in everyone around him without criticism. He loved to help others, to
tell stories, to sing and play the guitar. He was an anarchist who touched the lives of
all sorts of people. As a catalyst he had the energy to kick-start any situation.
His lanky, shirtless form filled any empty space, which made him hard to live with but
great to pull off events with. He felt at home in any situation and could fit in
anywhere, from riots to playing with kids to hanging out with people that spoke a
different
language. He didn’t join things because they were cool, people joined what he
was doing because it was cool (or they didn't).

Although he was from a fairly wealthy background he began to open his own eyes. Looking
around
he saw injustices and set about to change things. He took a stand for what he believed
in and could see the big picture of how things worked in the world and how others were
oppressed by large systems.

In the nineties he was a a squatter and community gardener in New Yorkforest defender on
the West Coast. When the WTO met in Seattle he worked with the Independent Media
Center (IMC/Indymedia). After that he moved back to NY. He went to
Europe and some pretty crazy protests. At some point he got a video camera and a new
calling at protests. He used it to de-escalate, as a weapon and as a shield all the while
collecting peoples’ histories.

He really appreciated people where they were at. Whether people were extremely militant
or total pacifists he was down to work with them. He supported all kinds of events and
was genuinely excited about it all. He was one of a rare breed that can appreciate
everything. There are always debates among activists over whether we should organize big
events or focus on organizing in the local community, record history or make it, educate
or take action, defend the forest or work for social justice, smash a window or have a
sit in, have a party or hold a meeting. To Brad the answer was “Yes! Lets go.” He
would grab a ski mask or a sunflower hat, a video camera, a guitar or a bullhorn and get
going. He had long hair that he often held back with a black t-shirt sleeve. This could
easily double as a mask.

“Even if one garden falls there are so many more to save.” Brad had a passion for life
and
found it wherever it flourished. He connected his energizing passion to the passion of
others and found the living elements of an ecosystem or a community. He traveled the
earth to preserve these beautiful places. He said shit straight up and opposed, “The
complete leveling of culture, [the] clearcutting of values.”

For the last five years Brad had been traveling to Latin America. He was excited about
the culture, the food, the song, dancing, the spirit of the people. He wanted to be a
part of this spirit until it filled him. He saw that when you are oppressed then a
natural reaction is to rebel. He honored that and felt it was necessary and if that’s
where all the action is going to be he was going to be there too. He wanted to be a part
of it all, and tell the story.

Brad took on danger but was not reckless. He was willing to take risks and challenge
power because good things can happen when we step out of our comfort zones. Beautiful
moments arrive when we reclaim our lives, its magic. Some people think of joy as
invalidating the purposefulness of his work but he accomplished a lot and enjoyed every
moment. He loved a good riot and a good party. Brad knew everyone and everyone knew
him. There are few that have had such an impact on so many activists, on the movement
and on the world as Brad surely has had.

A social upheaval began in Oaxaca, Mexico. Brad was 36 years old and he had been a
committed
activist for a long time.
He maintained a calm vibe in crazy situations. People cautioned him not to go but he
was determined to go anyway. Many of us supported Brad’s decision and knew that if Brad
was called to go, then Oaxaca needed him. He was an anarchist and a firm believer in
direct democracy. The APPO organization, in Oaxaca, is probably the most democratic
organization of its size in the world. Brad found this very inspiring and its militant
forms of action exciting. The situation was scary to him as well since a dozen protestors
had been killed at that point. He wasn’t sure if he was up for it but he knew he had to
be. The danger was secondary to documenting and participating in this very human
struggle. On October 27 paramilitaries attacked a barricade in the Santa Lucia
neighborhood. Brad went to film and didn’t stop even as the bullets flew past him. He
ran to the front, bravely sharing the danger with the people of Oaxaca. Then a bullet
pierced his stomach and he died before reaching the hospital.

Brad had sent out his last report a week before on October 17, Death in Oaxaca:
“Yesterday I went for a walk with the good people of Oaxaca – in the afternoon they
showed me where the bullets hit the wall – they numbered the ones they could reach – it
reminded me of the doorway of amadou diallo’s home – but here the graffiti was there
before the shooting began – one bullet they didn’t number was still in his head – he was
41 years old – alejandro garcia hernandez.”
“A young man who wanted to only be called marco was [there] when the shooting happened –
a bullet passed through his shoulder – 19 years old – said he hadn’t told his parents yet
– said he had been at the barricade every night – said he was going back as soon as the
wound closed – absolutely.”

Now the indomitable spirit of Brad is gone and I think we are left with a question. He
died doing what he loved.
He died for what he believed in. Maybe he even died for us. We all have to die at some
point. So, what are you going to die for? Whatever it is I can see Brad reaching out
his long arms, “Its all good bro,” and giving you a hug. That’s how I remember him. 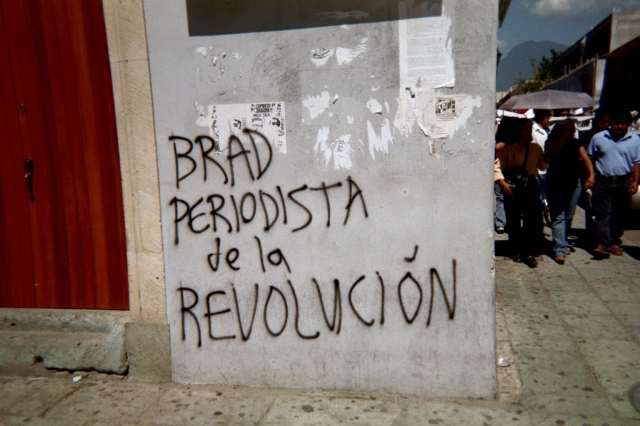 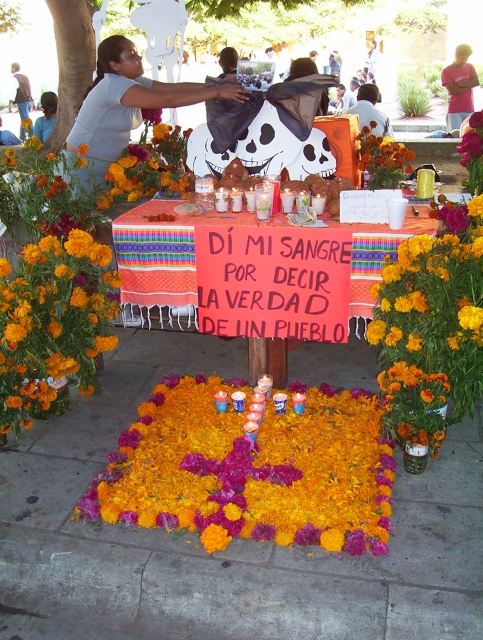 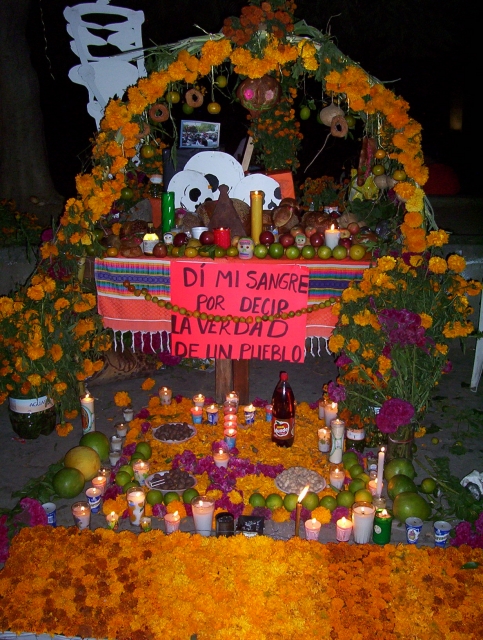 original image (1232x1632)
Set up at Santo Domingo, where the teachers hung out after the Oct. 29 eviction from the Zocolo/central square. Later a picture of Brad was added.
§Brad's Alter at the University
by tristan Tuesday Feb 27th, 2007 10:34 AM 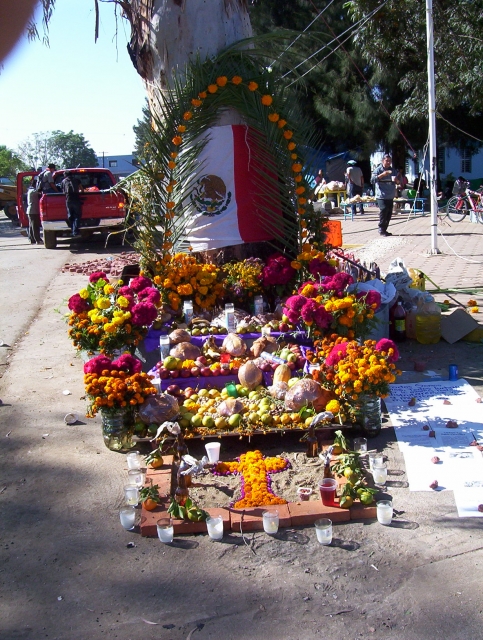 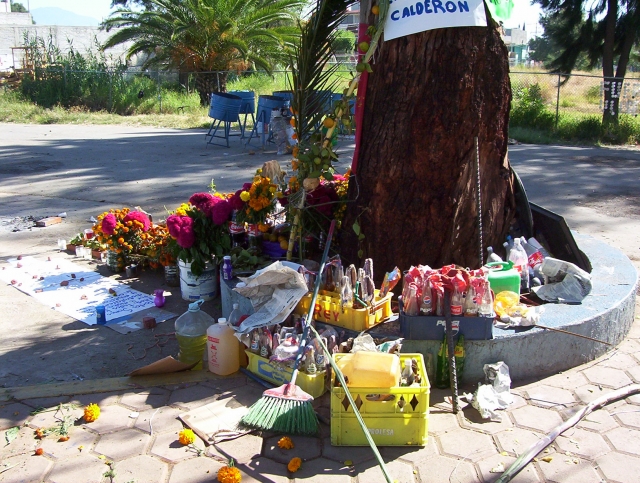 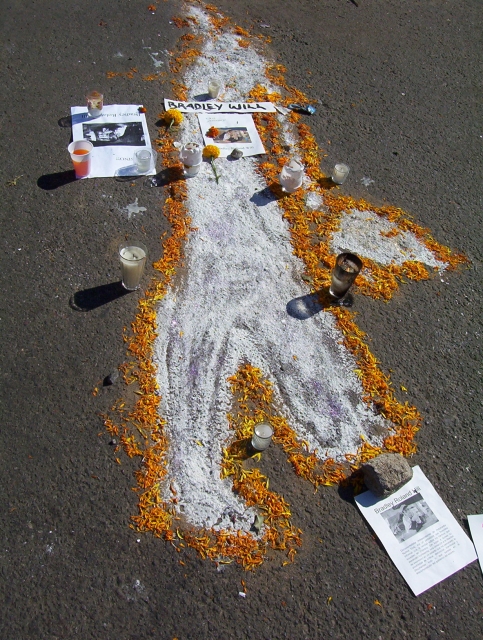 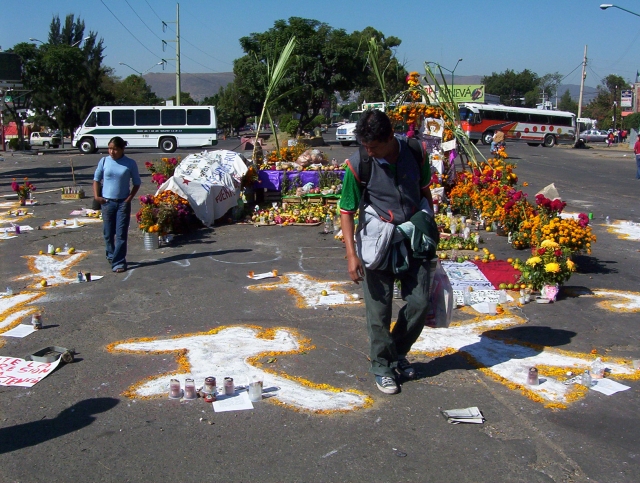 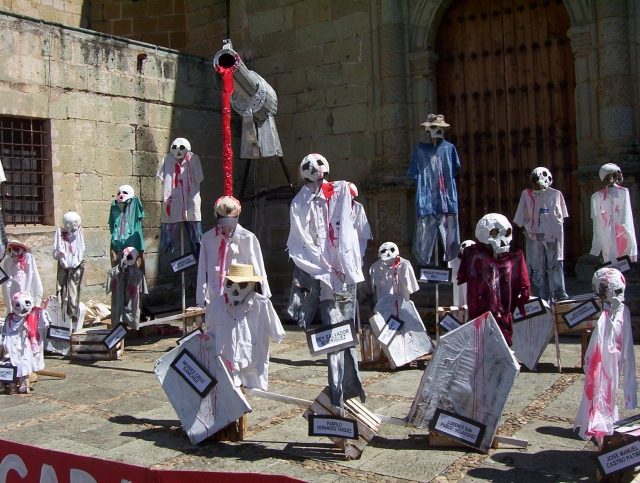 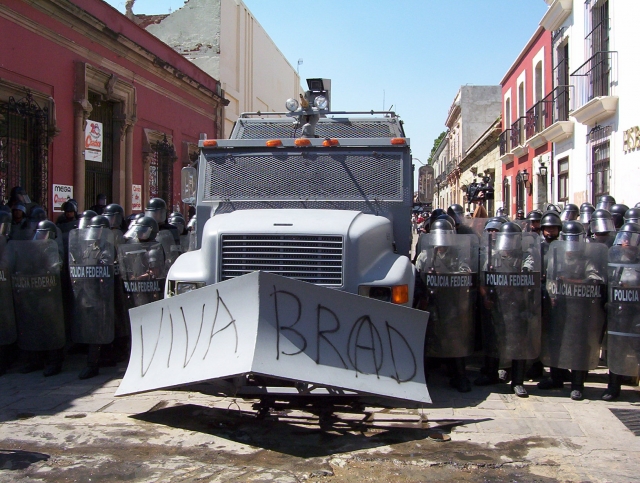 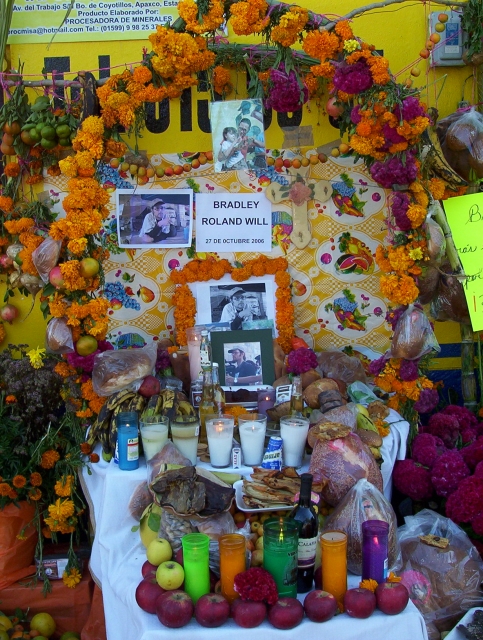 original image (1232x1632)
Alter set up by neighbors and others to remember Brad. It was set up behind the barricade, rather than where Brad was shot, to be safer.
§Brad's alter in Santa Lucia/Calicanto
by tristan Tuesday Feb 27th, 2007 10:34 AM 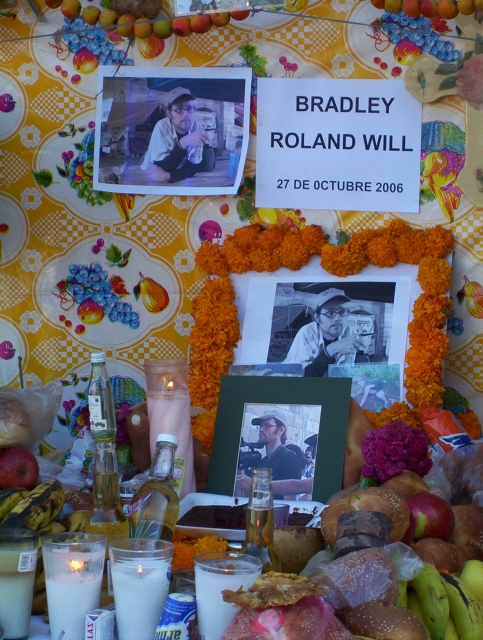 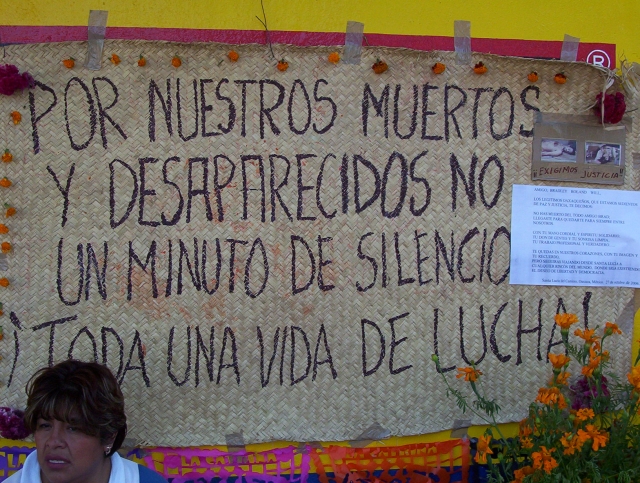 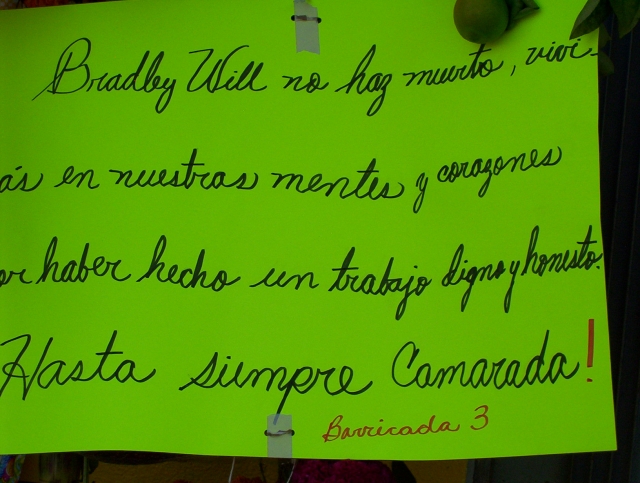 original image (1632x1232)
"Brad Will is not dead, he lives in our minds and hearts for doing a dignified and honest job-Until always companion, Barricade 3"
§Barricade Brad
by tristan Tuesday Feb 27th, 2007 10:34 AM 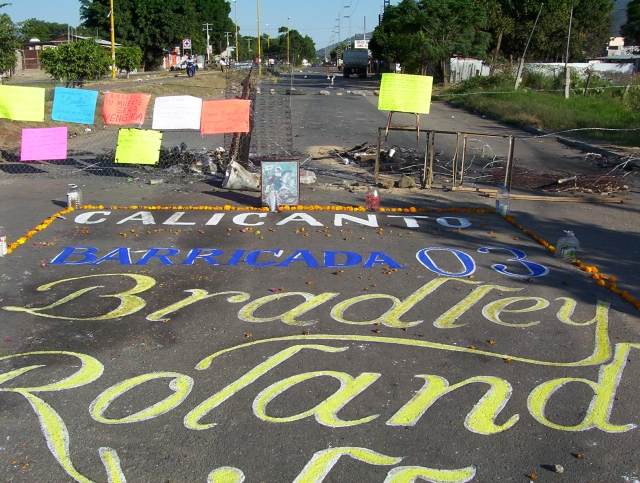 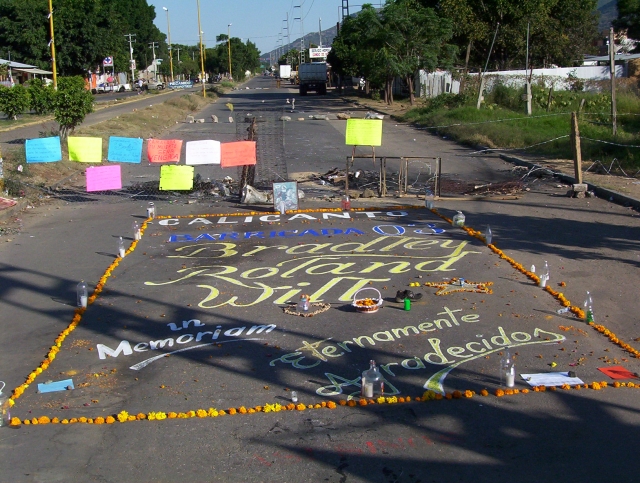 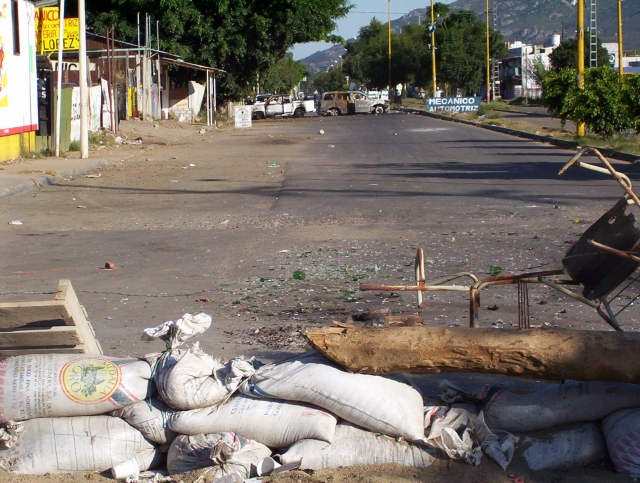 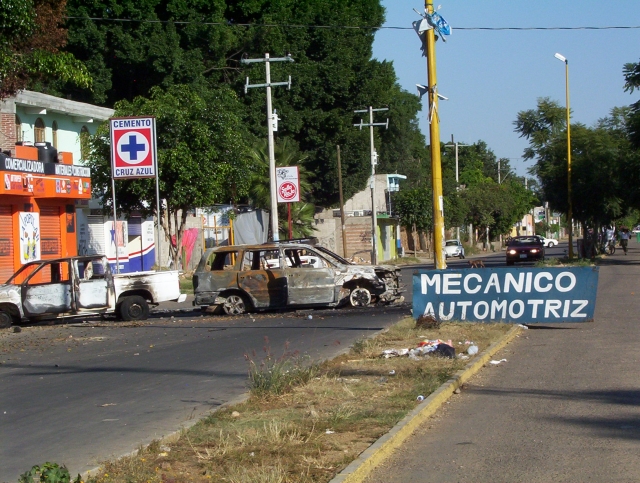 original image (1632x1232)
Brad always tried to get beyond the choices or false dichotomies of capitalism.
Add Your Comments
Support Independent Media
We are 100% volunteer and depend on your participation to sustain our efforts!