The Other Hollywood Oscar Ceremony - The

by Peter Graves-Goodman (indymediamiami [at] yahoo.com )
At the corner of Hollywood and Vine, just blocks away from where the Hollywood Oscars were to be presented at the Kodak Theater, the "Military Families Speak Out" organization hosted an “Oscar for Peace” awards ceremony and "Bring Our Troops Home Now" peace vigil. "Military Families Speak Out" honored individuals “for their exceptional and tireless commitment to waging peace, rather than war.” The event drew thousands, and featured an 8-foot “Oscar” in military camouflage with the inscription “Bring Me Home!” The "Code Pink Police," members of the antiwar group, Code Pink Women For Peace, arrested a mock President Bush, while the "Billionaires for Bush" comedy troupe conducted a mock counter-protest. 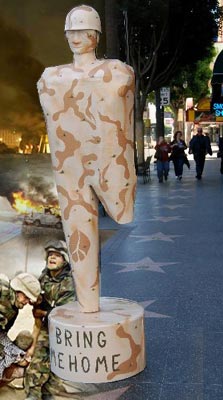 While the afternoon “Oscar for Peace” awards ceremony and the peace vigil (which included the reading of the names of the U.S. soldiers who have died in the illegal war in Iraq) were taking place at Hollywood & Vine, the other Oscar Awards attendees from the Academy of Motion Picture Arts and Sciences (AMPAS) were arriving early for their red carpet interviews several blocks away and were greeted with an aerial banner flying overhead that read “Bring Our Troops Home Now”.

Democracy for America Miami (DFAM) and Miami Veterans for Peace came up with this novel approach to broadcasting the message to end the occupation of Iraq after organizing two aerial banner flights this year at the Super Bowl in Miami and again at the Grammy Music Awards, that resulted in inclement weather grounding the aerial banner flights.

Here is the text of the "Oscar for Peace" presentation to Dennis Kucinich, Ohio Congressman and Democratic Presidential Candidate:

"We come here today to honor an individual who mirrors those ideals held near to thousands of military families...MILITARY FAMILIES...who worry about their sons, their daughters, their husbands, their wives, their sisters and brothers, their mothers and fathers, their aunts and uncles, their cousins, their grandmothers and grandfathers, their granddaughters and grandson....who are stationed in Iraq...IRAQ!!! Where over 3,100 United States soldiers have died! IRAQ!!!!...Where over 655,000 Iraqi civilians have died....and FOR WHAT??? WHY???

These military families are speaking out. They ask, "WHEN WILL THIS INSANE WAR END??? Why are our cries being ignored? Why has CONGRESS turned a deaf ear to OUR plight? Why isn't the American public listening to our PLEA?"

"OUR PLEA! TAKE CARE OF OUR TROOPS, OUR FAMILY MEMBERS, WHEN THEY GET HOME!...to NOT cut funding of Veteran's benefits, but to take care of Veterans...OUR FAMILY MEMBERS...who are returning from this ILLEGAL WAR with both physical and mental disabilities!!!!!"

....And for this, Congressman Kucinich, we thank you!

...Congressman Dennis Kucinich, on behalf of Military Families Speak out, and as a Citizen for World Peace, it is an honor to present to you this award....CHAMPION FOR PEACE...for all that you do in the name of PEACE....Congratulations!
§DFAM aerial banner
by Peter Graves-Goodman 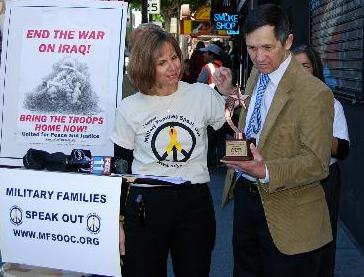 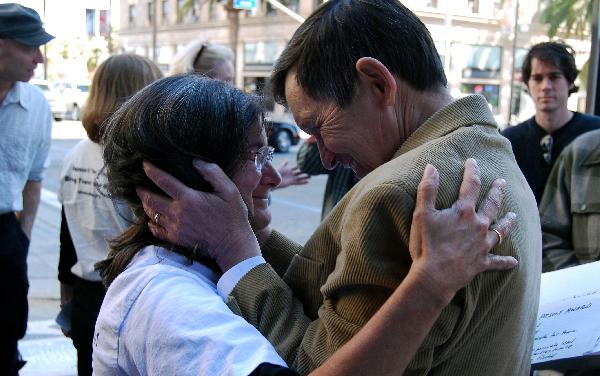 Dennis Kucinich comforts Pat Alviso who has a son in Iraq.
Add Your Comments
Latest Comments
Listed below are the latest comments about this post.
These comments are submitted anonymously by website visitors.
TITLE
AUTHOR
DATE
The military knows
Nadia
Support Independent Media
We are 100% volunteer and depend on your participation to sustain our efforts!