Newswire
Calendar
Features
Home
Donate
From the Open-Publishing Calendar
From the Open-Publishing Newswire
Indybay Feature
Publish to Newswire
Add an Event
Related Categories: East Bay | Immigrant Rights
Gestapo Immigration Raids in the Bay Area
by Revolution Newspaper (revolution.sfbureau [at] gmail.com)
Sunday Feb 25th, 2007 12:44 PM
Over the last two months immigrants throughout the San Francisco Bay Area have been targeted in vicious raids. Hundreds have been arrested and deported as part of a nationwide effort by ICE (Immigration and Customs Enforcement) known as “Operation Return to Sender.” The recent raids began in January in the cities of Richmond, San Pablo and Concord, in poor neighborhoods with large Latino populations and have spread to other areas. 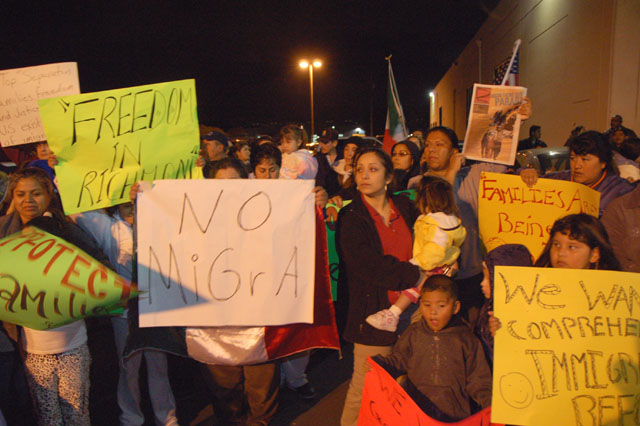 “To those criminal aliens who have eluded apprehension in the past, be forewarned: ICE agents will seek you out, apprehend you and remove you from the United States.”
-- Michael Garcia, assistant secretary from a National Fugitive Operations Program fact sheet.

“We are experiencing a Nazi Gestapo action on our community. I feel that very strongly in my heart.”
-- Rev. Filiberto Barrera of Richmond's St. Cornelius Church

Over the last two months immigrants throughout the San Francisco Bay Area have been targeted in vicious raids. Hundreds have been arrested and deported as part of a nationwide effort by ICE (Immigration and Customs Enforcement) known as “Operation Return to Sender.” The recent raids began in January in the cities of Richmond, San Pablo and Concord, in poor neighborhoods with large Latino populations and have spread to other areas.

People have told of agents going to a Home Depot lot where day laborers wait for work, to supermarkets, street corners, houses and apartments, and BART (rapid transit) stations, armed with weapons, grabbing anyone without an ID. Some immigrants have been taken to unknown detention centers, some out of state.

Rev. Ramiro Flores said, “These agents come to people’s doors pretending to be police, they break their windows and scare them. When agents can’t find who they’re looking for they’ll just take another individual without papers.” (SF Chronicle January 29, 2007)

ICE agents went into neighborhoods around Meadow Homes Elementary School in Concord. Children were traumatized after seeing armed agents dragging people away and were afraid their parents wouldn’t be there to pick them up after school. The principal reported that the day after large raids in Concord, 106 children were absent.

The raids have cruelly broken apart families. Women are carted away leaving young children to be taken care of by friends or neighbors. Sometimes a family member will disappear for days without being able to call family, friends or attorneys.

Fernando, a young boy, about 10-years old testified at a City Council meeting in Richmond: “My cousin’s mom was making breakfast for my two cousins. When she went to her refrigerator she had no milk. When she left the house to go get milk the immigration came and took her away. My cousin’s dad was lucky because he escaped. My cousins were sad and my cousin’s sister was crying because who is going to take care of her?”

A climate of fear has been created throughout the Latino community. Busy 23rd Street in Richmond, usually filled with shoppers in the Latino markets, record stores, beauty shops, panaderias (bakeries), carnicerias, (butcher shops) have been empty. A small businessman said he lost 60% of his business in four weeks and the street was turned into a “desert.”

On January 28, 2007, in protest of these raids, a 1,000 people filled a church gym at a community meeting called by the Contra Costa Interfaith Supporting Community Organization at St. Mark’s Church in Richmond. Although some feared that ICE would arrest people who came to the meeting, immigrants came out with their families and some publicly spoke out against the raids. The Mayor of Richmond, City Council members, school officials, teachers, and attorneys voiced their support for the immigrants and called for a stop to these raids. Similar meetings drew hundreds in Concord, Redwood City, and Santa Cruz.

Then on February 6, 300 people, mainly immigrant families with children, but also Latino students and community organizers, religious people and others, gathered to at a meeting of the Richmond City Council to protest the raids.

Copies of the Revolution Special Issue opposing Bush’s escalation of the war in Iraq with the headline “¡Esto tiene que PARAR! (This Must Halt!) were passed out broadly and many people held them up along with other signs against the raids.

Revolution spoke with Jose, an older Catholic priest from Richmond, who was looking at the back of the newspaper with the poster: “Wanted for Mass Murder: The Bush Regime” and laughing. He was upset at the way these immigration raids are being justified as part of a war on terror. “We say that George Bush is the number one terrorist. Most of the terrorist schools, preparing people for terrorism are here, like the School of the Americas [description],” Jose said.

“The U.S. says ‘with justice for all,’” Jose continued. “I think there’s not justice because these people are being hit, without doing anything wrong…because they don’t have documents. I think it is very unjust. They are very rough, they come into people’s houses, using very bad language – they say ‘open the F??? door.’ Putting their weapons in people’s faces.”

One ESL teacher asked, “What kind of country is this becoming?” She had been talking to her students about the Constitution and the Bill of Rights, and went down the list of the Bill of Rights and most of the students felt these rights still do not exist.

Twenty-nine ESL teachers signed a statement denouncing the raids that was published in the San Francisco Chronicle. The letter stated: “Even before these recent raids, our students shared stories of being separated from their children growing up with grandparents in their native countries, of people who have had their parents get sick or who die and they are unable to go back to visit or to their funerals, and many more. We have heard of people who worked for $2.00 a day in Mexico and felt they had no choice but to come here to survive. We have heard of people working in an avocado processing plant in Mexico, where the avocados were sorted out, only to be sent here for U.S. consumption. They come here to work and to support their families, sometimes working two jobs. They are human beings, not criminals. We say: Stop the raids, arrests and deportations!”

A significant element of the protests has been that a number of Black activists have spoken out against the raids. Leonard McNeal of Black Alliance for Just Immigration, and a member of the San Pablo City Council denounced the roundups. Barbara Bechnel, an author, journalist, and film producer who was a close friend of and advocate for Stanley “Tookie” Williams, the prisoner and former gang leader who became an advocate for a gang truce and was executed in 2005, said, “As a Black woman I will stand shoulder to shoulder with my Brown brothers and sisters. I do so because what I have heard here, what I have seen, what I know – this is discriminatory and unjust behavior. As a Black woman – I will be 57 years old in May – I have experienced unjust and discriminatory behavior. I don’t wish that on my Brown brothers and sisters, and I will stand with them, shoulder to shoulder, until this ends.”

A Nazi-like climate against immigrants is being created in this country. And there are those who welcome and seek to justify these ugly attacks. The Mayor of San Pablo, implying that people are lying, said, “I’m not saying they were made up. I’m just saying that they could have been.” And Vice Mayor Sharon Brown came right out and said that the statements by immigrants and their supporters are “outrageous lies and fabrications.” In an action equivalent to a cross burning, the racist anti-immigrant Minuteman group held a rally in the heart of the Latino community in Redwood City in support of the raids and in defense of two Border Patrol agents who are facing charges for killing an immigrant.

Every person needs to ask themselves: Can I stand by while my government is terrorizing immigrant communities, while children are afraid to go to school, and parents are afraid to step outside? Can I stand by while families are being broken up, while our immigrant brothers and sisters, who have come to this country to work and survive are deported, while hundred of immigrants die every year in the deserts of the Southwest. This is like rounding up fugitive slaves, or putting Jews on the trains to the camps in Germany. This situation is immoral, unjust and intolerable. It cannot be allowed to continue.

It is up to the masses people themselves to stand up to these attacks. We cannot rely on the Democrats to stand up for the rights of immigrants. Look at the stand of the leading Democrats. Hillary Clinton has called for a national ID card, a proposal aimed at targeting immigrants. And in a 2004 interview on WABC radio, she said: "I am, you know, adamantly against illegal immigrants." Barack Obama voted for funds to construct the border fence and was a co-sponsor of the 2006 Senate immigration bill, containing a lot of anti-immigrant provisions, including making English the official language.
We cannot accept, we cannot live, with a situation where millions of immigrants are hounded and hunted down like criminals. Unless we resist and mobilize others in mass, determined action to put a STOP to these Gestapo-like raids, then we will bear the responsibility for the perpetuation of the these very crimes. By standing up we create the possibility of a different future than one where millions are driven from their homes by the workings of a cruel imperialist system, forced into dangerous border crossings, made to work in the most dangerous and difficult jobs, hounded at every turn and forced to live in the shadows.