by Mike Rhodes (MikeRhodes [at] Comcast.net)
The Homelessness Marathon put a spotlight on Fresno and the way this city treats its homeless residents. The story that follows is about a one hour panel that was held during the event. The Homelessness Marathon was 14 hours long. The photo below is from the first panel, which included Cynthia Greene, Joanna Garcia, Pamela Kincaid, Jeremy Alderson, and Alphonso Williams. Jeremy Alderson is the host and producer of the Homelessness Marathon. The guests are all a part of a lawsuit against the City of Fresno demanding that city workers stop taking and immediately destroying homeless peoples property. A preliminary injunction has been issued. A date for the lawsuit to be heard in federal court is expected to be announced soon. 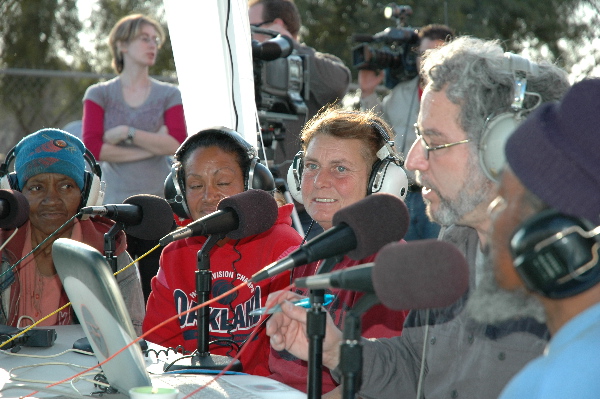 Homeless people and their allies came together in Fresno on February 20 and held elected officials accountable for the recent attacks against unhoused people in this community. The Homelessness Marathon, a broadcast that goes to over 100 radio stations throughout the country, was the scene for this poor people’s assembly in downtown Fresno. The 14 hour program included a panel with Fresno mayor Alan Autry, two city council members, and Board of Supervisors president Bob Waterston. The event resembled a town hall meeting with an open mike where anyone could ask questions of city and county elected officials.

There were those in the crowd who described recent city action against the homeless as a scorched earth policy. That policy has included bulldozing homeless encampments, passing draconian ordinances to prevent homeless people from moving their possessions in shopping carts, an outdoor drunk tank for homeless people, and the frequent violation of their civil rights by the police. It was so bad, that a federal judge had to order the City of Fresno to uphold the U.S. constitution. A lawsuit against the city is pending.

Rebeca Rangel, speaking on the open mike, demanded to know why the City of Fresno took Community Development Block Grant (CDBG) money that was intended for the homeless and gave it to the Fresno Police Department (FPD). Rangel said the city has received $8 million to address affordable housing issues and that most of that money has not reached the homeless or the poor in this community. Homeless advocates say that the CDBG money should have gone to help the homeless but was instead given to FPD’s code enforcement division. In a bitter irony, it was an officer in code enforcement that developed the policy which resulted in the taking and immediate destruction of homeless peoples property. United States District Judge Oliver Wanger, citing the 4th, 5th, and 14th amendment to the constitution, issued a preliminary injunction against the city’s attack on the homeless. Wanger said “people can not be punished because of their circumstances. They can’t be deprived of their constitutional rights.” The mayor and others on the panel defended their use of the money by saying that CDBG money can be used for many different things.

Over 100 homeless people and their allies attended this event, held on the lawn at the Mexican American Baptist Church in downtown Fresno. As people spoke, a video showing the destruction of homeless encampments by city workers, played continuously on a wall directly in front of the elected officials. Angry shouts from the crowd like “time to resign mayor” could be heard as the panel continued.

Jeremy Alderson, the producer of the Homelessness Marathon, asked the mayor if he would put trash bins and portable toilets up at the homeless encampments. Autry did not address the question, so Alderson demanded a yes or no answer. Autry said he did not want to condone illegal behavior and therefore would not support placing these facilities near homeless encampments. Fresno City council member Cynthia Sterling, whose district includes many homeless encampments, said “I’m willing to look to find a solution, but . . . people do sleep inside the porta potties . . .” Sterling went on to say she was willing to consider the possibility of providing homeless people with basic services. Council member Jerry Duncan unambiguously said that he would support putting trash bins and portable toilets near encampments for the homeless people to use.

On the Friday before the Homelessness Marathon the City of Fresno did an about face on their policy of trash collection at homeless encampments. At the encampment located just South of Ventura on H street the City of Fresno came with a garbage truck, bulldozer, and crew of sanitation workers. Instead of bulldozing the tents in the encampment, city workers carefully cleaned up an area where trash had collected. City of Fresno Public Information Officer Rhonda Jorn said the city was working with the homeless to clean up the area. No homeless peoples property was destroyed in the sweep, proving that the city can clean up these areas without massive destruction of homeless people’s property.

Before the broadcast I thanked the mayor for the changed policy and asked him about installing portable toilets and trash bins near the homeless encampments. Autry did not say no. In fact, he directed his Deputy Chief of Staff Kyle Loreto, to meet with me on this issue and work out the details.

The Homelessness Marathon was a great opportunity for the community to hold elected officials feet to the fire on this issue. With the threat of a lawsuit hanging over the City of Fresno, national exposure on the city’s treatment of the homeless, and a change of policy in the way clean ups are conducted starting to take shape, now might be the time when poor and homeless people start to be treated with the dignity and respect they deserve.

Mike Rhodes is editor of the Community Alliance newspaper. He can be contacted by email at MikeRhodes [at] Comcast.net
END_OF_DOCUMENT_TOKEN_TO_BE_REPLACED
§Rural Homelessness
by Mike Rhodes 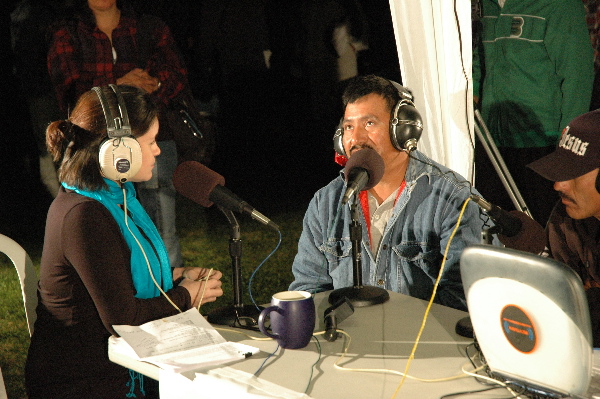 A panel of immigrant farm workers from California’s San Joaquin Valley was featured in the third hour.
§Fresno’s Homeless Talk Back to City Officials
by Mike Rhodes 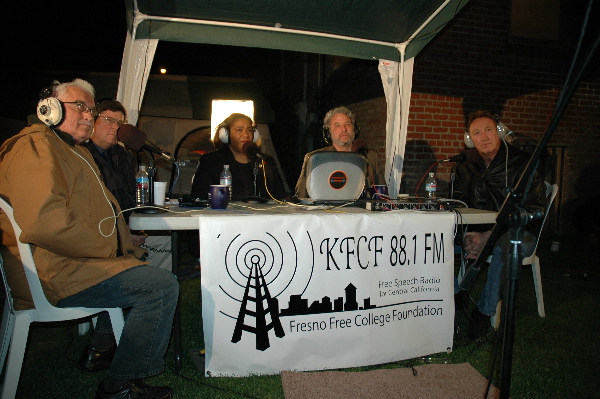 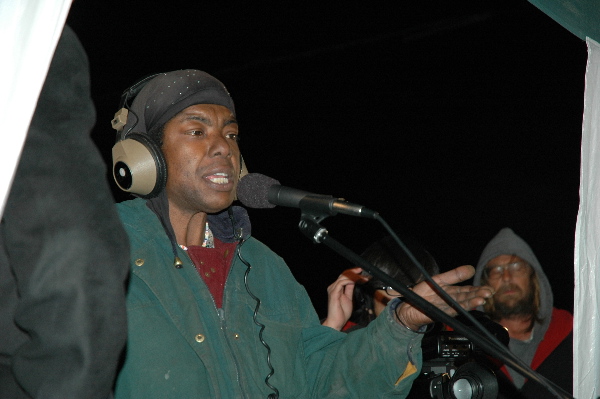 Speakers from the audience had an open mike and took the opportunity to ask elected officials anything that was on their mind.
§Rebeca Rangel
by Mike Rhodes 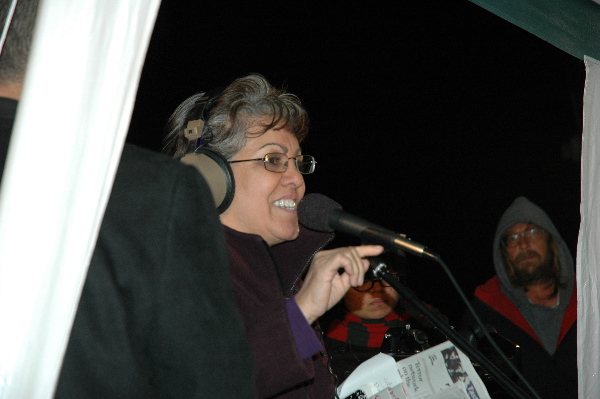 Rebeca Rangel held elected officials feet to the fire on the issue of Community Development Block Grant money. She wanted to know why this money was not helping the homeless.
§Alderson and Autry
by Mike Rhodes 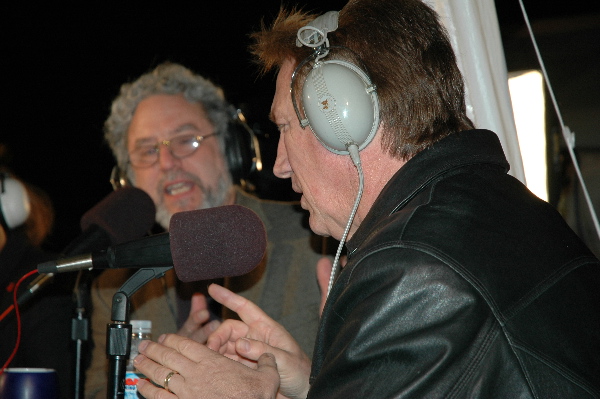 Jeremy Alderson, the producer of the Homelessness Marathon, asked the mayor if he would put trash bins and portable toilets up at the homeless encampments. Autry did not address the question, so Alderson demanded a yes or no answer. 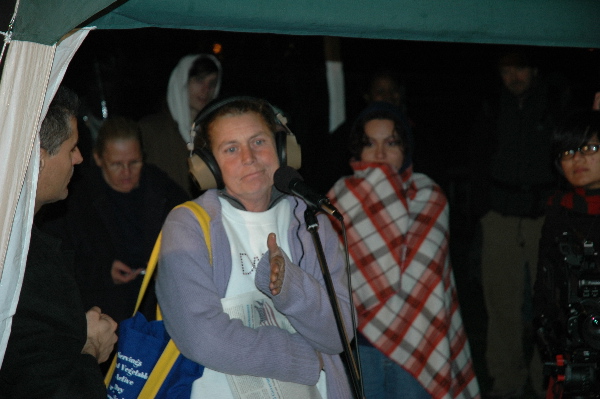 Pamela Kincaid asks a question from the open mike.
§Panel on Tent Cities and other Homeless Communities
by Mike Rhodes 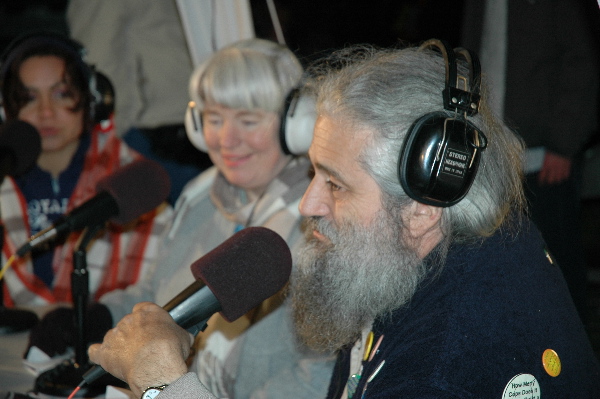 Add Your Comments
Comments (Hide Comments)
§Great show
by Ann G from MN
I thought this show was great. I was only able to stream it in for a couple hours but it was when the Mayor and City Council people were on. It is so sad that people like them are the ones elected. I hope more people in the community step out and run for office.

* After reading this article I hoped to read at the end what has come of the Community Developement Block Grant Money that was for the homeless.. and what was done to the city for giving it to the PD. The get money from Homeland Security, from money that is suppose to go to Recreation.. and I sure there is more.
But isn't the misuse of grant money illegal ? Does the Attorney General know ? and can he do something about it? 8 million is a lot of money. The Mayor and his staff can say a lot of things but doesn't make it right. I hope those homeless who were abused by the city continue to sue it and I hope some of their winnings are put into a pot to help other homeless.
Add a Comment
Support Independent Media
We are 100% volunteer and depend on your participation to sustain our efforts!