The Mayor, the Broadcast and the Truth

by Nobody
The Homelessness Marathon comes to Fresno 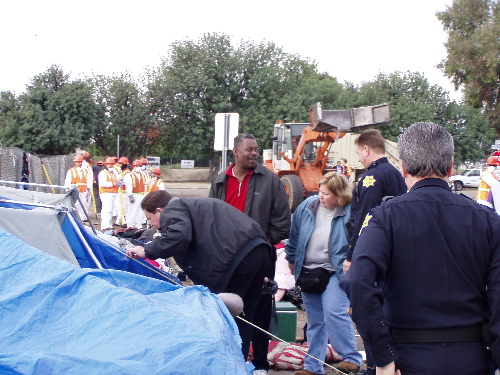 The Tenth Annual Homelessness Marathon will originate from Fresno, California starting at 4 p.m., PST, on Tuesday, February 20th and ending at 6 a.m., PST, Wednesday, 2/21/07. The Homelessness Marathon is the world's leading radio broadcast focusing on homelessness and poverty. The 9th Marathon, which originated from Atlanta, was on more than 110 stations coast-to-coast, while another 30 or so stations across Canada carried a parallel Canadian Homelessness Marathon. "We picked Fresno," explains the Homelessness Marathon's director, Jeremy Weir Alderson, "partly because of the extraordinary cruelty with which homeless people are being treated there." Allegedly, in the course of making sweeps, the City of Fresno has thrown away the meager possessions of homeless people, including their IDs, money, sleeping bags and tents as well as a list of items Alderson calls "particularly shocking," including someone's false teeth, a cane, a wheelchair, the ashes of someone's dead grandchild and a tent thought to have kittens inside (the kittens were never seen again). In response to a lawsuit filed by a group of volunteer lawyers, including the ACLU and the Lawyers Committee for Civil Rights, U.S.

District Judge Oliver W. Wanger issued a preliminary injunction ordering the City of Fresno to stop throwing away the possessions of its homeless citizens. In his decision, Judge Wanger characterized the City's arguments as "disingenuous" and "dishonest." Fresno's mayor, Alan Autry, responded by calling Wanger's ruling "cavalier" and "veracity challenged," suggesting that the judge, "enter the real world and find out the real truth." He didn't stop there.

In a radio appearance, Autry insisted that one homeless encampment had to be cleaned up because kids in the neighborhood were "watching [homeless] people have sex," and because the encampment was "a disease factory." "This mattress that the judge says we should have gave back was riddled with everything from e. coli to hepatitis... something that it would take a hazmat suit to give back to that person." But Mike Rhodes, editor of Fresno's Community Alliance newspaper and the only reporter to attend the entire court hearing, points out that
"the evidence at the hearing was clear - the City of Fresno was violating the constitutional rights of the homeless. They were taking the property of homeless people and immediately destroying it. There were no bizarre allegations, like the mayor made, about sex in the street or mattresses with e. coli and hepatitis at the hearing. These continuing lies and attacks on the homeless are just more evidence that this city has a long way to go in understanding how to treat the homeless with dignity and respect.”

Additionally, the city has based it's estimate of how many homeless people are in the area partly on a statistic attributed to HUD. But HUD disavows the statistic completely, and no one associated with the city will explain where it really came from. Fresno's mayor, police chief and city manager were the first people invited to be guests on the 10th Homelessness Marathon (but so far they have not responded). The broadcast will be available free to stations over the NPR satellite, the Pacifica satellite and a webcast. It will be hosted by local community radio station KFCF and an ad hoc committee of activists on poverty and housing issues. "Mayor Autry says he wants the truth to come out," says Alderson, "and we're going to help him with that, but unlike the mayor, we're going to see to it that the homeless people of Fresno -- and across the country
-- get their say too."

END_OF_DOCUMENT_TOKEN_TO_BE_REPLACED
Add Your Comments
Support Independent Media
We are 100% volunteer and depend on your participation to sustain our efforts!