Add an Event
Newswire
Calendar
Features
Home
Donate
From the Open-Publishing Calendar
From the Open-Publishing Newswire
Indybay Feature
Publish to Newswire
Add an Event
Related Categories: San Francisco | Media Activism & Independent Media
Josh Wolf Speaks on Serving Longest Ever Incarceration for Protecting Sources
by reZz (rezrezrez [at] fastmail.fm)
Tuesday Feb 6th, 2007 7:55 PM
After 169 days in prison, Josh Wolf today earned the dubious distinction for incarceration intended to force him to make public videotape of a 2005 anarchist demonstration. Wolf maintains that as a journalist, it is his right to protect his sources from the government. The courts are hoping that after enough time in jail, the journalist will surrender the tapes. 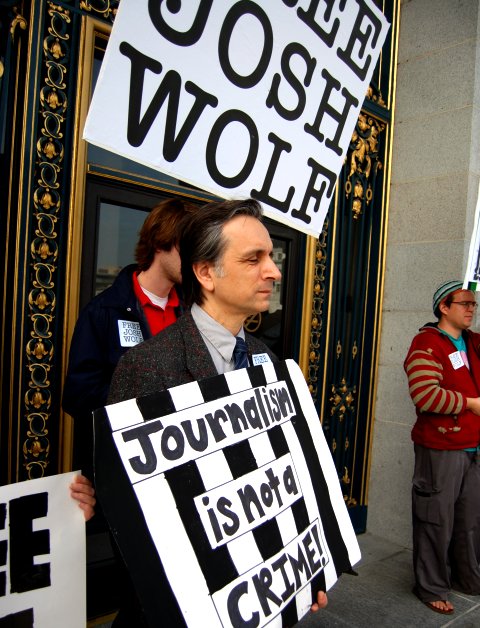 “Free press in a democracy can not be an extention of the (judicial) system. This case is not about a videotape, it is about eroding the rights of journalists ... in what has become nothing more than an anarchist witch hunt. The media is under attack....wtihout a free press, we cannot [as a society] be free.”

“The free press can not be an extension of the judicial system,” said Josh Wolf from prison today as he earned the dubious distinction of serving the longest sentence ever served by a journalist in the USA for contempt of court for protecting his sources. The issue allegedly revolves around a piece of foam bedding that was lit under a police car at an anarchist demonstration in 2005. The foam did not burn, but the federal government took over the case, it claims, because the car in question was partially paid for by federal funds.

“Free press in a democracy can not be an extention of the judicial system,” said Wolf in a statement read today at a protest and press conference at the steps of the San Francisco Capitol building. “This case is not about a videotape, it is about eroding the rights of journalists ... in what has become nothing more than an anarchist witch hunt. The media is under attack....without a free press, we cannot [as a society] be free.”

Today is Wolf’s 169th day of incarceration. Media activists and professional journalists, including representatives from Reporters Without Borders, the Media Alliance, Society of Professional Journalists, and the SF Bay Guardian came out to support Wolf, whom the court, as well as many mainstream and left wing media outlets alike have been distancing themselves from, calling him a “blogger” rather than a journalist. Wolf did sell his stories, but insists that his rights as a journalist stem from his commitment to reporting the truth, not his ability to claim to be a media professional.

“As friends and colleauges, we all need to step forward to support Josh Wolf,” Said Kevin Epps, who in 2002 made waves with his film “Strait Outta Hunters Point.” “This is important for people who believe in free speech.” Epps produced a video about Wolf’s incarceration and struggle to maintian his right to free speech in the face of judicial coercion.

“I look forward to coming home to San Francisco,” says Wolf, “when the government comes to its senses and realize that I can not, will not be coerced.” 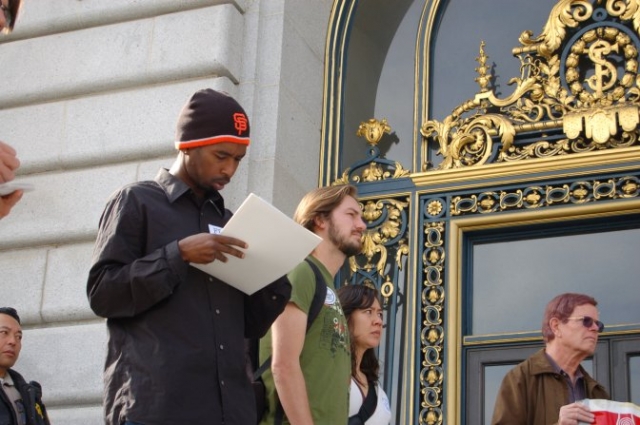 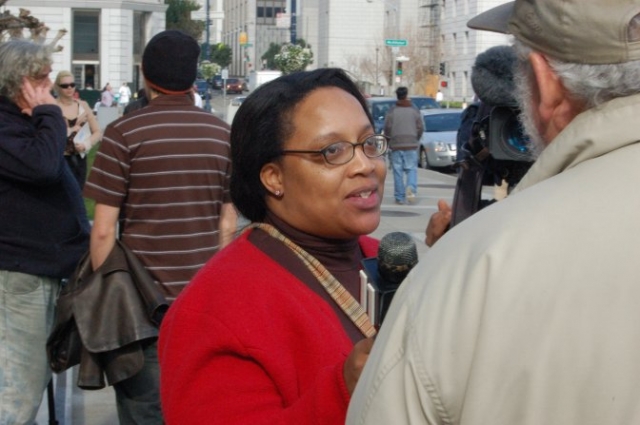 original image (672x447)
This reporter from NBC showed her support for independent media by kicking over and smashing my portable cassette recorder while I was regestering for this event.
Add Your Comments
Support Independent Media
We are 100% volunteer and depend on your participation to sustain our efforts!