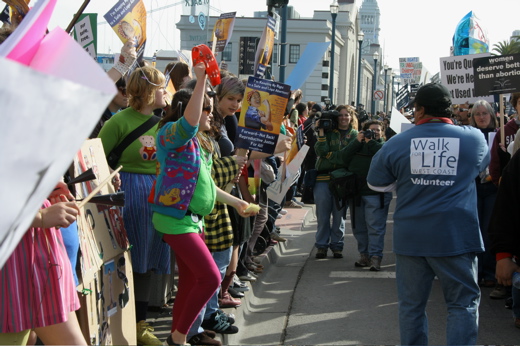 It has become apparent that anti-abortionists are largely affiliated with churches or religious organizations, and the Federal Constitution has a specific clause that says there must be a separation of church and state. So it seems that someone is not obeying Federal Law, which could open doors in the fight against abortion opponents, and maybe stop the onslaught of religious extremism, BUT.......
http://homepage.mac.com/trannytalk/Menu1.html
§SFPD eager to push people behind barriers
by a TG person Sunday Jan 21st, 2007 11:20 AM 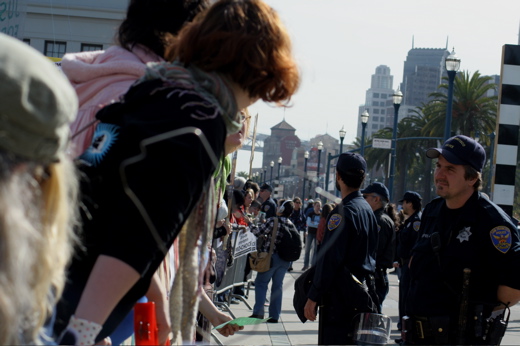 Freedom to Assemble does not mention barriers or fences.
§Use condoms
by a TG person Sunday Jan 21st, 2007 11:20 AM 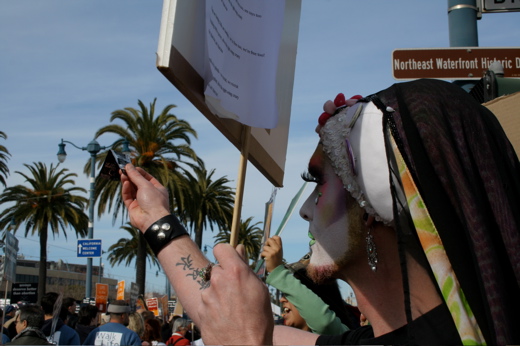 Using condoms can prevent the need for an abortion. Does the Catholic church promote the use of condoms? NOOOO.
They promote: Don't have sex until your ready for a kid, which is not only impractical it is downright ridiculous.
§Ridiculous symbolism
by a TG person Sunday Jan 21st, 2007 11:20 AM 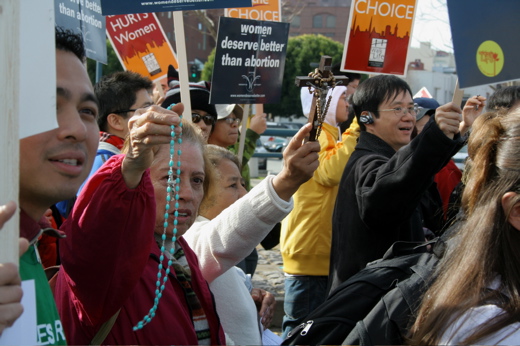 In some partsAmerica the use of riduculous symbolism is an invitation for tauntings and hate.
§Proud and Loud
by a TG person Sunday Jan 21st, 2007 11:20 AM 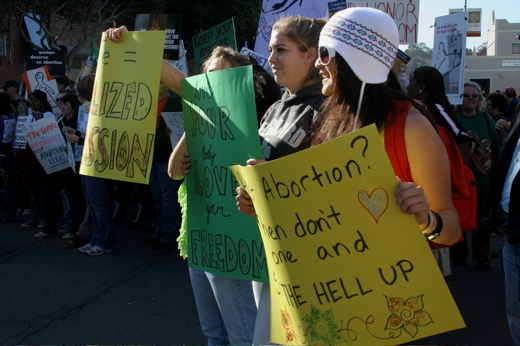 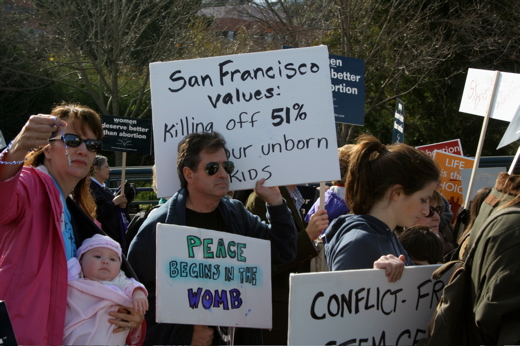 It's obvious this man came with his own agenda. He just doesn't like San Francisco. I bet he doesn't even care about abortion...
§Political party aligning themselves...
by a TG person Sunday Jan 21st, 2007 11:20 AM 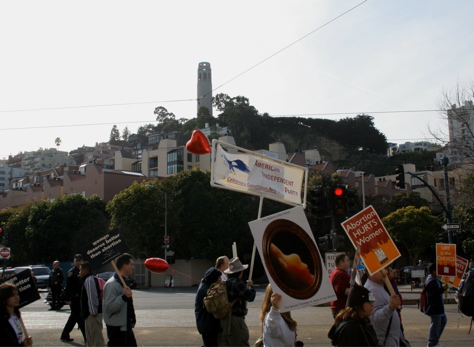 Does this mean that the American Independant Party has aligned themselves with the religious right. Once again Separation of church and state comes to play. So it is my conclusion this also means that they have become an illegitimate political party. Please take them off the voter application form.
§Geez oh flip.
by a TG person Sunday Jan 21st, 2007 11:20 AM 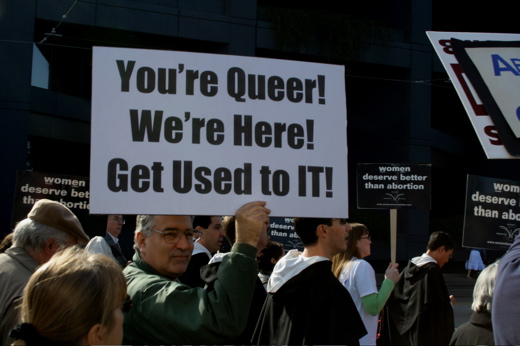 Get real. Queers are now joining the ranks of religious extremists? The man holding this sign is probably a phoney MF.
§Huge signs.
by a TG person Sunday Jan 21st, 2007 11:20 AM 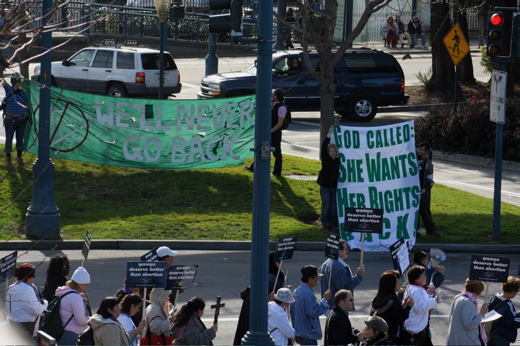 Those signs made more of an impression with the tourists than the number of religious extremists attending the Walk for Life.
§Chanting them to the end.
by a TG person Sunday Jan 21st, 2007 11:20 AM 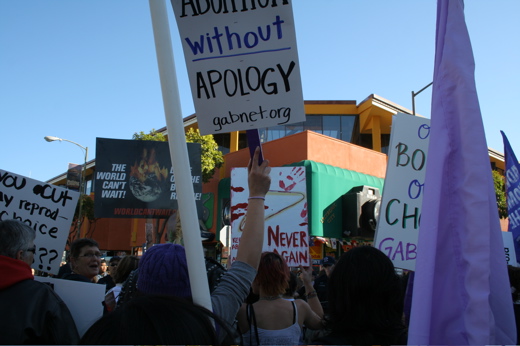 The counter-protesters made way more noise than the religious extremists.
Add Your Comments

§Pro life anti war
by Me
Sunday Jan 21st, 2007 9:54 PM
The constitution also has something to say about freedom of religion. So what if religion influences someone's values. All opinions are influenced by some sort of belief system. Secular does not mean that religious groups can't speak out against injustice. Where were your complaints when the Poe spoke out against the Iraq war? The church also opposed the invasion of Iraq.
Add a Comment
§injustice?
by what about...
Sunday Jan 21st, 2007 10:19 PM
Injustice against women of color and women living in poverty? Rich white women will always be able to get an abortion if they want one.
Add a Comment
§Do you support the right to abort female babies?
by Me
Tuesday Jan 23rd, 2007 12:19 AM
Black and poor babies should not be aborted because of injustice in society. No life be it black, white or of rich or poor parents should be killed. This is the ultimate form of discrimination. Where does the pro abortion lobby stand on aborting female and disabled babies?
Add a Comment
§get them sex ed and contraceptives
by but no!
Tuesday Jan 23rd, 2007 12:39 PM
The right wing is even opposed things that will prevent unintended pregnancies in the first place!
Contra-Contraception:
http://query.nytimes.com/gst/fullpage.html?sec=health&res=9407E2DC113FF934A35756C0A9609C8B63
Add a Comment
§sex= baby; NO sex= NOTpregnant
by prolifegirl
Wednesday Feb 28th, 2007 8:30 PM
How can NOT having sex be impractical??? If you ain't doin it you ain't gonna get pregnant or std's! don't sleep around unless you are willing to take the consequences of your actions.
prolifegirl
Add a Comment
§to Prolifegirl
by prochoice
Thursday May 31st, 2007 3:56 PM
Keep your judgementalism to yourself. You don't tell others how to live their lives. Mind your own business. If you don't like sex, don't have it. The rest of us are normal healthy sexually active beings. Deal with it.
Add a Comment
§pro life
by prolife chica
Thursday Jan 17th, 2008 9:36 PM
I totallly agree, unless your ready for the responsiblities that come with having sex, then dont have it. By not havin sex youre avoidin so many issues including abortions!
Add a Comment
§But if you do have sex, please use a condom
by luci
Thursday Jan 17th, 2008 10:36 PM
If you do have sex, please use a condom and water-based lubricant. That will protect you from a lot (but not all) of sexually-transmitted infections.
Add a Comment
§Good job Walk 4 Lifers'
by prolife chica
Saturday Jan 26th, 2008 9:39 PM
I went to the 2008 Walk 4 Life n it was so awesome 30,000 peoples showed up and we marched for life. It was sooo awesome and i'll totally do it again next year. if you didnt do it this year, do it next. GO WALK 4 LIFERS'
Add a Comment
§and in the meantime...
by luci
Saturday Jan 26th, 2008 10:17 PM
(at least for the time being) in-between now and next year's walk for life, you still have the right to get an abortion if you happen to get pregnant and want to discontinue the pregnancy. congratulations, and please don't fuck with our right to choose, because it's yours, too. see you in the streets next year.
Add a Comment
Support Independent Media
We are 100% volunteer and depend on your participation to sustain our efforts!