Dear friends in the UC Santa Cruz community,
Students Against War is greatly saddened by the decision of the Administration to cancel the Career Fair previously scheduled for January 31st, 2007. As students ourselves we fully understand the need to find employment. We recognize the loss of the Career Fair is a loss of opportunity for UCSC students. This loss is compounded by the short notice of this cancellation and the infrequency that job fairs are held on this campus. UC Berkeley, for example, has 8 career fairs scheduled (including a fair with the title “Nonprofit/Public Service Career Fair”) for its Spring Semester as opposed to UC Santa Cruz’s 1 per Quarter. This averages out to about 1 Career Fair a month, providing constant, easy access to employment opportunities for UC Berkeley students.

Toward the goal of supporting students in their search for jobs, members of Students Against War had been working to create an alternative career fair with employers who are community-based, provide positive services, and produce technology for the good of all. This career fair had been titled Ethical Career Opportunities (ECO) and would have been a first for UCSC. We, as students, were looking forward to seeing employers that we could speak to and work for in good conscience, however, administrators forced the cancellation of this event through numerous irresponsible actions, including removing the group’s website and refusing to allow the event to happen without military recruiters. See ECO’s press release and letter to the community on SAW's website for more information.

The University administration seems to see their scheduled “Dialogue on Campus Activism” as a way for activists and administrators to respectfully talk about student protests. Unfortunately, the “dialogue” has been framed and organized in a way that does not promote respect for student activists or the issues we struggle over. The administrators’ hand-picked panelists are asked to answer questions that limit all dialogue to the narrow scope of student-initiated “violence.” These questions, like the panel itself, were designed without student or faculty involvement, and are extremely inaccurate, accusatory, and disrespectful. It is difficult to have an open dialogue session when the UCSC administration does not abide by its own Principles of Community to create a respectful and open space for dialogue.

Students Against War is deeply concerned with the UCSC administrations’ cancellation of the Career Fair, as well as its policies and practices to prevent and criminalize student protest. In our continued attempts at cooperation, we have written the administration a letter listing some ways in which a space for respectful dialogue can be created. We look forward to a day when we can communicate respectfully with the administration about both the motivations for and tactics of protests, and we also look forward to a day when they stop preventing students from organizing our own career events. However, this panel (more likely a finger pointing session) will only serve to create more tension and misunderstanding within our community.

We trust that the UCSC community understands this need for respectful dialogue and realizes that the cancellation of the Career Fair was never the intention or goal of preventing military recruitment at UCSC. Students Against War in no way sees this cancellation as a victory, but an unnecessary and irresponsible decision by the administration.

Please join with us to help create a space where all those in the UCSC community can ethically and peacefully coexist and please support student efforts to seek employers who share our concerns for a fair and just society. 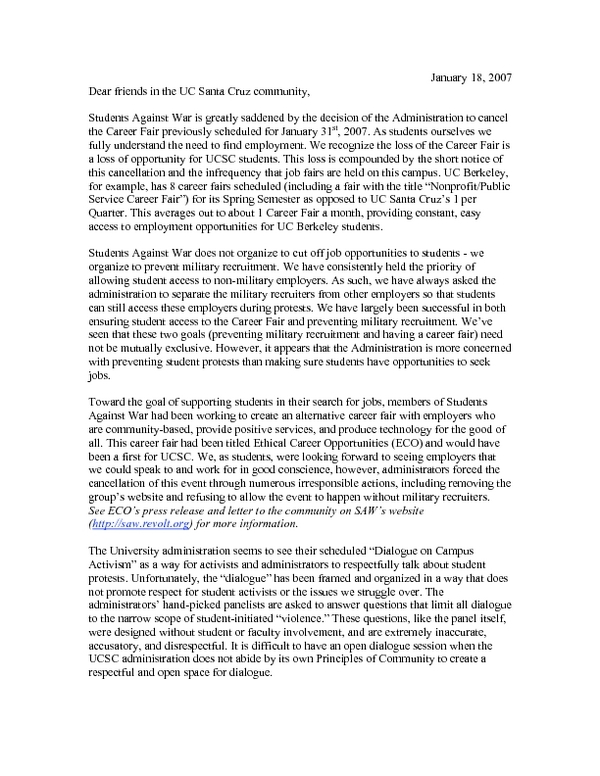 Download PDF (65.0KB)
A PDF version of the letter is attached.
Add Your Comments
Latest Comments
Listed below are the latest comments about this post.
These comments are submitted anonymously by website visitors.
TITLE
AUTHOR
DATE
UCSC administrators are lazy
tired of paying their wages
job fairs
karl roenfanz ( rosey )
Support Independent Media
We are 100% volunteer and depend on your participation to sustain our efforts!