Don’t the Fresno Police have Something Better to Do?

by Mike Rhodes (mikerhodes [at] comcast.net)
Tonight as I was driving by the corner of Shaw and Palm in Fresno I saw a police car with its lights flashing. Two officers were talking to a man who I had seen on the median soliciting money earlier in the day. By the time I got back to “the scene of the crime” the officers were gone. The story below is what David Hamilton, the homeless man who was ordered to leave, told me. 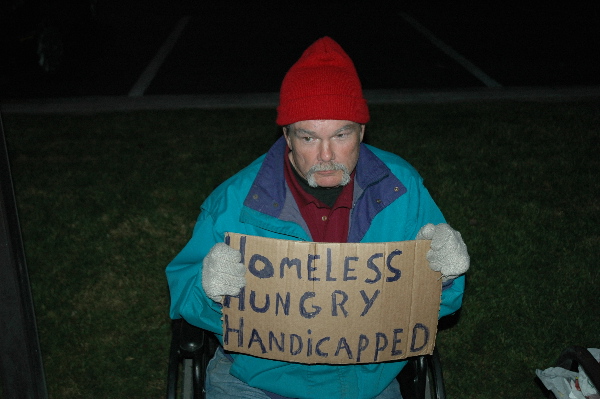 Don’t the Fresno Police have Something Better to Do?
By Mike Rhodes

David Hamilton was trying to make enough money to buy a sandwich at Subway tonight when he was confronted by two officers of the Fresno Police Department. Hamilton said that the officers told him to stop soliciting money and that if he did not get off the median at Palm and Shaw they would arrest him. “I wasn’t bothering anybody. If someone didn’t want to give me money, that is OK.” While Fresno does have an aggressive panhandling ordinance, it doesn’t apply to someone sitting on a median with a sign.

Fresno’s aggressive panhandling ordinance also does not apply to the hundreds of volunteers who sell The Fresno Bee (Kid’s Day) on the medians all over town, including Palm and Shaw. The firefighters are also on this street corner at least once a year soliciting money for their favorite cause. Hamilton said he was given a citation about a year ago for being on a median. “I got a $140 fine for what they said was loitering in the roadway,” Hamilton said.

Hamilton is disabled and uses a wheelchair. “I was hurt on the job and have a spinal cord injury.” Hamilton says he was a quality control manager for a paint store and had an on the job injury which has left him broke and homeless.

Hamilton said the police issue a lot of citations to homeless people, who are often unable to pay the fine. If the fine goes unpaid a warrant is issued for your arrest. If you get stopped by the police, they run a warrant check on you, and you have not paid the fine, you are taken to jail. This is what happened to Hamilton - he was picked up on an outstanding warrant and held in the Fresno County Jail for seven months pending trial on an unrelated charge (which was later dropped). Hamilton said “the court system is unfair, it benefits the rich, and punishes the poor.”

The harassment tonight of David Hamilton is only the latest example of the Fresno Police Department’s ongoing and relentless attacks against the homeless people in this community. For more information see:

END_OF_DOCUMENT_TOKEN_TO_BE_REPLACED
Add Your Comments
Comments (Hide Comments)
§Enforcement is selective
by Ken Hudson (kenhudson2 [at] earthlink.net)
If the person on the median had been selling "The Fresno Bee" newspaper on the annual "Kid's Day," police officers would not only allow the person to stay on the median, they would have given him a dollar and wished him well, as a photo in last year's Bee showed.
Add a Comment
Support Independent Media
We are 100% volunteer and depend on your participation to sustain our efforts!