Add an Event
Newswire
Calendar
Features
Home
Donate
From the Open-Publishing Calendar
From the Open-Publishing Newswire
Indybay Feature
Publish to Newswire
Add an Event
Related Categories: U.S. | Anti-War
San Francisco Candlelight Vigil Commemorates 3000 Who Died in Iraq
by Robert B. Livingston (gruaudemais [at] yahoo.com)
Sunday Dec 31st, 2006 7:35 AM
While hundreds lined up across the street to pay $60 each to hear the Flaming Lips perform at the Graham Auditoreum this evening, about two dozen veterans and anti-war activists gathered in front of San Francisco's City Hall to pay their respects to the 3000 U.S. military personnel who have now died while serving in Iraq. 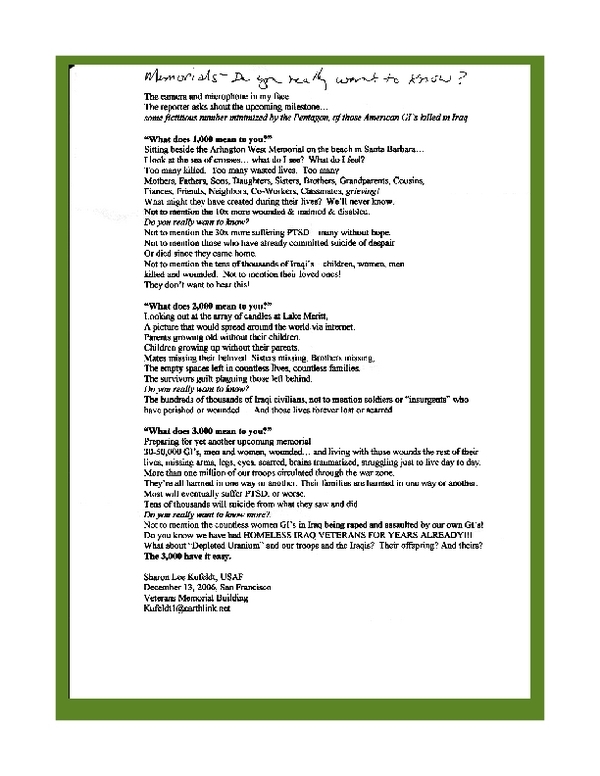 Perhaps it's unfair to suggest that the mostly young men and women who were celebrating the last weekend of 2006 by attending a rock concert should have better spent their time honoring their counterparts: the ones who put on a uniform, followed orders, and finally failed to avoid that which they dreaded in their last waking days... a sudden or horrible death.

"After all," some in line across the street might say, "that was really their choice, wasn't it?" And, "what can we really do to change the way things are?"

What can we do to change things? Indeed. 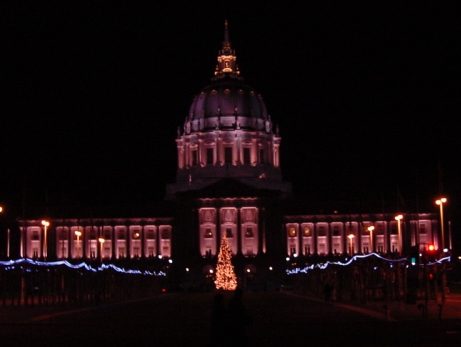 All lit up. It's holiday season after all. If you take a tour of City Hall the tour guide will tell you that the building has the fifth largest dome in the world-- built to match the ego of one of San Francisco's earlier mayors... what was his name?

This evening a small number of people came together to hold a candlelight vigil and recall some people's names-- the names of those who died in Iraq since "hostilities started"-- or since George W. Bush took America to war by invading Iraq in the Spring of 2003.

Earlier, volunteers had hung almost 3000 neckties from the limbs on the trees in front of City Hall. Some people were hanging up more ties while the memorial ceremony was being conducted.

They must have gotten permission from the city to do it-- because there were a lot of ties. It looked very strange. Someone in City Hall must have wanted to help let the volunteers hang the ties. Who were those people who helped the volunteers? Were some of them at the ceremony tonight?
§Protest sign
by Robert B. Livingston Sunday Dec 31st, 2006 7:35 AM 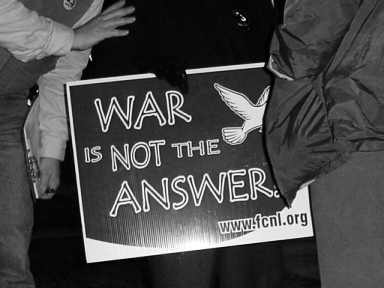 Everyone who came to honor the soldiers this evening was against the war in Iraq. Many nodded with agreement that the war was begun with lies to the American people.

It seemed that everyone at the ceremony believes that America must immediately bring its troops home beacuse our country's being in Iraq is only making matters worse for ourselves and Iraqis.
§Bill Graham Auditoreum
by Robert B. Livingston Sunday Dec 31st, 2006 7:35 AM 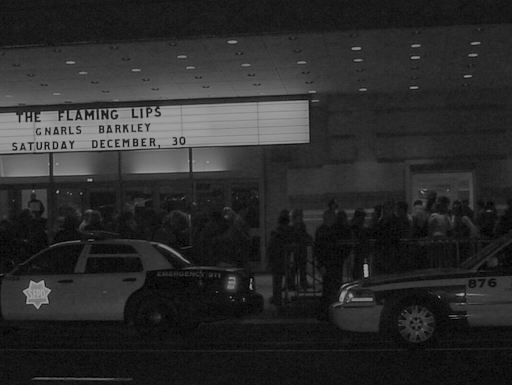 The Flaming Lips is a popular musical group. They attracted many more people than did the peace and veteran volunteers tonight.

With their futures so uncertain today, maybe it makes sense to young people to enjoy what they can.

The "Lips" doubtless had no idea that they might upstage a small ceremony taking place across the street... but one wonders if Sadaam Hussein's execution might not have been hastened to upstage news that the death toll for soldiers in Iraq had hit 3000.

Against the advice of most of their advisors and generals, George W. Bush and Richard W. Cheney seem intent on "staying the course."
§Making a quiet but forceful statement
by Robert B. Livingston Sunday Dec 31st, 2006 7:35 AM 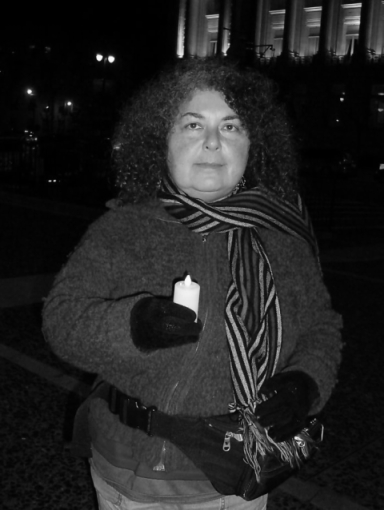 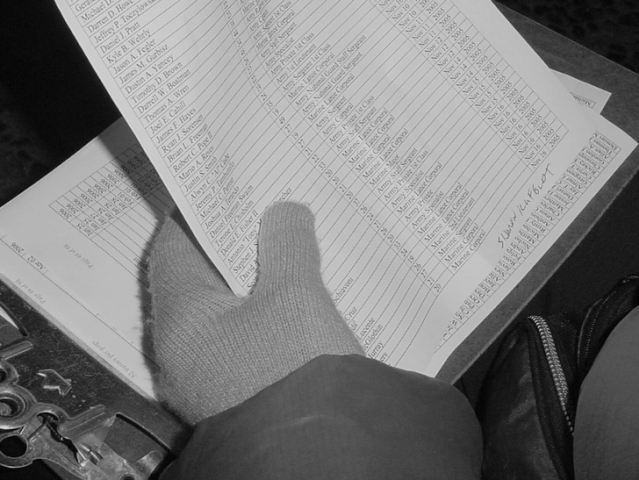 This woman held the 30+ double-columned pages that listed all the names of U.S. military that died in Iraq-- our second war in Iraq. She wrote the poem that you can read if you download the PDF file above. She is the National Vice-president of Veterans for Peace and the Post Commander of the American Legion Post 315 in San Francisco.

She handed the pages listing the war dead out to volunteers who took turns reading the names.
§Woman reading names
by Robert B. Livingston Sunday Dec 31st, 2006 7:35 AM 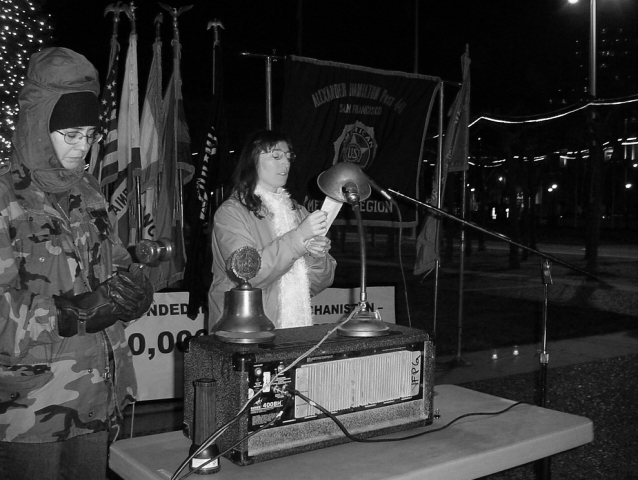 Here is one woman reading names.

The volunteers had hooked up a loudspeaker with an electical cord that ran to an outlet in the sidewalk about 50 yards away. The cord was accidentally pulled out once... but a man ran over to fix it right away.

Very few people, other than the volunteers, took much interest in what they heard. Seems something is always happening at City Hall.

Maybe a few people listened as they hurried by while going somewhere.
§Man reading names
by Robert B. Livingston Sunday Dec 31st, 2006 7:35 AM 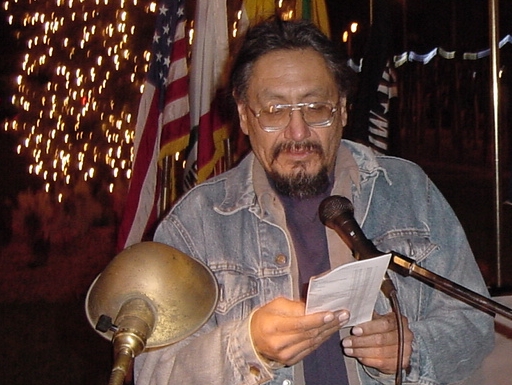 This man read a page or two of names. When he was done, he didn't leave right away. Instead he waited like the others until all the names were read. It would not be respectful to do otherwise.
§Listening to names being read
by Robert B. Livingston Sunday Dec 31st, 2006 7:35 AM 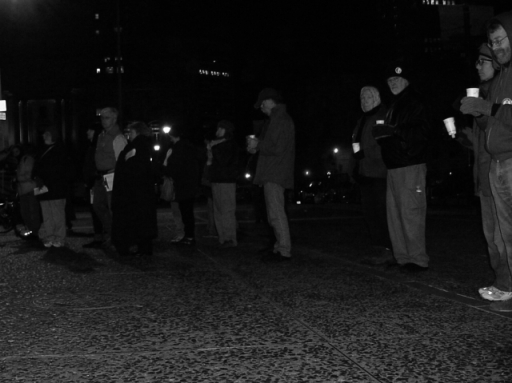 These people are mostly bowing there heads in silence. They did not stand too close to the ones taking their turns reading the names. 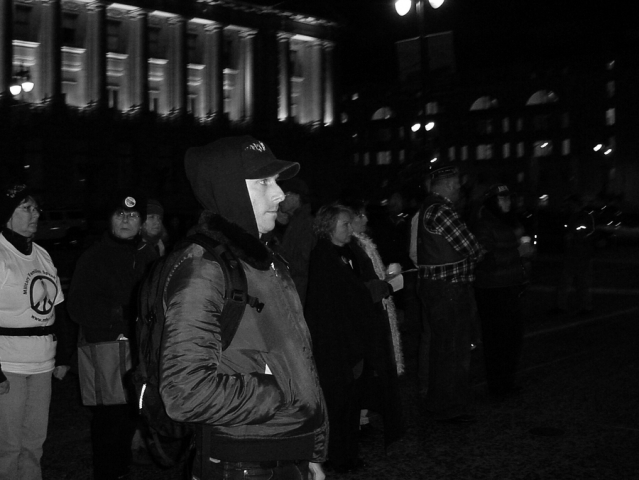 Some of these people volunteered to read names of the service people who had died.

Why did they come here tonight? Was it because they lost a loved one, or because they were anxious thinking about someone they know who is serving far away right now? Was it because they themselves had been to war in the past and are seeking answers to questions they have?
§Sharing sorrow but hoping for a better world
by Robert B. Livingston Sunday Dec 31st, 2006 7:35 AM 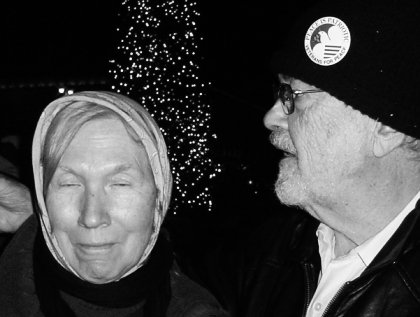 This couple stood and listened solemnly to the names of the dead service persons being read.
§John Forrett reads names several times
by Robert B. Livingston Sunday Dec 31st, 2006 7:35 AM 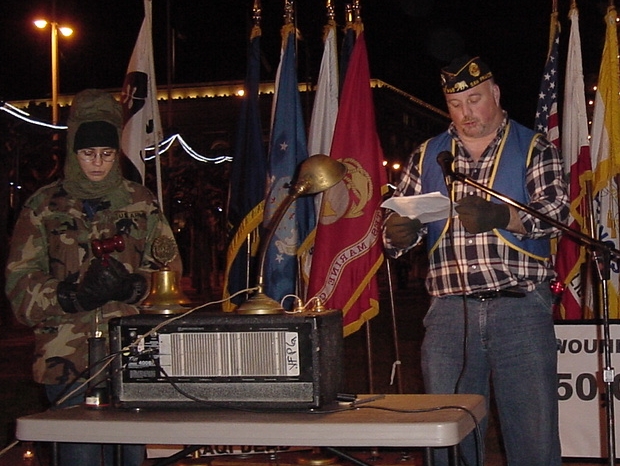 Commander Forrett reads from names several times because there are not enough volunteers to help read all the names,

To his right, the young woman rings a bell as is military custom. Normally the bell is rung once for each person who has died, but because there are so many names to read, it is being rung once for every ten names.
§Helping to read the names
by Robert B. Livingston Sunday Dec 31st, 2006 7:35 AM 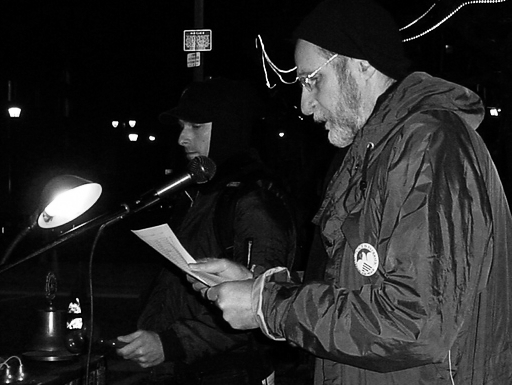 Jim Dorenkott, who is a veteran, shares in the reading of names.
§Commander Follet explains the vigil to newsman Ken Wayne
by Robert B. Livingston Sunday Dec 31st, 2006 7:35 AM 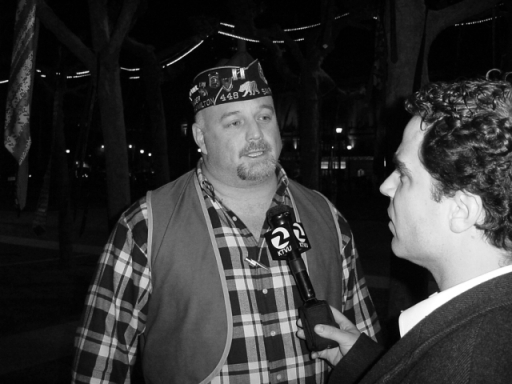 This is John Forrett who is the Commander of the Alexander Hamilton Post 448 American Legion. The 448 post is unique because it has many members who are gay, lesbian, bi-sexual or transgender. Yes. This is San Francisco.

If you visit the post's website you can learn something. These people are proud of their service to their country. They know that bullets and bombs do not discriminate like people do.

John is talking to reporter Ken Wayne from Channel 2. If you watched the news tonight at 10 PM you know that the newsman asked excellent questions and produced an admirable story.

John is explaining that the ties are symbolic of every person who was killed in Iraq.
§The ties hang from the trees like Spanish moss
by Robert B. Livingston Sunday Dec 31st, 2006 7:35 AM 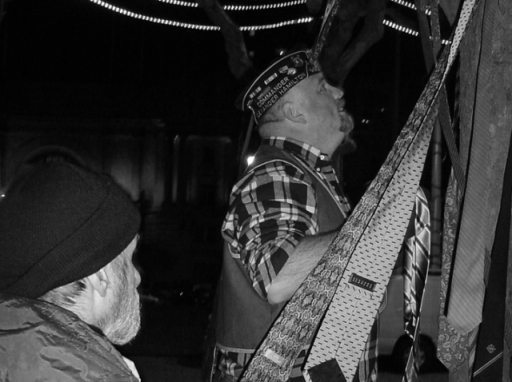 After talking to the reporters from KTVU and KRON, Commander Forrett fixes some more ties on the trees in the plaza in front of San Francisco's City Hall.
§Not easy to do
by Robert B. Livingston Sunday Dec 31st, 2006 7:35 AM 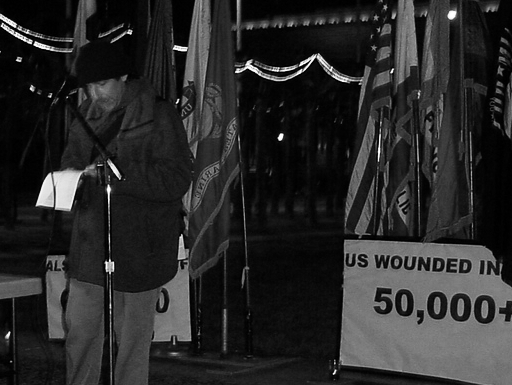 This man shares the reading of the names. His voice trembled with deep emotion.
§Knowing the numbers is not easy-- but necessary
by Robert B. Livingston Sunday Dec 31st, 2006 7:35 AM 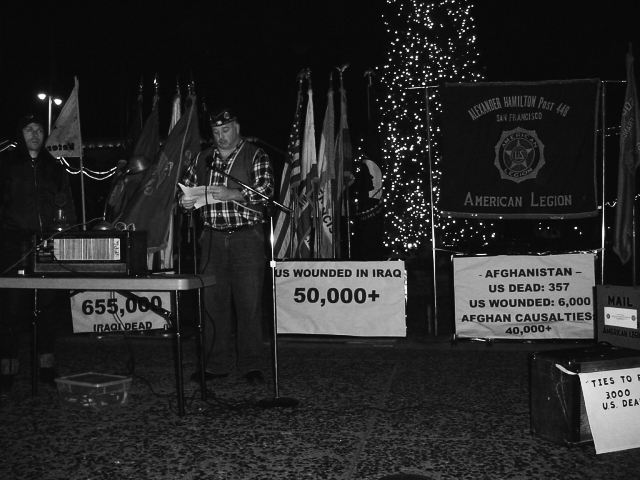 The signs speak for themselves. Commander Forrett said that he had recently heard that U.S. wounded may be closer to 60,000 today.

Here sources of some figures: 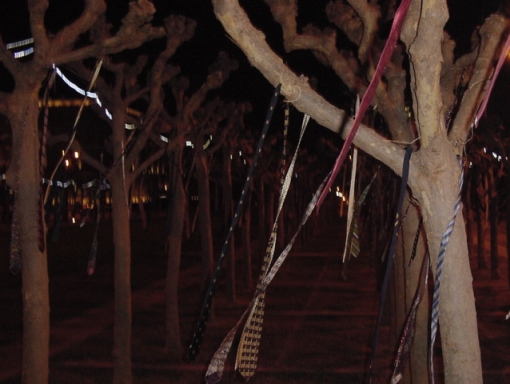 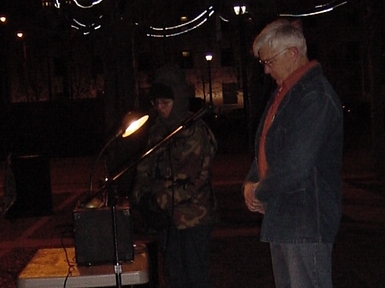 This man asked for a moment of silence after all the names were read. (Except for those whose identities are still unknown.)
§Please No More War - Bring the troops home now
by Robert B. Livingston Sunday Dec 31st, 2006 7:35 AM 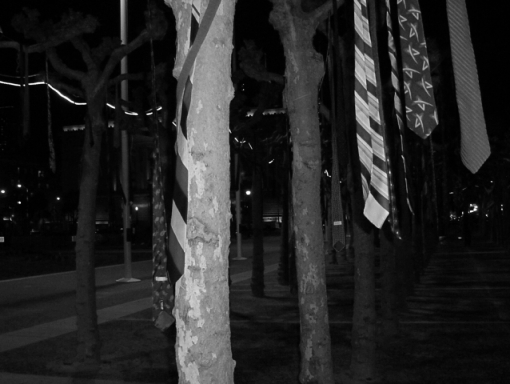 Here are some useful links:

United for Peace and Justice - Bay Area
http://upj-bayarea.org/
§Errata
by Robert B. Livingston (gruaudemais [at] yahoo.com) Sunday Dec 31st, 2006 1:33 PM
Cheney's middle initial is B., not W. as stated in the above story. B. stands for Bruce, just as my own middle initial stands for Bruce. I do not like knowing that I share something with him.

When the activists announced the vigil, the reason they gave was:

Every life counts, whether it's one of 3,000 U.S military deaths or one of the 500,000+ Iraqi deaths estimated by the Johns Hopkins/MIT study. So, while the 3,000th death is no more
or less important than the 2,999th or the 3001st, it is only natural to pause and think about the human cost of war when we reach such a grim milestone.

But we cannot give into despair. There is hope for peace in Iraq-- and together we can turn our hopes into a change for the better. 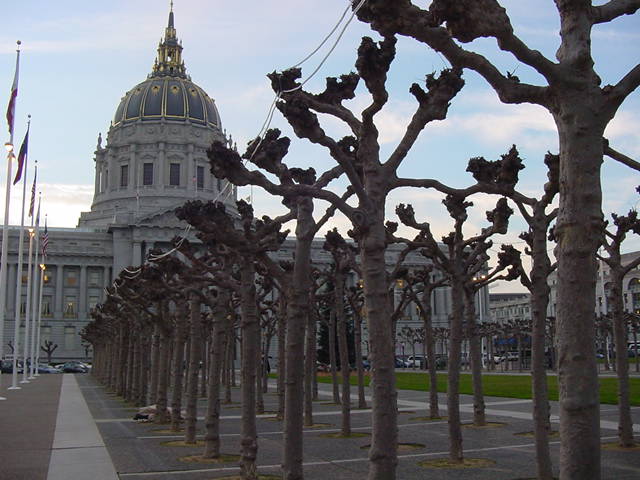 Walking by City Hall this afternoon I was surprised to see that all the ties had already come down. I was surprised because only yesterday while listening to a television news report about area wide protests, (including CODEPINK's courageous stand at the Golden Gate Bridge) there was a brief mention that the ties were still up, and could be seen in San Francisco.

It seems to me that a statement that took so much planning and work could remain possible for a few days more.

But they are gone.

In honor of Nancy Pelosi's coronation this week?
Add Your Comments
LATEST COMMENTS ABOUT THIS ARTICLE
Listed below are the latest comments about this post.
These comments are submitted anonymously by website visitors.