by Takver
Ecuador seems likely to champion the Free Software movement in migrating Government systems to Free Software, according to a blog report. Rafael Correa, the president-elect of Ecuador in South America met with Richard Stallman of the Free Software Foundation and GNU project on December 12. 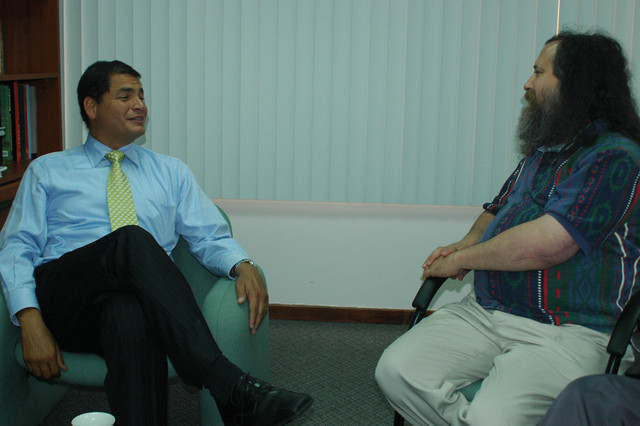 According to the report from free software advocate, Rafael Bonifaz:

[…] Stallman spoke [to Correa] for almost 20 minutes nonstop, without Correa saying anything, just listening. After Stallman was finished speaking, there were a few questions and a small conversation ensued, in which both completely agreed and Correa asked his advisors if Ecuador should migrate to free software. Without hesitation, they said yes, and everyone parted with a full-blown smile on their faces, Stallman included […]

According to another report, the president-elect, Rafael Correa in the meeting with Richard Stallman, committed Ecuador to eliminating the censorship of free software in the country.

Richard Stallman was touring Ecuador attending Universities talking about Free Software and the problems of copyright. Stallman rejects the application of copyright laws to ideas and computer science. The GNU General Publication Licence was the first 'copyleft' licence which enabled the Open Source and Free Software/Software Libre Movements to cooperatively build software that respects the freedom of software users.

Of course, making a decision in principle, and succeeding in the implementation are worlds apart. Obstruction by software companies is likely, as well as bureacratic resistance to migrating to new systems.

According to the Rzone Blog page, the challenge is now to form the Ecuadorian Association of Software Libre.

The RZone blog forecasts obstruction: "Initially, proprietary software companies will wield the flag of 'market economies and the freedom to choose'. Which we all know to be duckspeak, because freedom in software is not a matter of dollars but principles."

"Later on in the game, Rafael Correa, and the rest of the free software movement in Ecuador, will face enormous pressure from foreign organizations. That pressure will come in the form of threats of economic sanctions, withholding of privileges, and it might even escalate to blatant coup d’etat attempts."

But the RZone blog is optimistic for the future: "But make no mistake: we will succeed. We will leverage every legal and morally just resource to get there. It’s not just a battle for software: it’s a battle for free culture. Our free culture, which is slowly being eaten away by monopoly interests from unscrupulous people and corporations."

Correa was elected President of Ecuador on November 27, 2006, on a leftist platform with support from much of the countries poor and indigenous. He received 56.7% of the votes against the 43.3% for right-wing opponent, banana tycoon Álvaro Noboa. His presidency will formaly start on Jan 15, 2007 and run for 4 years.

But the Ecuador parliament remains hostile to his program. Correa has repeatedly referred to it as a "sewer" of corruption. Reforming the constitution will also be an up hill battle with a legislature that has sufficient votes to impeach him.

On December 10, Rafael Correa, said that he will not sign a free trade agreement with the United States but will seek extended trade preferences under an anti-drug agreement. This comes after Trade agreement talks between the U.S. and Ecuador derailed in May, after Ecuador canceled the operating contract of California-based Occidental Petroleum Corp.

Correa has also threatened to not renew the lease on a US military base in Ecuador, currently with 400 soldiers stationed and the staging ground for drug surveillance flights. "If they want," Correa has said ironically, "we won't close the base in 2009, but the United States would have to allow us to have an Ecuadoran base in Miami in return."

Ecuador is an oil exporter and Corea has already announced the need to renegotiate contracts, according to a Bloomberg report: "Conditions have changed and some contracts do not reflect that; some old contracts pay almost nothing on producing wells," Correa told reporters at a summit of Latin American leaders in Cochabamba, Bolivia. "We need to make sure that the average returns are sufficient for the needs of the country."

Some commentators belief that Correa will be a pragmatic leader with a number of symbolic and rhetorical gestures to satisfy his supporters while not defaulting on debt or seizing corporate assets. Joseph Stiglitz, a former chief economist at The World Bank said "He knows the realities of global economics,". Indeed, Correa is a US trained economist.

§Corrections
by Richard Stallman
The article says that I reject the application of copyright law to
"ideas and software", but this is not accurate. First, copyright law
never applies to ideas -- it covers only to the details of expression
of a work of authorship. I believe that software users should have
the freedom to run it, study its source code, change it, and
redistribute it. Simply abolishing copyright on software would not
necessarily achieve this.

One of them is similar to the US Digital Millenium Copyright Act: it
prohibits anything that helps people like you and me bypass and escape
from Digital Restrictions Management (a malicious feature found in
iTunes, Vista, and the Tivo; see DefectiveByDesign.org). The other
applies patent law to software techniques, algorithms and features.
Since a large program combines thousands of techniques, algorithms and
features, it surely infringes hundreds of patents, meaning that the
developer has hundreds of chances to get sued.

The correct name of the license that I developed is the GNU General
Public License. For progress on developing version 3 of the GNU GPL,
see gplv3.fsf.org.

END_OF_DOCUMENT_TOKEN_TO_BE_REPLACED
Add Your Comments
Latest Comments
Listed below are the latest comments about this post.
These comments are submitted anonymously by website visitors.
TITLE
AUTHOR
DATE
Software y Libertad
penguino
Support Independent Media
We are 100% volunteer and depend on your participation to sustain our efforts!