by Mike Rhodes (MikeRhodes [at] Comcast.net)
Is the railroad company being used as a proxy to attack the homeless in Fresno? Pictured below are Captain Greg Garner and officer Rey Wallace of the Fresno Police Department. They were there to “keep the peace” as the railroad company conducted a raid on a homeless encampment. 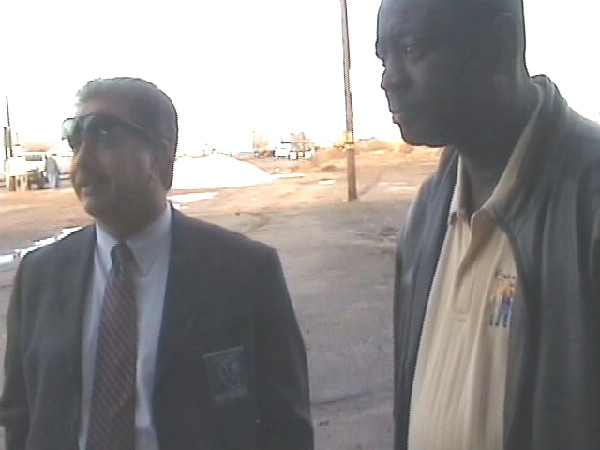 Homeless people have recently won several victory’s in Fresno. The success followed a lawsuit filed on behalf of homeless people which seeks to stop the city from taking and immediately destroying their property. See:

A couple of days after the court issued a Temporary Restraining Order (TRO) against the City of Fresno, no trespassing signs went up near homeless encampments that sit next to a railroad line. Geno, a homeless veteran who lives next to the tracks, said “I have lived here for three years and never been bothered by the railroad employees. They would come by and we would talk, but they never told me to move.”

Geno says “a couple of weeks after the signs went up, the railroad cops came by and told me to move on.” The bulldozer, clean up crew, and police arrived on December 13. Geno, and the other homeless people living in the area were told to get out or they would be arrested and their property would be destroyed. Geno and others openly speculate about if the police are using the railroad as a proxy to continue their illegal rampage against the homeless. The presence of James Betts, the attorney who represents the city on this issue, fueled speculation about the railroad/city collaboration in these attacks.

The railroad “clean up” went about 50 feet on either side of the tracks. Many of the dozen or so homeless people who were living within 50 feet of the tracks were surprised at the arrival of the crews. Juan, for example, who lives under the overpass near San Benito and H street had not been warned. He said “I just found out about this today.” Moments later a bulldozer was sweeping through the area where his tent had been.

As Fresno Police Department Captain Greg Garner and officer Rey Wallace watched, the bulldozer swept back and forth across the landscape. Geno, who had been told that the clean up would take place the next day asked Garner why the clean up crew was there now. Garner said he did not know and that they (the police) were just there to observe. They claimed they had no direct role in the operation. Garner told Geno that “they (the clean up crew) are here now” and that he better get his stuff moved. He also told him to just move his things on the other side of the retaining wall that is at the end of the railroad company property. Geno said the owner of the lot, on the other side of the retaining wall, does not want them there either. So, Geno asked the question you hear a lot - “where are we supposed to go?”

As the “clean up” was in progress, Liza Apper and I talked to FPD Sgt. Bruce Hartman, who said that eventually all of the homeless under the overpass would be moved. He said the City of Fresno owns the land (under the overpass) and the plan is to move them out. Hartman did not have a time frame for this but went on in some detail about the short, medium, and long term plans for the homeless. He talked about plans for another homeless shelter on city land South of the Rescue Mission - in an area on the old Golden State Blvd, where there are a number of old hotels. He said the city owns the property and will level the land and build something there in conjunction with Poverello House. The push on the homeless is to move them to the Southern end of the industrial section of downtown, near Jensen avenue.

There was a significant police presence during this operation - I almost got arrested when I crossed a vacant lot to access the site of the sweep. According to FPD officer Twitty, who detained me, checked for any outstanding warrants, and ran my car license plate number through their system, claimed the owner of the property had complained that I was trespassing. A more cynical Indymedia reporter might think this was harassment or interference with our first amendment right to gather the news.

Rory, another homeless man who lives in this area told me that immediately after I left on the first day of this sweep several police cars pulled up onto the vacant lot. He said they told him to get his stuff out of there or he was going to be arrested. Rory said they told him that after they arrested him they would destroy his stuff. Rory, who lives on the vacant lot (not on railroad property) was clearly shaken and moved his tent a short distance away.

After a two day stand off, the clean up crews swept through the area picking up trash and then disappeared. The threats and intimidation had not worked. Most of the homeless were able to stand their ground, and Geno’s American Flag continues to fly over his home.

###
END_OF_DOCUMENT_TOKEN_TO_BE_REPLACED
§Geno is a homeless veteran.
by Mike Rhodes 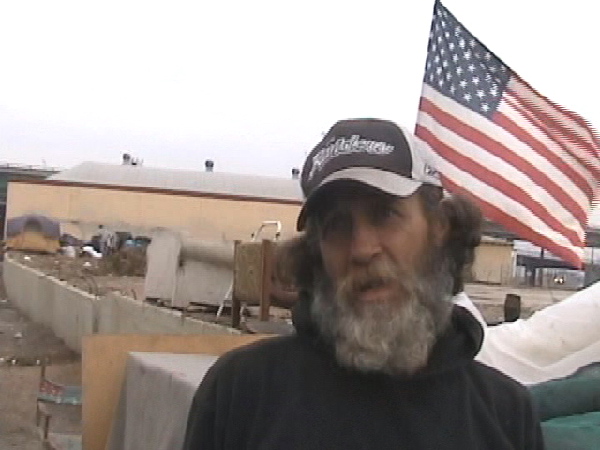 §Charles Montgomery’s property was destroyed when he lived next to the railroad tracks.
by Mike Rhodes 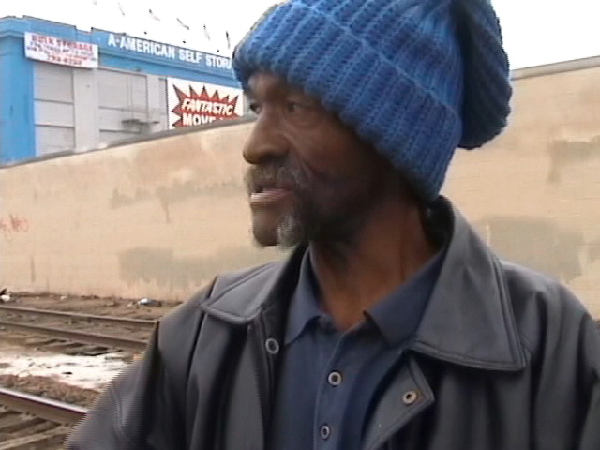 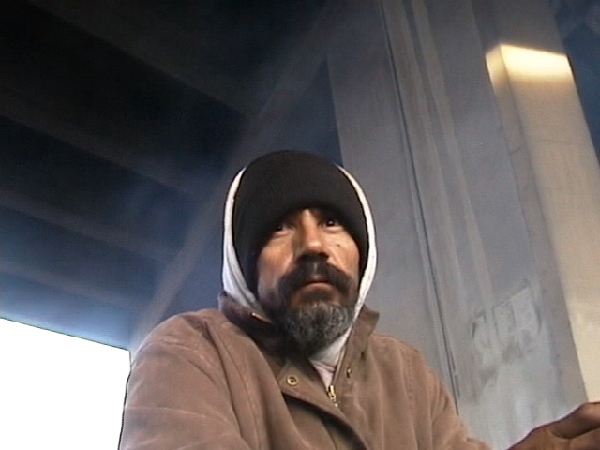 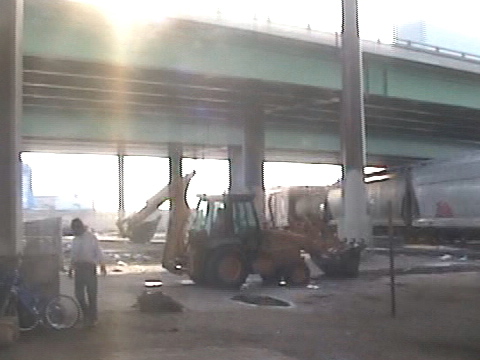 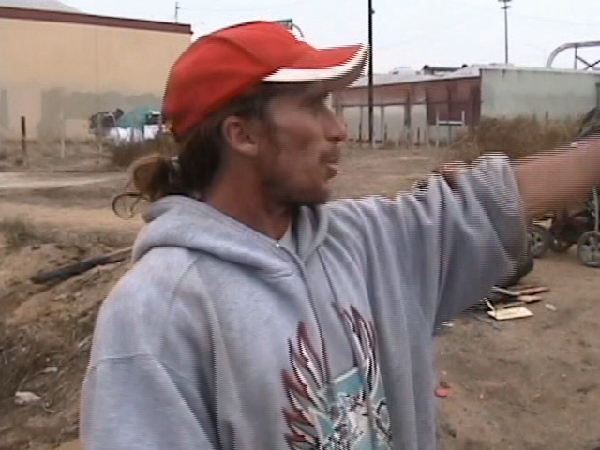