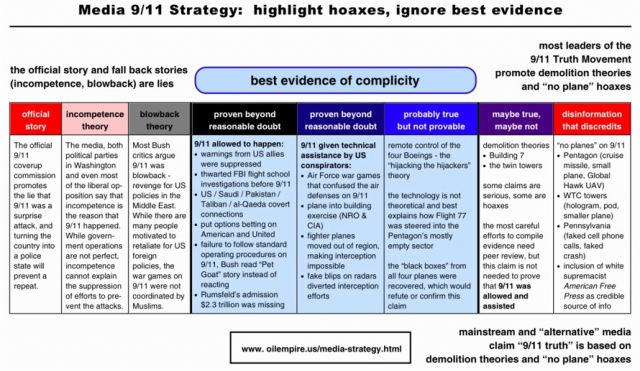 The classy left gatekeeper publication The Nation has just published another 9/11 debunking article, by Christopher Hayes. Despite the publication’s claim to be disseminating “unconventional wisdom,” this article is quite conventional in terms of debunking technique and the overarching belief that the system just needs some tweaking.

Hayes’ thesis is that although the 9/11 truth movement is wrong, the US media and the Bush administration itself are much to blame for the emergence of this grassy-knoll conspiracy theory.

The media are to blame for not being skeptical, and for reporting everything that Bush says verbatim, he says. So many of Bush’s claims and announcements turn out to be a crock of baloney that it’s no wonder the public doesn’t believe either the media or Bush. And the 9/11 Commission’s report has problems, he admits. Well, Hayes is definitely on to something here, and while I don’t know about Hayes himself, most of us with functioning brains saw through Bush’s lies from approximately the day after he was inaugurated. What surprises me most in this respect is that people like Hayes express disbelief about most or all of what Bush says except for 9/11. On the one issue of 9/11, they just believe Bush. This is what I call the “faith-based” or “Fox Mulder” mentality. “I want to believe.” For some reason these people want to believe Bush’s flimsy, contradiction-ridden, logic-challenged story. I say this because without that strong will to believe, Bush’s story simply cannot stand up to close scrutiny.

One wonders if Hayes has ever seen a White House press conference. Has any one of Bush’s press secretaries ever given a straight answer? Every answer is evasion, spin, distortion, or an outright lie. Or these Answer Men simply do not answer the question! Everything posted on the White House website is smarmy, insincere propaganda. And yet, on this one issue of 9/11, Hayes and the rest of the “I want to believe” crowd believe Bush. Truly, it is faith-based thinking that beggars belief. And this from people who claim to be journalists!

In all-too-predictable fashion, Hayes latches onto the physical evidence argument and attacks the video “Loose Change.” This is classic debunker technique: attack your opponent’s weakest point, but make no mention of facts and arguments that you cannot counter. To be honest, the 9/11 truth movement itself is much to blame here. Starting on the very day of the tragedy, Bush quickly set to work concealing and destroying the physical evidence. Crime scene cleanup began immediately, videos were quickly confiscated (how did law enforcement agents know immediately where all those videos would be?), and precautions were taken to keep evidence out of public view. As a consequence, there is virtually no physical evidence, and people who decide to take this route are reduced to arguing about simulations and melting points, and about photographs and poor-quality videos, whose provenance and chain of custody are in many cases unknown. A weakness of the 9/11 movement, therefore, is overemphasis on the physical evidence argument, which is a very easy target, instead of emphasizing the huge volume of known and verifiable facts which all point in the direction of US complicity in 9/11 (an excellent work in this respect is Michael C. Ruppert’s Crossing the Rubicon).

The breathtaking dishonesty of Hayes and his ilk lies in their constant barrage against this easy physical-evidence target, while ignoring the colossal volume of excellent circumstantial evidence against the Bush regime. In fact, in my own debates with debunkers, I have found that they actually refuse to address this evidence, claiming that it is not evidence! That is how desperate they are to ignore it.

Let’s consider just a few items. Take the timeline, for instance (David Ray Griffin’s analyses of timeline discrepancies are highly recommended). It never worked from the start, despite the 9/11 Commission’s efforts to tweak it into some sort of workable configuration. For about five years, honest people were pointing at this leaky story and asking questions. Then suddenly this year, the government gives it a major overhaul. Well, excuse me, but if the first, official, Commission-approved timeline was the truth, what is the need for a complete overhaul and major change in the story? Doesn’t Hayes think this is just slightly strange? Why, instead of writing a debunking article, didn’t he expend a little ink and brainwork on this problem? We know the answer: Close scrutiny of the timeline (any version) shows that Bush’s story can’t possibly be true. Their reaction is the same as that of religious authorities in the Middle Ages to the heliocentric theory. They just reject it out of hand because it conflicts with their faith.

The same goes for so much more evidence. Debunkers do not want to talk about the war games that diverted and paralyzed air defenses, and confused air traffic controllers. They don’t want to discuss insider trading, or the connections with oil, drugs, intelligence services, “homeland security” scams, the Israel lobby, the money trail, the network of elites who stood to profit, or a whole slew of other damning evidence. They just dismiss all of this out of hand, claiming it is not evidence.

To sum up, 9/11 debunking thrives on intellectual dishonesty, illogic, and a faith-based mindset. If the 9/11 truth movement wants to address this properly, it must get over its over-dependence on the highly speculative and theoretical physical evidence argument, and instead challenge debunkers with the vast body of known and verifiable facts that point to US complicity. 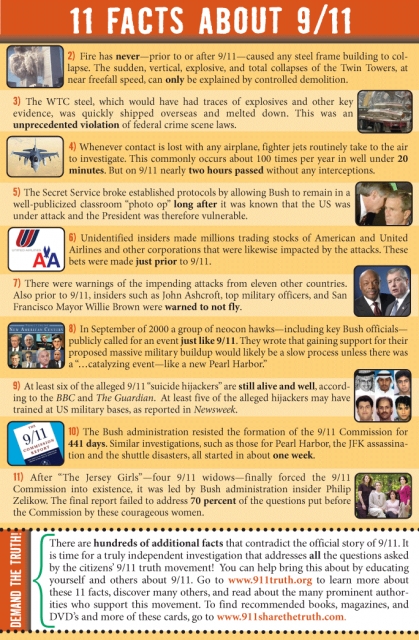