Add an Event
Newswire
Calendar
Features
Home
Donate
From the Open-Publishing Calendar
From the Open-Publishing Newswire
Indybay Feature
Publish to Newswire
Add an Event
Related Categories: International | Environment & Forest Defense
Whaling: Sea Shepherd prepare for Enforcing Conservation Law
by Takver
Monday Dec 11th, 2006 7:30 AM
The Farley Mowat, flagship of the Sea Shepherd Conservation Society, departed Melbourne, Australia on Monday 11 December for the Southern Ocean Whale Sanctuary to stop the whale slaughter by the Japanese Whaling Fleet. The Farley Mowat will be joined by a new Sea Shepherd vessel, The Leviathan, already underway to the Sanctuary. The two vessels from the Sea Shepherd Conservation Society will attempt to uphold international law and disrupt and disable the Japanese whaling fleet. 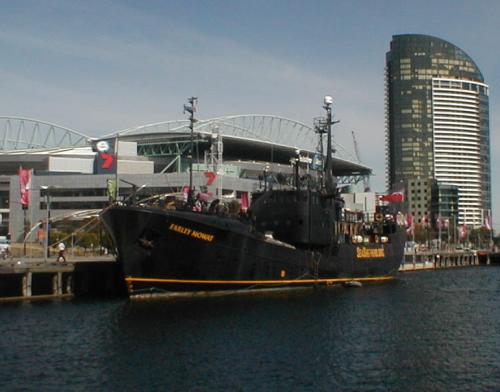 The Farley Mowat has been docked in Melbourne from July 2006, with guided tours of the ship, and raising funds and supplies to counter the Japanese Whaling hunt in December 2006 to April 2007.

"This time, with the new ship, they can't lose us. If they can't shake us off I am pretty confident we can stop them. If they get violent towards us I suppose it could get very physical. We are quite willing to instigate an international incident over this," Mr Watson said last week. "Our Leviathan is at sea and on the way south to the coast of Antarctica. It looks as if we will be in a position to confront the Japanese whaling fleet in the Antarctic Whale Sanctuary during the last week of December."

During August Sea Shepherd announced the purchase of a new ship. By October the purchase had been stymied by the Government of Antigua, where the vessel was registered. Antigua is a pro whaling nation. Another vessel that matched the speed and 'ice classification' was quickly sought and found by the organisation, a former US coastguard ship, but with much more secrecy attached to the purchase and refit.

"The Southern Ocean Whale Sanctuary has been under siege for nearly two decades by the Fisheries Agency of Japan's whaling fleet, and it’s time for the IWC to end the annual slaughter,” said Danny Kennedy, Greenpeace Australia Pacific campaigns manager. “Now that the Southern Ocean whale sanctuary has been recommitted to by a majority of nations, governments need to work to enforce its boundaries."

Whaling is a violation of International Conservation law

Captain Paul Watson outlined the legal arguments for their actions in 2005 saying:

It is not illegal to interfere on the high seas against their illegal whaling activities. In fact, we are legally authorized to do so in accordance with the U.N. World Charter for Nature.

The United Nations World Charter for Nature states in Section 21:

Minke whale being processed for whale meat The crime here is the illegal slaughter of thousands of whales. There is no such thing as “research whaling,” and even if there was, it is still not legal.

A recent report that the Australian Navy has updated its rules of engagement regarding illegal fishing boats has been welcomed by Sea Shepherd Conservation Society. The rules of engagement have been rewritten so the Navy has the power to shoot at illegal fishing boats. The aim would be to disable the boat by hitting the engine or the rudder rather than to sink the vessel.

However, Sea Shepherd believe it is hypocritical of Australia in how they apply these rules. "This blatant discrimination favouring Japanese poachers is hypocritical," said Captain Paul Watson from the Sea Shepherd ship Farley Mowat in Melbourne harbor. "The Australian Navy needs to start seriously kicking Japanese poachers in the ass for illegally slaughtering whales. I think these new rules of engagement are great, but they need to be applied across the board to ALL poachers in Australian waters and not just against poachers from poor nations."

"The message that Australia has been sending is that if you are a poor nation poaching in Australian waters, you're in trouble, but if you are a rich nation doing the same thing, it's okay because we would like to sell you uranium and buy your beer." said Captain Watson.

The six-ship Japanese whaling fleet left from the southern port of Shimonoseki on 15 November to begin this year's hunt, according to a Fisheries Agency statement. They will target 850 minke whales, and 10 fin whales, a species listed as endangered under the Convention on International Trade in Endangered Species (CITES). Threatened Humpback whales will also be targeted. 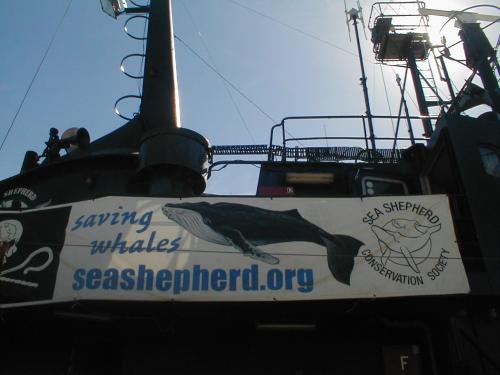 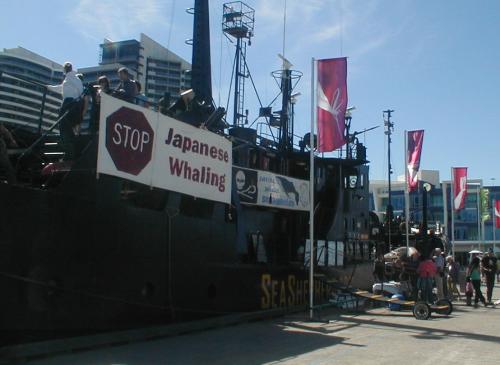 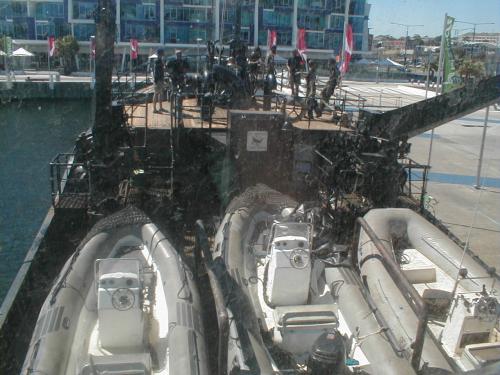 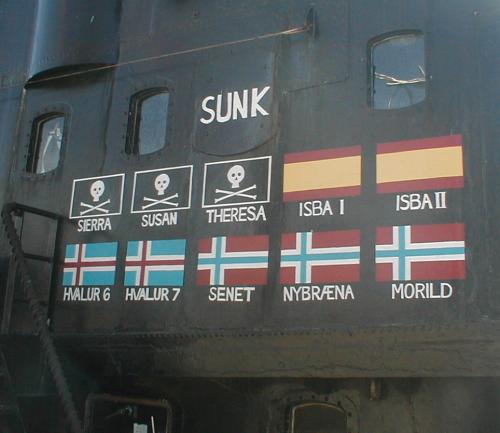 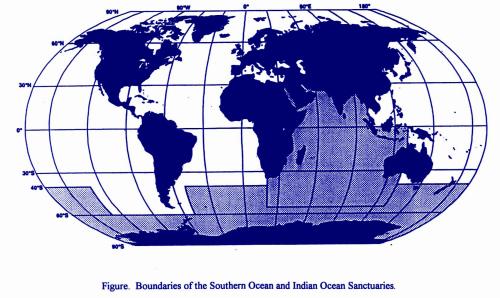