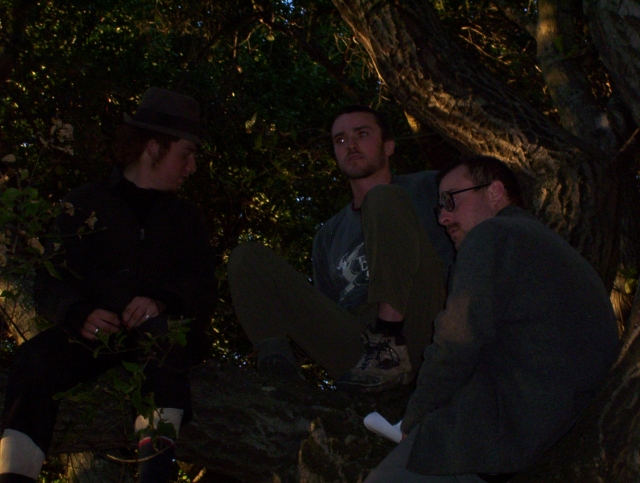 original image (1632x1232)
Come support a tresit in Berkeley. Today at 5:00 a.m. people set up a treesit to protect ancient Oak tees in Berkeley. The University of California wants to cut the tres for space for a new gym. Alternatives exist and 200 year old trees are irreplaceable. There are metings of the UC Regents on Tuesday to attend and the treesitters can always use visits-24 hours a day. Th site http://www.saveoaks.com has lots o background information and a map to the location. Basicaly it is in front of Memorial Stadium on the west side of campus, just north of Internatioal House. The police have been by several times but no action has been taken against th sit yet. Today was a big game between Stanford and UC and the treesit wa set up to let the tens of thousands of fans know what is planned. Reactions were mixed but many people supported the trees

Please think about joining the sit, the ground grup or just stopping by to say hi.

Here is the press release from earlier in the day:


Activists Take to the Trees to Defend Oak Grove

Berkeley, CA -In early morning hours of Saturday, December 2, one University of California (UC) student and at least 2 local residents, including former mayoral candidate Zachary Running Wolf, climbed and occupied trees in a grove of Oaks that UC plans to cut down. UC is planning destroy this majestic grove in order to build a parking lot and sports training facility. This unique eco-system, the last grove of coast live oak (Quercus agrifolia) in the Berkeley lowlands, is protected by municipal code. However, UC, the largest landowner in Berkeley, claims they do not have to obey city laws and codes.

The California Native Plant Society said “This site is of great value as a gene bank for Coast Live Oak.” Environmentally this area is important habitat for a myriad of different species that have been pushed out of their nearby oak woodland habitat by development, primarily due to UC expansion. With the ongoing devastation from Sudden Oak Death Syndrome keeping this grove intact becomes even more important.

This tree-sit action is being taken after the university ignored the concerns of residents, students, scientists, the Berkeley City Council and many others. Community members have, for years, been frustrated by the University’s apparent disdain for citizen input and local opinion. “Having old trees and open spaces is important to the health of our community and children. I just don’t see how an institution supposedly dedicated to teaching good stewardship of the earth could even suggest cutting these trees.” said local resident Danielle Chase.

The planned cutting of the precious oaks has brought hundreds of alarmed local residents and university students to speak out against this destruction and degradation of local wilderness. After exhausting many other avenues, Running Wolf decided to take direct action because UC is stonewalling community, student and even City of Berkeley efforts to find workable solutions. “I’m not coming down until these trees are protected.” said tree-sitter Running Wolf.

The tree occupation is ongoing, located between Piedmont Avenue and Memorial Stadium on the UC campus. For more information and to speak to the tree-sitters directly call (469)-544-9756. 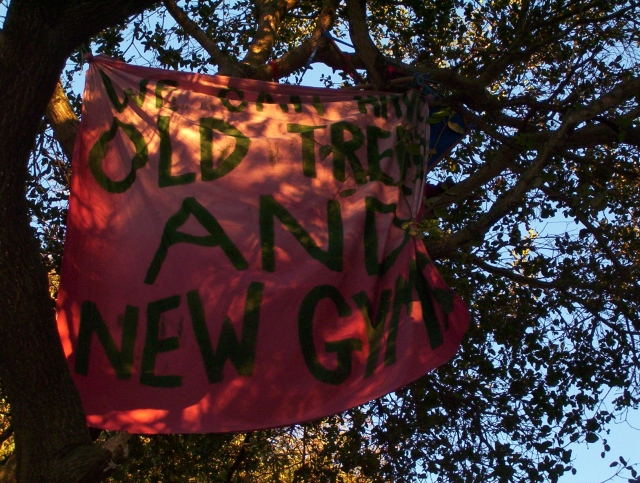 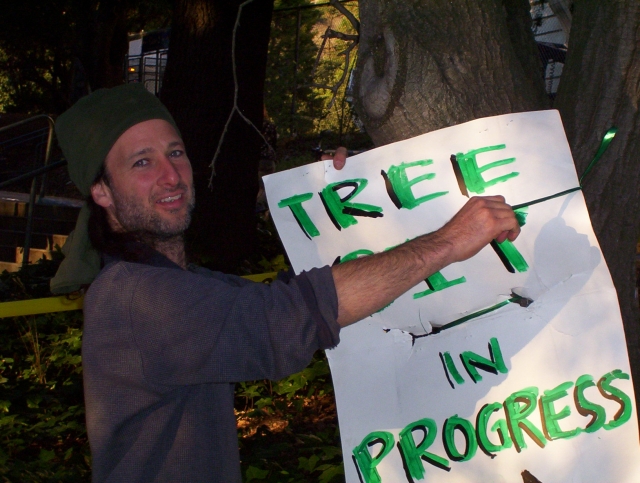 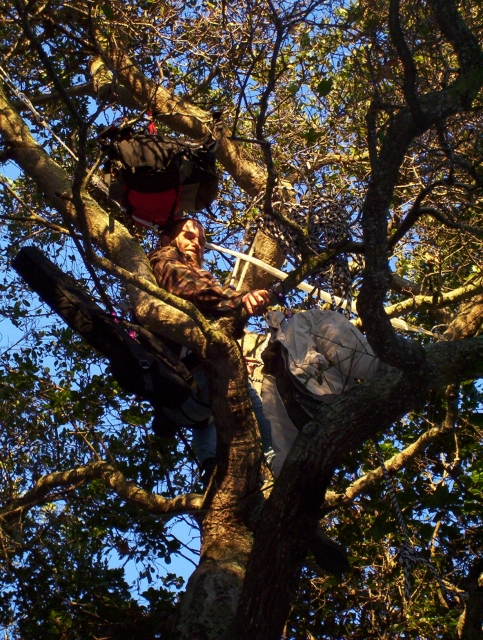 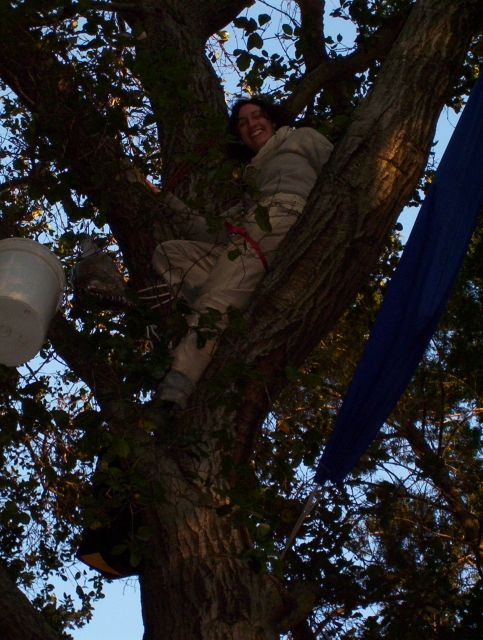 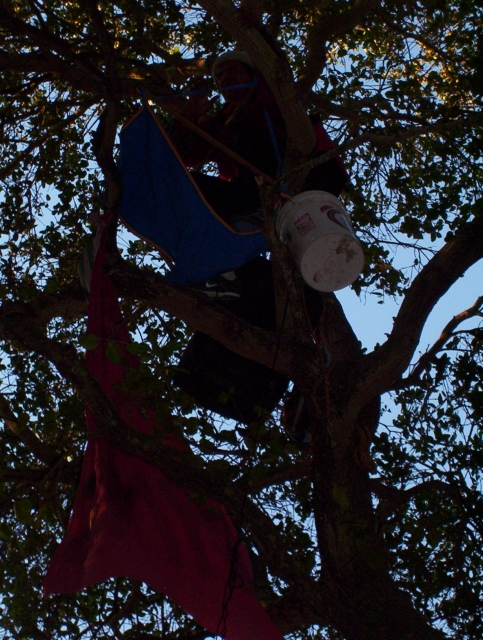 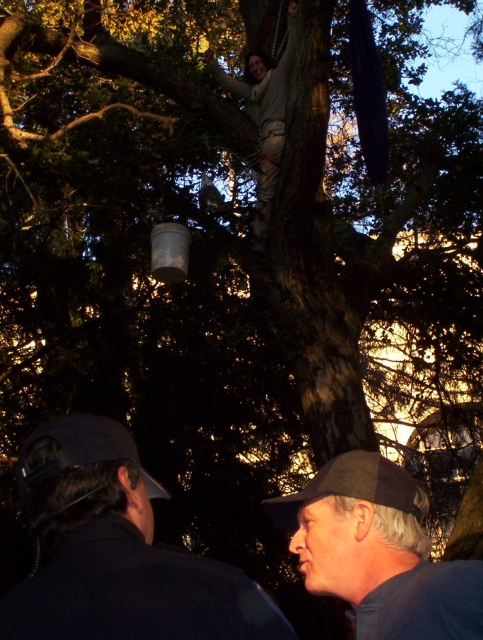 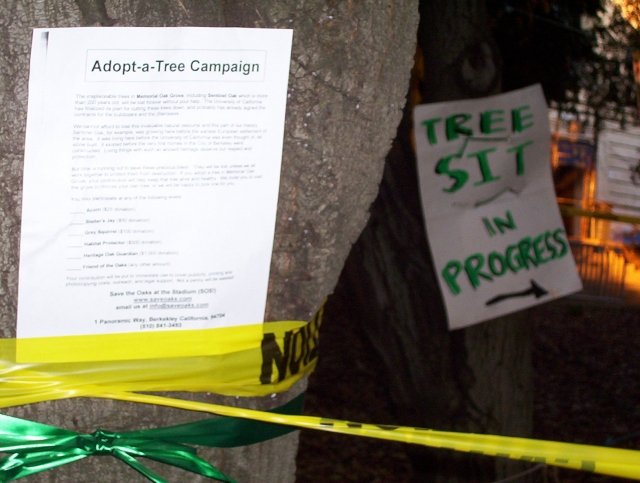 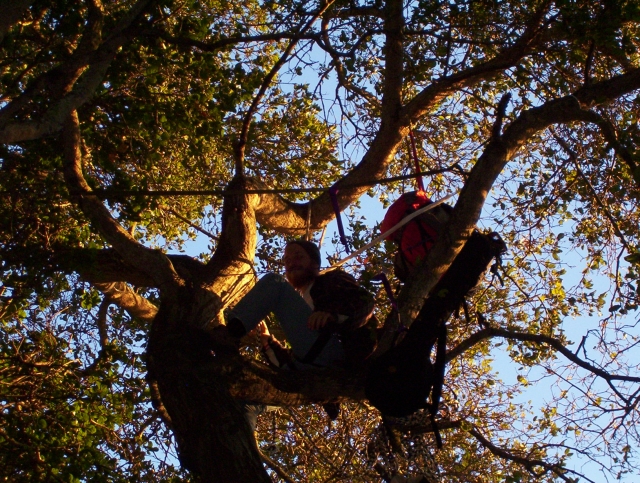 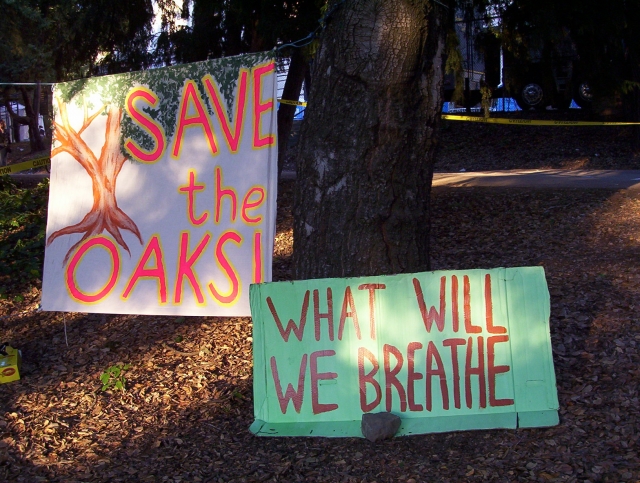 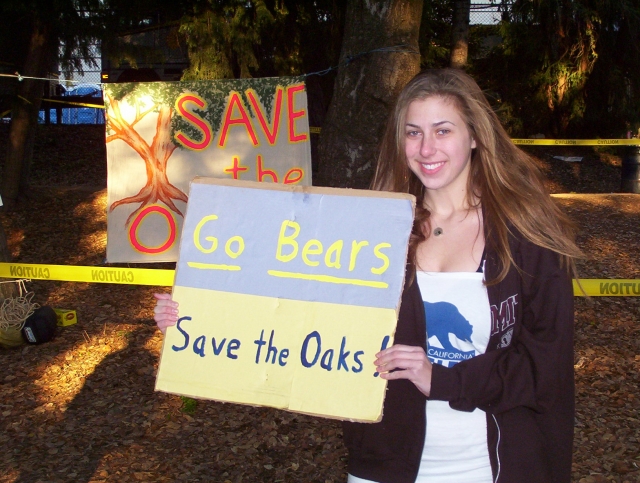 original image (1632x1232)
UC student with "Go Bears, Support the Oaks"
Add Your Comments
LATEST COMMENTS ABOUT THIS ARTICLE
Listed below are the latest comments about this post.
These comments are submitted anonymously by website visitors.