Add an Event
Newswire
Calendar
Features
Home
Donate
From the Open-Publishing Calendar
From the Open-Publishing Newswire
Indybay Feature
Publish to Newswire
Add an Event
Related Categories: International | Fault Lines
Shaking Uncontrollably: Bad Dictator, No iPod!
by Liam O'Donoghue (shakinguncontrollably [at] gmail.com)
Wednesday Nov 29th, 2006 5:11 PM
Since all the conventional measures (such as refusing to negotiate) have been exhausted by US diplomats in their struggle to punish Kim Jong-il for building nuclear weapons, Bush is now just trying to piss off the North Korean dictator. In an effort to “target the lifestyle” of Jong-il, Washington is pushing a trade ban that will prevent North Korea from importing some of Jong-il’s favorite stuff. 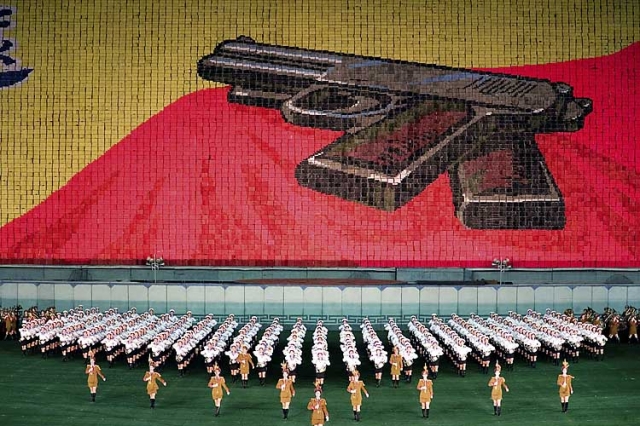 "While North Korea's people starve and suffer, there is simply no excuse for the regime to be splurging on cognac and cigars," Commerce Secretary Carlos M. Gutierrez said of the ban. OK, so the US has been playing “Mommy” for more than half a century now, dispensing spankings to the “bad” countries and gifts to “good” countries, but this latest escalation of global paternalism is simply laughable. Washington couldn’t stop Jong-il from building nuclear weapons, now they think they can keep him from getting the new fucking Playstation?!

Hmm. I just wonder if former Secretary of State Madeleine Albright is going to ask Jong-il to return the Michael Jordan-autographed basketball that she gave him in 2000. Uh-oh. I thought about it for too long. Now I’m “Shaking Uncontrollably” . . .

Kentucky Fried Spectacle: KFC’s iconic logo of Colonel Sanders’ face recently became the largest logo ever—and the first to be visible from space. The 87,500 square feet logo was created by tiles placed in the Nevada desert, near the super secret Area 51. Great. Now our planet looks like a fucking highway off ramp.

US Still Crabby About Communism: A U.S. congressional audit published last week revealed that U.S. funds intended to promote democracy in Cuba have been used to buy crab meat, cashmere sweaters, computer games and chocolates. More than $76 million was paid out to Cuban-American groups in Miami between 1996 and 2005 to support Cuban dissidents, independent journalists, academics and others. President Bush has proposed increasing spending on Cuba-related programs. “Democracy isn’t cheap,” he said. “Somebody needs to pay the dry-cleaning bills for all those cashmere sweaters. And no more Hershey’s—only the darkest Swiss chocolate for our Cuban allies! Capitalism, yeeeeee-ha!”

Celebrating Freedom by Banning Stuff: Pahrump, Nevada, a 30,000-person town outside of Las Vegas, recently passed a local law that makes it illegal to display a foreign flag—unless an American flag is flown above it. Violators face a $50 fine and 30 hours of community service. Michael Miraglia, the resident who proposed the ban, was mad about last May Day’s immigrant marches and told USA Today that he was very upset that "we had Mexican restaurants closed that day." Wow. Just to make sure that Mr. Miraglia never runs out of burritos again, I think everyone should mail him frozen burritos (400 N. Nevada Highway 160 Pahrump, NV 89060)or email him digital burritos at: m.m@netscape.com.

There Goes the ‘Hood: A homeowners association in southwestern Colorado is demanding that resident Lisa Jensen take down a peace-sign Christmas wreath decorating her house. Despite a $25 per day fine, she said she’s not going to take it down until after Christmas. Bob Kearns, president of the Loma Linda Homeowners Association in Pagosa Springs said that some residents believed that the peace sign was a symbol of Satan. He also argued, “Somebody could put up signs that say drop bombs on Iraq. If you let one go up you have to let them all go up.” Interesting… this guy is using the Domino Theory to justify Christmas decoration fascism.

Big Brother Hates Jaywalkers: After a Missouri couple was ticketed for jaywalking in front of a court house earlier this month, they decided to prove the hypocrisy of law enforcement officials by photographing all the cops who constantly jaywalk (and drive their Segway scooters) across the same street. A Greene County deputy quickly told them it was a violation of the Homeland Security Act for them to photograph government buildings and told them to stop, but the Sheriff soon confirmed that weren’t breaking any laws. The embarrassed deputy then furiously scooted away on his giant scooter.

Wishful Thinking: When President Bush visited Vietnam last week, the White House website featured a graphic of the Vietnamese flag—too bad they posted the flag that was 3 decades out of date. The White House mistakenly featured a flag that hasn’t been the official flag of Vietnam since South Vietnam surrendered to North Vietnam in 1975. A closer examination of the White House website reveals that not only did we win the Vietnam War, but that Iraq is a blossoming democracy, the federal government did a great job handling Hurricane Katrina victims, and that Bush was never buddies with Kenneth Lay.

YouTube vs. LAPD: A few months ago a video of two LAPD cops choking and repeatedly punching an alleged gang member surfaced, but following a brief investigation, a Superior Court commissioner concluded that the conduct was “more than reasonable.” Activist group Cop Watch LA then posted the clip on You Tube, prompting the FBI to step into the investigation following an outpouring of online outrage. The LAPD responded by complaining, “Stupid YouTube. Sure, ‘Peanut Butter Jelly Time’ is hilarious, but how are we supposed to really kick ass with all these damn cell phone cameras? Can’t you people just go back to watching “Cops” on Fox?”

I gotta run, but there are lots of great events coming up in San Francisco this week. If you’re interested in CIA torture programs, the role of independent media in social justice movements, Oaxaca, or just going to a really awesome party on Friday night, hit me up and I’ll send you the details.