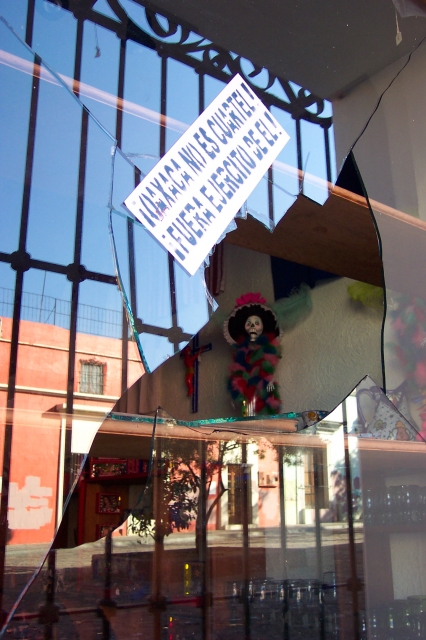 original image (1440x2160)
The targeted property destruction that marked Saturday night's battle touched the tourism sector as well as representatives of the government. The sticker on the window reads: 'Oaxaca is no army base! Army out of Oaxaca!'
§mega bus
by danielsan Monday Nov 27th, 2006 6:09 PM 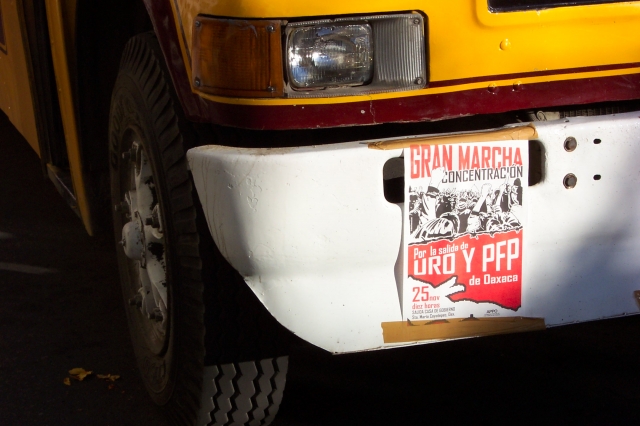 original image (2160x1440)
The 7th MegaMarch made its way from the Casa de Gobierno in Santa Maria Coyotepec outside of the city center, passing the airport and arriving at the PFP lines with the stated intention of surrounding the military for forty-eight hours. Early on APPO leadership and Radio Universidad were concerned with infiltration and provocation within the march.
§frida presente!
by danielsan Monday Nov 27th, 2006 6:09 PM 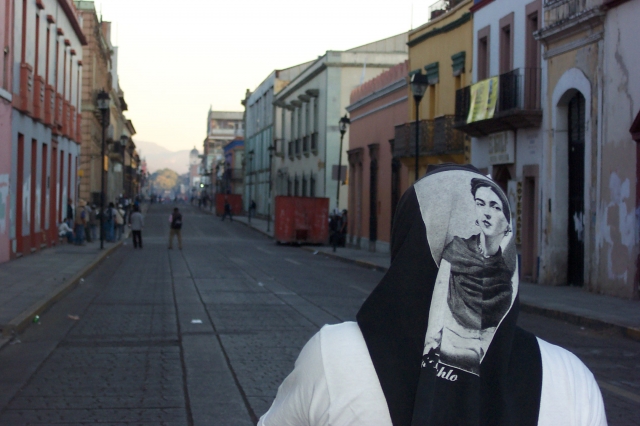 original image (2160x1440)
The street battle started soon after at several of the intersections where PFP set up their own barricades with dumpsters and barbed wire.
§gas
by danielsan Monday Nov 27th, 2006 6:09 PM 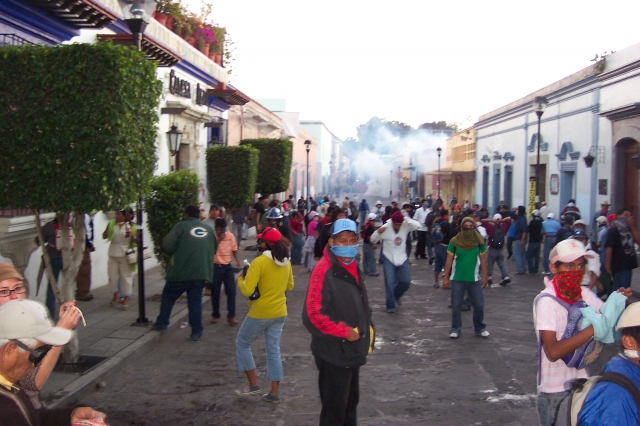 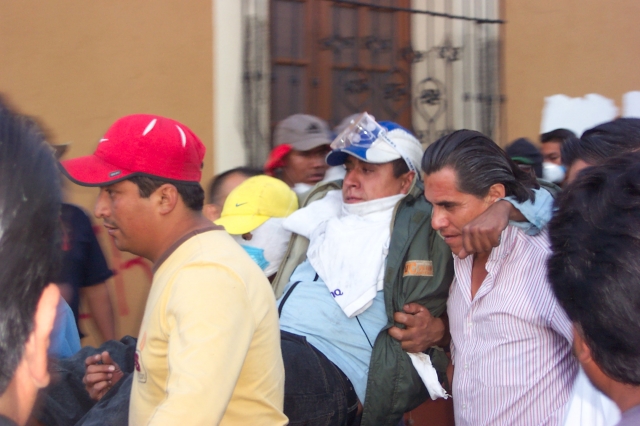 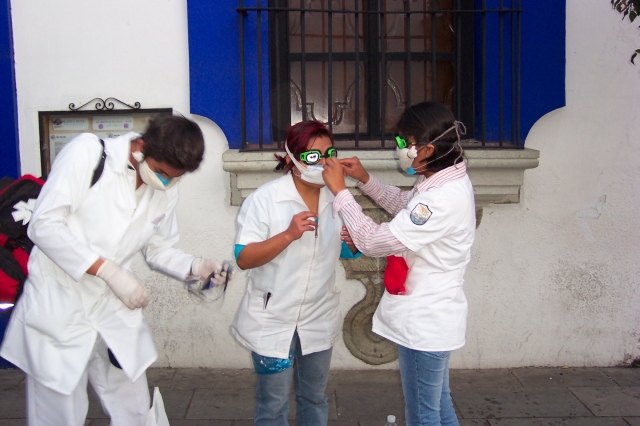 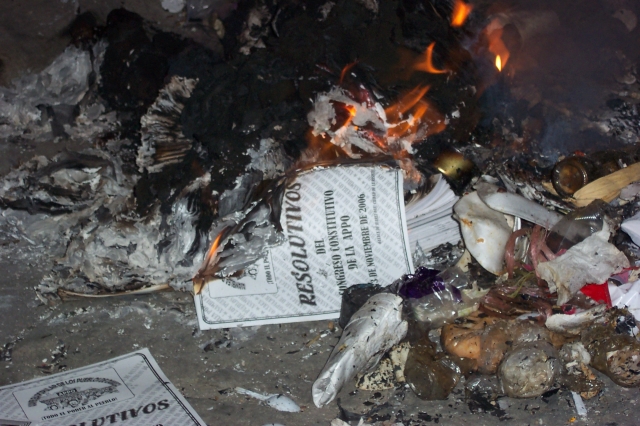 original image (2160x1440)
APPO had been distributing the results of the Congress held over the 10-12 of November; Saturday night they became fuel for the fires as more direct action-oriented Oaxacans attempted to hold off the PFP street by street, intersection by intersection.
§clinica alternativa
by danielsan Monday Nov 27th, 2006 6:09 PM 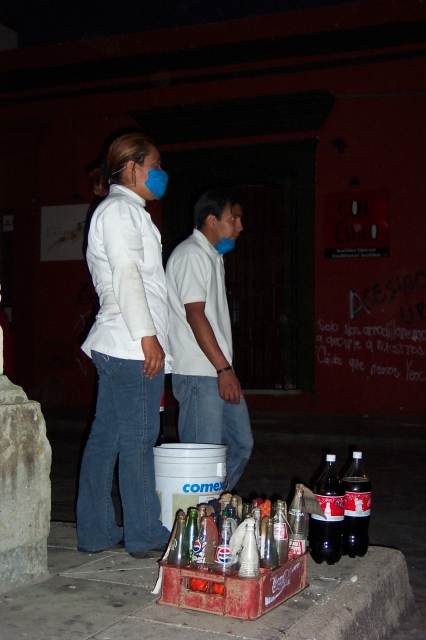 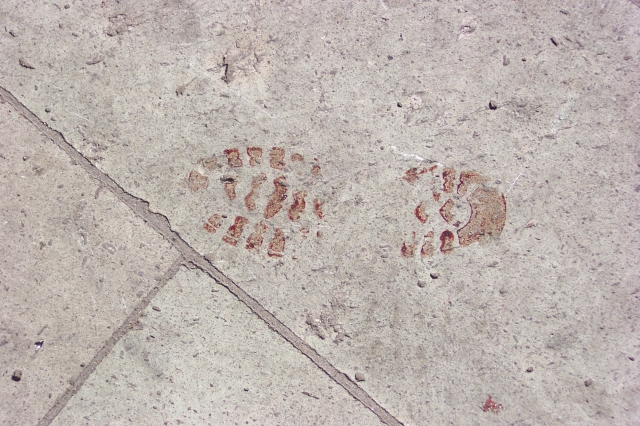 original image (2160x1440)
The next morning, the evidence was on the streets: military boots made footprints in pools of blood outside of a University building near Santo Domingo. A handprint nearby suggests this was quite a violent assault. One headline of the daily paper 'Noticias' read 'Washing the Blood Off the Streets' and was accompanied by a photo of the high powered pressure washers that snaked through Oaxaca City Sunday morning, along with lots of work crews who removed all evidence of what happened Saturday night,...
except for the still-lingering smell of teargas.
§visit oaxaca incendio
by danielsan Monday Nov 27th, 2006 6:09 PM 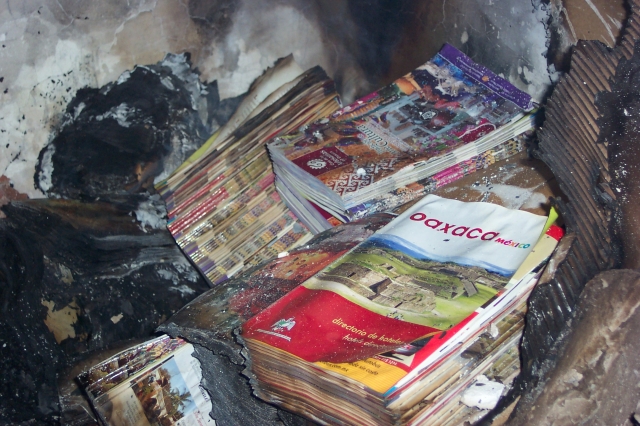 original image (2160x1440)
The offices of the Association of Hotels and Motels were burned Saturday night, along with many other buildings related to the state government, big business, tourism, a grocery store chain with ties to ex governor Murat (Pítico), and others. Fires also engulfed the offices of oft-visible APPO member Flavio Sosa, the Servicio de Administración Tributaria, and others in what appear to be fires set by PRIista loyalists.
Add Your Comments
Support Independent Media
We are 100% volunteer and depend on your participation to sustain our efforts!