On October 23, 2006, the administration of UC Santa Cruz spent tens of thousands of dollars bussing in at least three dozen police officers (from UCLA, UC Berkeley, UCSC and possibly UCSF) to guard a Graduate & Professional School Fair from the student population. The plan worked magnificently - a solid steel fence was erected outside the fair (located at College 8), with cops surrounding the entire perimeter. Riot helmets sat on a nearby table, and half a dozen high-profile administrators stood ready for action. Within hours, the building had been transformed into a fortress, impenetrable to the hordes of violent, black-clad anarchists. Except, there was one thing the administrators hadn't planned for... there was no protest at all! 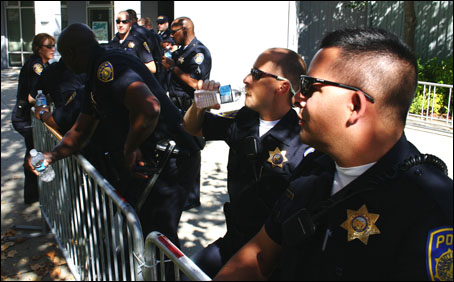 This was the mentality of UCSC's increasingly-paranoid administration. There would be one military recruiter at this Graduate & Professional School Fair, and, having recently witnessed the ruckus at the UC Regents protest (Oct. 18) less than a week earlier, the administration wrongly assumed that there would be a mass direct-action to remove the one military recruiter at the grad fair.

Thinking that a protest would occur if military recruiters visited campus is a natural assumption. In the past two years, UCSC has witnessed bi-annual mass actions where military recruiters have been kicked off by hundreds of students, acting in a nonviolent, yet direct manner to work towards a military-free campus. However, the police presence at October 23rd's grad fair wasn't just wishful thinking - it was outright paranoia, based on an absolute disconnect between UCSC's administration and its student body.

Why Was It Paranoia?

1) A protest was not planned! Big protests generally do not occur spontanously. You see flyers up. You receive emails. Word of mouth makes its way around. If a big protest is going to happen, you need a lot of people - so you have to publicize. When this publicizing happens is when administrators would naturally hear about it. UCSC's administration has moved beyond communication with the student body and beyond observing the very visible signs of an upcoming protest, and instead let paranoia take over.

2) The one military recruiter at the Oct. 23 fair was merely recruiting for some sort of military-sponsored medical school. This is, of course, a concern, as once you sign an 8 year contract for the military, they can do whatever the hell they want with you. But students on campus generally havn't protested medical military recruiters to the same degree that they've countered grunt-recruiters from the Army, Marines, etc. In fact, this exact situation happened last spring - a medical military recruiter visited campus and no major protest was held. The administration should have recognized this, or the other dozen signs that no protest would occur on October 23.

What Were the Repercussions of this Paranoia?

Unfortunately, the administration's miscalculation cost the university tens of thousands of dollars. The UC police officers brought from UCLA and UC Berkeley (and UCSF, if they were indeed there) were receiving time-and-a-half overtime pay, in addition to other associated costs. On April 11, 2006 there were half as many police officers at the counter-recruitment protest that kicked military recruiters off campus, and the pricetag for that was reported to be $10,000. So a rough estimate would put October 23rd's grad fair tab in the range of $20,000. For a university consistently cutting vital programs (such as foreign languages, writing, etc.), this type of unneccessary waste is scandalous. When I asked administrators, they refused to provide either the number of officers present, or the price tag for such a police presence.

The second major repercussion of administrators' paranoia is the significant impact the police intimidation caused to would-be grad fair atendees. According to a source inside the fair, it was near empty partially due to students' fear of crossing the police barricade to gain entry. As such, the source described the grad fair as a "disaster" in terms of attendance. In other words, the administration's paranoia over a possible protest drastically harmed the success of the event, and, as such, students' educational futures.

Unfortunately, this paranoia is not an isolated incident, but a scary, growing trend within UCSC's administration. In fact, this is the reason why I feel obligated to write about this incident (besides the fact that the Sentinel [who received calls from an angry community member denied access by administrators to visit a grad school recruiter] and City on a Hill Press have neglected to mentioned this gross waste of taxpayer money). If this was just a one-time mistake on behalf of UCSC administrators, I would be more forgiving, but October 23rd's grad fair miscalculation was just the latest in a wave of paranoia engulfing the administration.

1) On April 11, 2006, the administration thought a 'spontanous Tent city' would erupt at a counter-recruitment protest on campus. It didn't occur to them that Students Against War wasn't involved with Tent University (spring 2005) or that there is any difference between student activists on campus. Funny enough, the administration actually brought two tents to the protest that were eventually 'collectivized' to cover sit-in participants from the pouring rain.

2) In meetings, administrators have consistently blamed 'off-campus,' 'black-clad,' 'hooded,' 'white,' 'anarchists' for coming on campus and turning protests sour. At other times they've tried to blame the union, AFSCME (primarily composed of low-paid Latino workers), of indoctrinating students. Why can't they grasp that there is, in fact, a mass of undergrad Slugs willing to take independent, direct action in the pursuit of socio-economic justice and demilitarization?

3) On May Day, 2006, administrators thought that chaos would ensue and the campus would be ungovernable. They were shocked when only 300 people showed up at the base of campus before marching downtown to meet up with others who had marched from the Flats.

These are just a few of the many incidents. They've become a part of activist-humor on campus, but I wanted to share them with the rest of the public. It's well known that administrators troll student listserves, and have gone as far as sending an informant into an activist workshop for the sole purpose of reporting the proceedings to administrators (I found this out by a top-ranking member of the faculty senate - see: http://www.indybay.org/newsitems/2006/02/09/42132.php). Yet even with administrative spying (which we do not know the extent of), they still feel the need to waste tens of thousands of dollars bringing in outside police to soak up the sunny Santa Cruz weather while standing around for hours.

For a while, student activsts were relatively safe from receiving administrative discipline, partially due to the fact that the Pentagon spying scandal and the Michelle Malkin death threats turned us into victims in the eyes of the national media. But as administrative paranoia increases, so does their attempts to wrongly penalize activists. News has recently come out showing that the administration is now trying to suspend or expell well-known student activist Alette Kendrick for her involvement in the UC Regents protest on October 18. It doesn't concern them that Alette was racially targeted and brutally assaulted by police on that day, or that almost a dozen students were pepper-sprayed directly in the eyes without warning. All the administrators, with their paranoid fear of an ungovernable university, care about is making an example out of Alette - kicking her out of school as a way of finally getting some peace and quiet at UCSC. I'm afraid that, yet again, they're deeply mistaken. The more paranoia and punitive they get, the more the UCSC community will fight back.
§Ready for (In)Action
by josh sonnenfeld 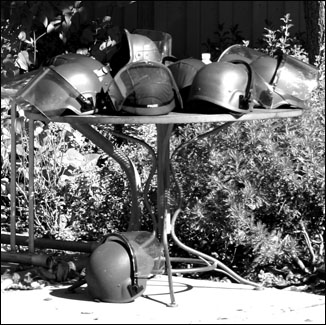 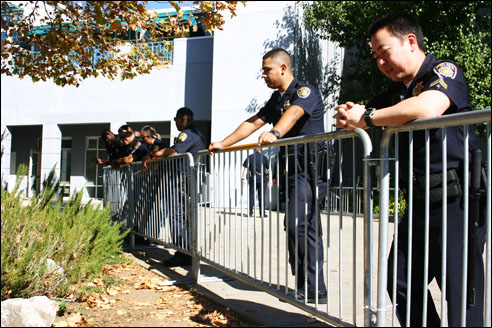 §How Do I Get In?
by josh sonnenfeld 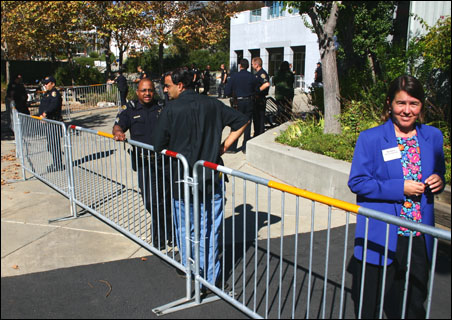 The entrance was just to the right of the anxiously smiling woman in the blue. She was out there encouraging students to attend... and passing out flyers intimidating students so that they don't disturb 'business as usual.' The man to her left, talking to the police officer, is the Assistant Chancellor, just hired last year from outside UCSC.
§Name That Administrator
by josh sonnenfeld 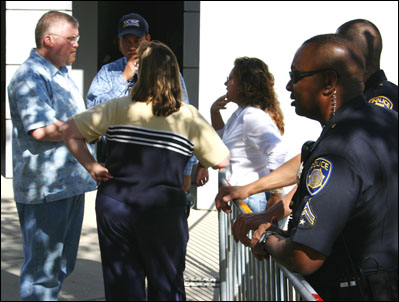 Alma Sifuentes, in white on the right, is in charge of Student Affairs. Can you name the other administrators? How 'bout how much the university is paying for them to be there.. per hour? The "Demonstration (err.. I mean 'emergency') Response Team" strikes again!
§Smile
by josh sonnenfeld 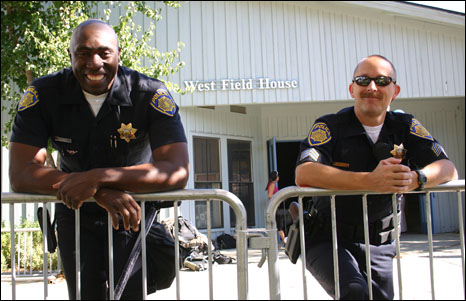 Two cops from UCLA. The one on the left likes to read Deborah Tannen books (with titles like, 'I only say this because I love you'), while the one on the right loves the Food Network. Sounds good to me! I had thought these guys were surprisingly nice compared to UCSC, UCSF, and UC Berkeley cops that frequent protests 'round these parts. At least... that was 'til I found out about the tasering incident at UCLA...
§'We'll Give You a Workshop on Civil Disobedience'...
by josh sonnenfeld 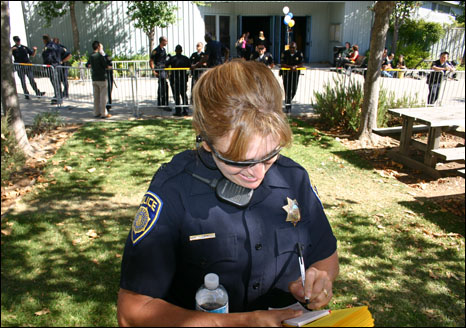 This police officer, Nancy Carroll from UCSC, walked up to me, said, "you're Josh Sonnenfeld, right," slightly creeping me out. She later offered to give 'us' a workshop on civil disobedience. The idea: 'you kids can get arrested if you want, but just don't interfer with the event!' In other words, 'make a statement, but don't fuck with business as usual.' She initially walked up to give me one of the intimidation flyers and to note that she was in charge of the day's event.
§Flyer
by josh sonnenfeld 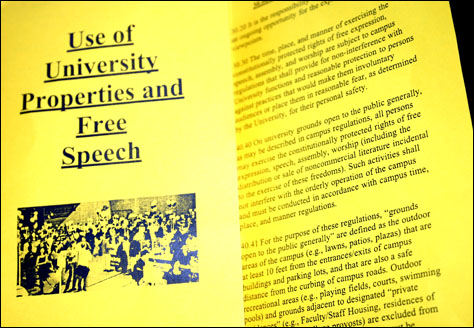 Look at the picture on the cover of the brochure. At first glance I thought it was a protest. Curious to see if it was one of my photos, I looked closely, only to see that it wasn't a protest at all - it was a shot from a job fair. The message was clear to me: this brochure wasn't about protests at all, it was about keeping 'university' functions running without a hitch.
§Flyer
by josh sonnenfeld 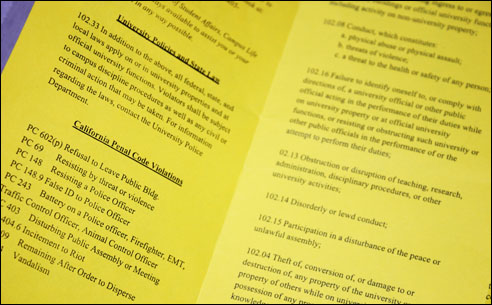 Read what's in the flyer. All it is is a huge listing of every possible code or rule that could be violated within a protest. Effectively, what you get is a picture that if you so much as hold a picket sign you'll be disciplined. No... that's not intimidating at all...
Add Your Comments
Latest Comments
Listed below are the latest comments about this post.
These comments are submitted anonymously by website visitors.
TITLE
AUTHOR
DATE
failed response
Senior@ucsc
Totally Zen - Sometimes The Best Action Is Non-Action!
junya
The inside was even a bigger joke...
Danny H.
Wow. Their spies must be really incompetent.
William Scott
The UCLA Cop Reads Indymedia Too
josh
trying to show off in front of the guys
(hee hee)
Support Independent Media
We are 100% volunteer and depend on your participation to sustain our efforts!