by Carol Brouillet (cbrouillet [at] igc.org)
Finally, the best new 9-11 documentary is being screened in San Francisco! The venue has changed. This is the film to bring the whole family to see, that crosses all boundaries, telling the story from the point of view of the families who forced a Commission on a reluctant White House, only to be betrayed by the Commission, itself. 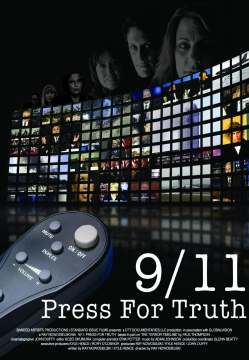 This film really deserves a major theatrical release, particularly in San Francisco, but so far it has been premiered in large theaters in Oakland and Palo Alto, on short notice between the anniversary events and the election. The film is one to wake up those who thought the 9/11 Commission was bipartisan and thorough or who believe that there really is a “War on Terrorism” and not massive war profiteering, extension of the American Empire, and lining the coffers of the new “Surveillance Industry” moguls.

The film is a compelling personal look at the victim’s families and their struggle for the truth and accountability. This is a highly produced introduction to the events of 9/11 (9/11- 101 For Beginners). Democrat or Republican, all those who suffered from the attack and the consequences can learn from the transformative experience of the families brave enough to force a Commission upon a very reluctant White House, and who witnessed up close and personal their betrayal by a Commission that failed to acknowledge, address or answer the vast majority of their questions.

It is heartening to see them challenge and defeat Henry Kissinger, who resigned his position as chairman, because he didn’t want to answer their demands for financial disclosure. Heartbreaking is their defeat when they tried to get Philip Zelikow removed from his powerful position as Executive Director of the Commission. Zelikow, who co-authored a book with Condoleezza ’s conflict, was also an author of the “Pre-Emptive War Doctrine,”whose special interest was public myths which have a lasting effect upon populations. More and more, people are beginning to recognize the fictional quality of the 9/11 Report.

The hero of the film, Paul Thompson, who created the online masterpiece, the Complete 9/11 Timeline, and a book entitled The Terror Timeline, published by Harper Collins (2004), connects all the dots, found by the mainstream press into coherent order which paints a very different story from the one touted by the official narrative. The film focuses on mainly one aspect, a history of Al Qaeda, Pakistan’s ISI, the money man behind 9/11, his links to top government officials, and the curious escape of Al Qaeda from Afghanistan under the nose of the US government. The film raises more questions than it answers. It also shows the important role of the press and citizen activism to pressure the press, and the government, if we are to get truth, and some accountability. When the film premiered on September 7, 2006, Paul Thompson, Producer Kyle Hence, and family members held a press conference in DC demanding a genuine investigation of 9/11.

The politicians are still kicking and screaming, resisting citizen pressure to impeach and to investigate the current Administration. They could be holding off until they feel a bit more secure in their power, but they do need a push, shove, lots of encouragement from informed, active citizens, who will not let them pull the wool over their eyes, and continue on the disastrous course embarked upon in the wake of 9/11. 9/11 Press for Truth helps to shine light on what was truly “a crime” not an act of war, which merits a real investigation, not a cover-up, and demands that the criminals responsible be held accountable.

Ardent 9/11 truth activists have distributed lots of flyers and put up posters all over San Francisco about tomorrow’s showing. Please note that the venue has been changed. The film will be shown at 7:30 pm, at 584 Market Street, Suite 907 at 2nd Street, San Francisco. A $2 donation is requested. No one is ever turned away for lack of funds. 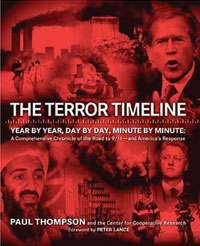 Full title: The Terror Timeline: Year by Year, Day by Day, Minute by Minute: A Comprehensive Chronicle of the Road to 9/11--and America's Response
Add Your Comments
Latest Comments
Listed below are the latest comments about this post.
These comments are submitted anonymously by website visitors.
TITLE
AUTHOR
DATE
The Northern California 9-11 Truth Alliance Apologizes
Carol Brouillet
Variety Screening Room at the Hobart Bldg, 582 Market Street
Carol Brouillet
Variety Screening Room in Hobart Building
Carol Brouillet
Support Independent Media
We are 100% volunteer and depend on your participation to sustain our efforts!