by tristan
The APPO Constitutional Congress runs from November 10-12. Here is a report of the first day. 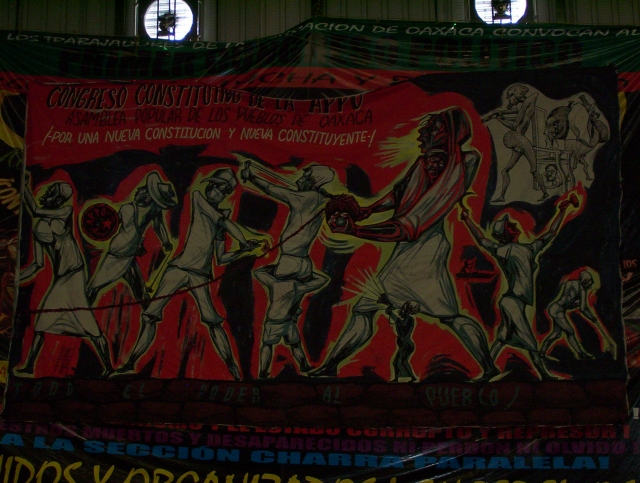 original image (1632x1232)
From November 10-12 the APPO held its Contitutional Congres. Its goal was to choose a leadership and fortify the direction of the organization in the most democratic way. The congress was held in an indoor stadium. The Provisional Diectors sat at a table at the front. Then there were hundreds of people in chairs and the rest in the bleachers. Along the walls were banners of APPO in action. They showed young people with molotovs, women stringing out barbed wire, people with slingshots and bandanas over theor faces or playing the guitar, a woman with a baby facing the riot cops.

The APPO organization was formed very quickly. On May 22 the 70,000 teachers in Oaxaca went on strike. They soon set up an encampment in the central square. Oaxaca has a long history of struggle and many groups supported the teachers. The people marched in solidarity with the teachers on June second and seventh in the first two Mega marches. On June 14, at 4:00 am the teachers were evected violently by the police and one teacher was killed. People responded and on June 16th the Mega March grew to over 500,000 people. The APPO (Popular Assembly of the Oaxacan People) began to form union by union and town by town. On the 27th of June the Provisional Directors were chosen and they have led APPO until now. The Provisional Directors were about 22 people, they were mostly men but also some women. The APPO was a coalition of groups with many demands but their central demand was that the Governor, Ulises Ruiz Ortiz (URO) step down. He was seen as so oppresive and as part of the corrupt PRI Party that he had to go befote any negociations could even begin.

On June 14 teachers rallied and at 8:00 am they retook the central square in a battle that left the police defeated. The local government and the police were driven out of the city. Barricades were built to protest the encampment in the central square. Barricades were set up all over the city and soon spread to other towns in the region. The barricades stopped traffic from 10:00 pm to 4:00 am. It showed the power of the people. The main strategy was “ungovernability.” People choose to let governments rule them. In this case the people of Oaxaca chose not to let the government rule. Many other actions were taken. Wemen took over radio and tv stations and government buildings in Oaxaca City and mant towns were occupied. The Mega Marcha on July 28th had pover one million people. APPO support in Oaxaca is tremendous.

The congreso started with speaches by the Provisional Directors and was constantly interupted by the enthusiastic delegates chanting, “The people united-will always be victorious,” and “He has fallen-he has fallen-Ulises has fallen.”

It was announced that there were 821 delegates, from the 350 groups that make up APPO. Twenty were from the teachers union (Section 22), 403 were from indiginous communities and collective land (ejidos), 268 were from civil society groups and unions and 132 were from neighborhoods and barricadas. There were also 69 members of the press and 72 invited guests.

Speaker after speaker got up to announce their support or announce actions taken on behalf of APPO. Indiginous people from six towns in Veracruz state are now blockeng the highways. There is right now a mass march in mexico City of thousands of people. There are strikes in Guerrero State, especially in Acapulco. One speaker announced the support of the leftist PRD party but the cheers were reduced by half. People have a mistrust of parties and hierachical leaderships.

There were chants of “Zapata vive-La lucha sigue,” and applause for everything. People were excited and happy to be organizing their future. Everyone raised their fist and sang the song Venceremos (We will win). The press was asked to leave and APPO got down to serious business.

The assembly divided up into the seven regions of Oaxaca. In the large echoing room it was very loud and chaotic. Each group had to pick three representatives. Some groups were small and chose quickly. The Valle Central group (Oaxaca city, the coreo f APPO) had so many people that they had to divide into sub groups. There was tremendous shouting, animation and participation. Hands were raised, there was clapping and arguing. People stood on chairs and shouted, people on the edges straind to listen and there were hundreds of small conversations. Everyone was trying to figure out how to organize in the best and most participative way. “Barricadas over here and Neighborhoods over there.” “No. No. Neighborhoods and Barricadas is the same.” Those people went back to one group. Older indiginous women with strips of orange cloth braided into their hair and young guys in Coca Cola t-shirts, men in cowboy hats and teachers in sports jackets or dressy skirts all debated together.

Shouts filled the hall. Votes were taken by delegates holding up their badges. Only tose with the ornge badges of the delegates could vote, while guests and the organizing comite could still speak.

Some groups had decided but Neighborhoods and Barricadas still had not. Women with spakling earings and guys with pierced eyebrows wistled, waved their hands and leaned in with others to listen. “Who is from Santa Lucia?” Everyone was talking to everyone, expressing their opinion. “Do we agree?” The rest of Valle Central was ready but Neighborhoods and Barricades still hadn`t picked a representative.

Mixteca was still deciding as well. Many men in cowboy hats listend much more quietly than those from Valle Central. Finally they chose their three representatives. Valle Central still had to choose. The sub-groups had made their nominations and these people got up on the main table. Valle Central delegates handed them theri delegates badge as a vote. Women in white embroidered blouses handed their badges to one of the six candidates. Finally the results were announced and the three chosen.

David from the barricades was elected second delegate fro Valle Central. A woman giggled, “The guy from Barricades won. I won for the first time in my life.” She laughed and everyone was in good spirits.

A member of the provisional Directors picked up the microphone, “Whatever happens in Oaxaca is going to have its repercussions in all the other states, in the whole country.” He handed the mic to another, “Valle Central- Neighborhoods and Barricades took a while but what we are doing has never been done before and we are going to make mistakes…but after all of this we have the movement.” The newly elected representatives would be dived into organizers, secretaries, vice-presients and the president. These roles were only for the Contitutional Congress.

Each delegate to the congress got three votes for the candites. The votes had to be for three different people. People wildly cheered for the delegates from their region. One group cheered for David. “He is from the barricades.” People debated wich regions to vote for. Which would be toughest in the comming struggle. The delegates raised their badges to vote candidate by candidate. When it came to David the cards went up and people chanted, “Strong, strong, barricades, barricades…” David was elected First Secretary.

The representatives who got the most votes from each region came up. “How many votes do we get,” shouted one woman. “Three votes.” Then it was decided that two was better. Delegates held up their badges to vote for president and the six vice presidents. The Sierra got a lot of votes, “La Sierra, those people rose up in arms (in the 70´s).” Some delegates used both their votes for other regions to escape regionalism. There were whistles and shouts and a recount had to be done realy quickly.

The members of the Provisional Directors got up and waved good bye. Their job was done and a new group was in charge of running the conference that would choose the more permanent leaders. There were cheering and chants of “Unity, unity…” and “Shoulder to shoulder-Elbow to elbow-The APPO-The APPO-We are all the APPO.”

The newly elected president picked up the mic, “We have just participated in an inherently democratic process.” Then a woman in a red skirt waved her hand frantically from the side. The president held out the mic and she ran up. “We can´t just have regions represented but women and men.” It was true all of the represntatives had been men. There was cheering from women and many men. The assembly burst into a tumult. There was shouting and arguing all over. The new leaders were a little confused. A man ran up to the mic and made a proposal. “We should add two women to the Organizers.” “No, No” it was shouted down by women. The women were frantically runing to the mic and men and menbers of the old leadership all wanted to speak. “Proposals, proposals,” called the president. Small groups were shouting and discussing and grappling with this problem and trying to find a solution. One of the vice-presidents took the mic, “We have made a mistake.” Another vice-president took the mic, “We are a democratic organizarion and if we make a decision we are able to change it, right?” Finally the tumult calmed down. Adding two women to the bottom was seem by most as totally inadequate but the leadership was only for the congress. So, it was decided to proceed with the leadership as it was but to make shure that women were well represented when the new leadership would be chosen in two day. Everyone seemed happy. Everyone had been willing to compromise and everyones voice had been heard and taken into what would be done.

At this time a carravan of 200 people from Las Abejas organization in from Chiapas arrived at a church in Oaxaca. They brought with them five tons of food for the APPO and came in solidarity. Everyone cheered and spoke about how they were massacred by paramilitaries while celebrating mass in 1997. The new president asked if people wanted to go welcome them. The response was tepid. There was so much work to do in the congress. A vice president proposed that the Provisional Directors be sent instead. There was great applause and it was agreed.

David, as new First Secretary read a long document of the history of APPO. It pointed out the destructive nature of Plan Puebla Panama, NAFTA, the FTAA, capitalism and other forces. It poited out how these same things supported Governor URO and how he in turn promoted them. It talked about how people protesting them were put down and slowly formed into the APPO.

The conference went on late into the night and will continue for three more days. Although there is a structure of president etc. it was clear that APPO is run by the people at the base and that the leadership structure is mostly to get things organized. The directly democratic and participatory nature of the event were great to see. People really can organize to run things themselves. When the issue of women not being represented came up almost everyone was willing to get rid of the selection process that had just taken hours in favor of a fairer one. The respect and belief in each other was amazing to see. 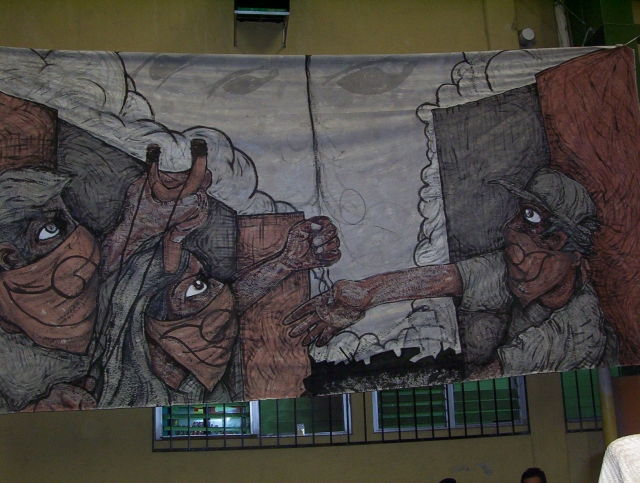 original image (1632x1232)
Banner of masked APPO members with the indigenous speak or communicate simbol on their bandanas.
§
by tristan 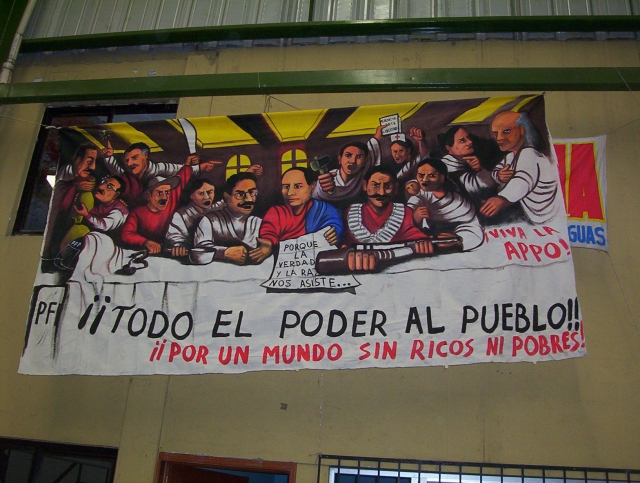 original image (1632x1232)
"All power to the people!"
"For a world without rich or poor!"
Revolutionaries from mexico´s past.
§
by tristan 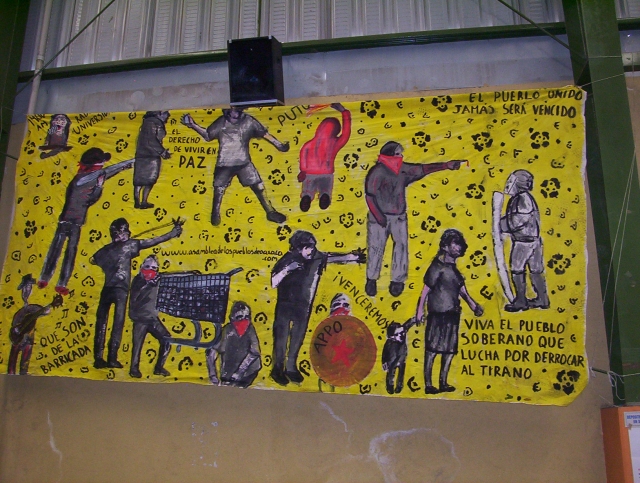 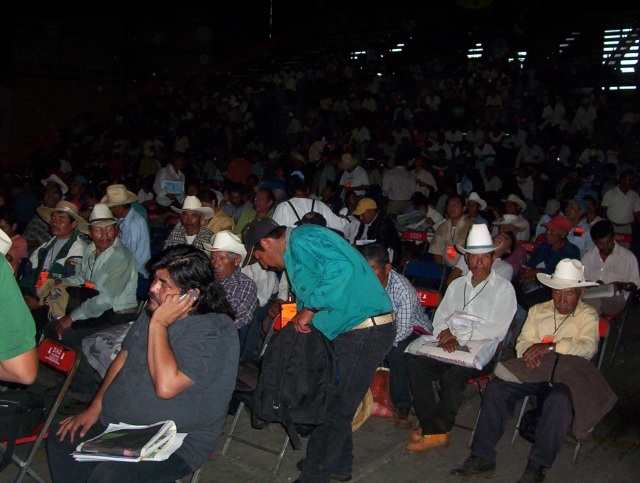 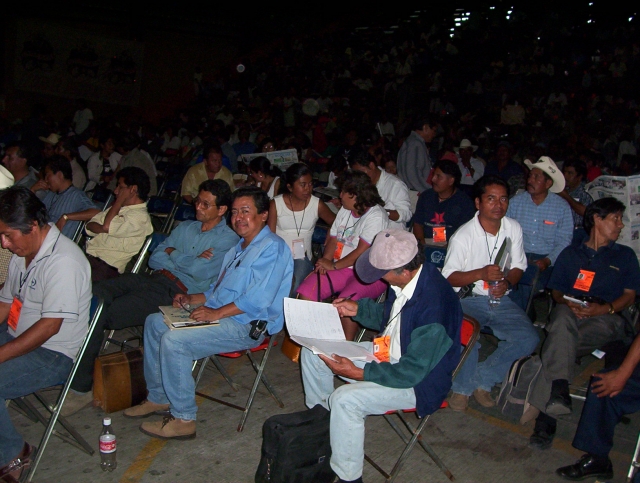 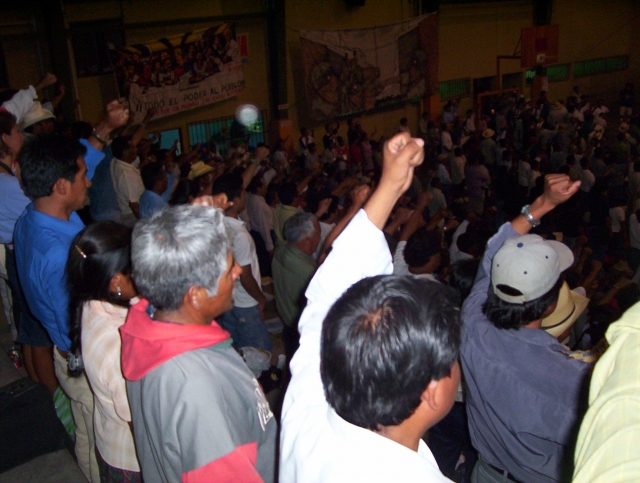 original image (1632x1232)
Singing: Venceremos (We will win)
Add Your Comments
Support Independent Media
We are 100% volunteer and depend on your participation to sustain our efforts!