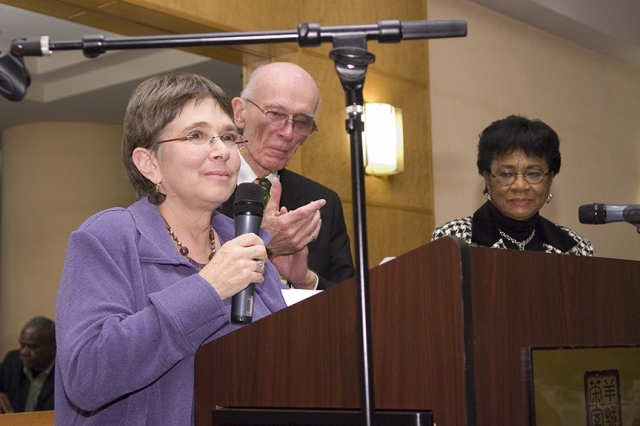 original image (864x576)
On Thursday, November 9th, Northern California Chapter of the Society of Professional Journalists held their annual banquet. Of the many honors that were bestowed on people, arguably the most prestigious, Journalist of the Year, went to imprisoned video documentarian, Josh Wolf, along with other grand jury subpoena resisters, San Francisco Chronicle sports writers, Lance Williams and Mark Fainaru-Wada.

Wolf's mother, teacher Liz Wolf-Spada, accepted the award on behalf of her son. Wolf, who had been imprisoned, released and then re-imprisoned, has served a total of 82 days in a federal penitentiary for refusing to turn over his unedited video footage of a July 2005 San Francisco protest where a police car was damaged and police officers and protesters were injured. Wolf remains in federal prison in Dublin, California.

San Francisco Police, who presumably had few leads in their investigation of the incident, turned the case over to the federal government, who in turn opened a grand jury investigation of the case. Wolf, who had videotaped some of the protest and sold edited footage to local television stations, was subpoened by the federal grand jury to turn over his unedited video coverage. Wolf refused, citing journalist privilege. He argued that if he complied, he would become a defacto spy for the government and would lose his ability to cover controversial events.

Under California law, Wolf would have been protected under state press shield laws. However, in a federal investigation, Wolf has no such protection since no specific federal shield laws exist.

After being taken into custody in San Francisco on August 1, 2006, Wolf was released after a judge deemed that he was not a threat to society. However, another set of judges reviewed his case, deemed him to be in contempt of court and sent him back to prison. One of the reasons cited as to why Wolf didn't "qualify" as a journalist was because one judge claimed that he didn't make his living as a "professional journalist," despite the obvious fact that he freelanced as a video journalist and worked for a community college television station.

Honorees Fainaru-Wada and Williams have yet to be taken into custody. Both reporters collaborated on an article series and a book which exposed the extent of the use of steroids in professional sports. The federal government has been investigating the same thing, but apparently had less success than Fainaru-Wada and Williams, and few willing to talk to investigators.

The fact that Fainaru-Wada and Williams have been threatened with imprisonment for their noncooperation, yet have not yet been taken into custody might have much to do with the fact that they are both reporters for the San Francisco Chronicle. If they are taken into custody, the federal government risks unleashing the wrath of not only the San Francisco Chronicle writers, but newspaper writers across the country who have been closely watching the case .

Wolf, for all of the people he's helped through his activist brand of journalism, seems to find himself very alone at this point in his case. Many newspapers, most of which are owned by conservative publishers, haven't reported on Wolf's plight and a few have even tried to paint him in a bad light --- as if attacking a "left" reporter proves their patriotism and guarantees them job security in an ever-increasing world of independent and internet-based media.

Wolf's honor by the SPJ is not only a moral victory for Wolf, but also a strategic one. The acknowledgment of Wolf as "Journalist of the Year” sends a clear signal to the government, especially judges: journalists accept Josh Wolf and his battle for freedom of the press as their own.

Wolf has also received other critical acclaim lately. On Sunday, November 4, Wolf was honored in San Francisco at the first ever Vloggy Awards, an awards dinner honoring Internet video bloggers. Wolf was given the People's Choice Award for Best Male Vlogger and the Judges’ Award for the Most Controversial Vlog. "Vlogging" is a relatively new media phenomenon, combining the form of an Internet "blog" (web log) with digital video, and one that is quickly catching on. Wolf's awards were an important acknowledgment from peers in his own medium. 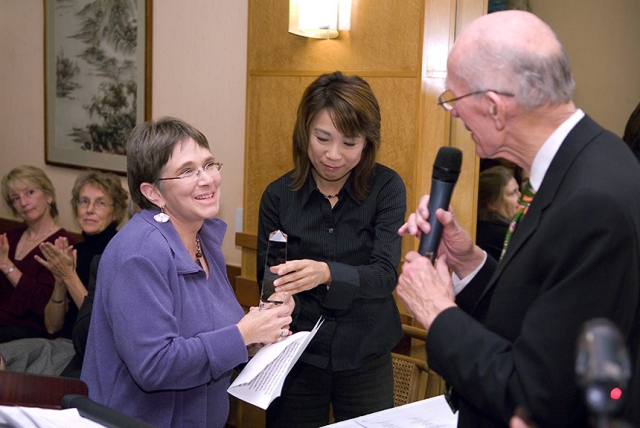 original image (860x576)
Liz Wolf-Spada gets presented with the Journalist of the Year award from Northern California Society for Professional Journalists, for her son Josh Wolf, who is imprisoned for refusing to turn over outtakes from a video of a demonstration. Photo by Scott Braley
§SPJ dinner
by hiraeth Friday Nov 10th, 2006 7:39 PM 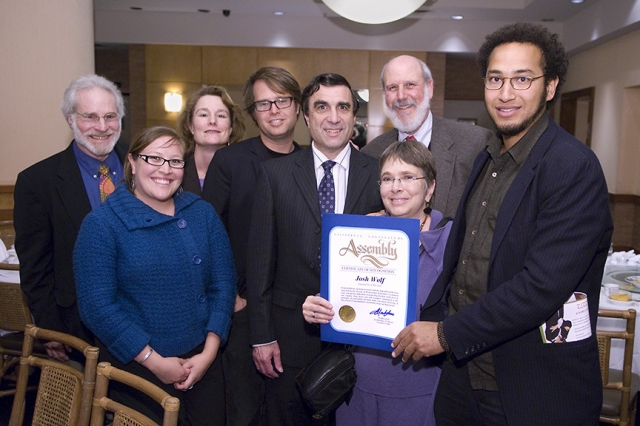 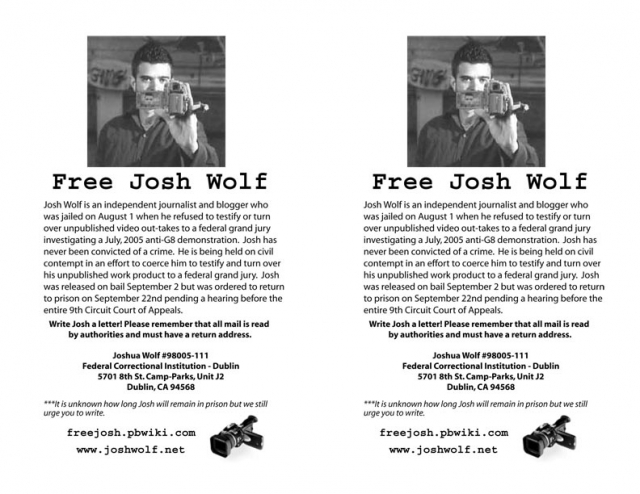 original image (792x612)
Here is side one of two-sided flyer that provides basic info. about Josh and his case. 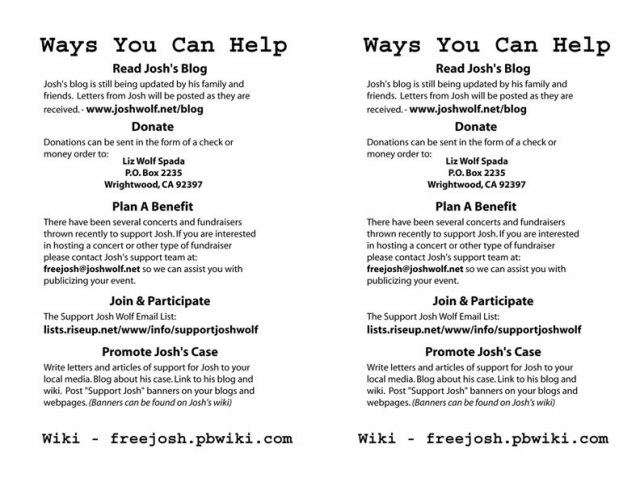 original image (792x612)
Here is side two of a two-sided flyer that provides basic info. about Josh and his case.