We are all in this Together

by Mike Rhodes (MikeRhodes [at] Comcast.net)
Rev. Larry Arce, CEO of Fresno Rescue Mission held a Press Conference today. The theme was WE ARE ALL IN THIS TOGETHER. With him were representatives from the Fresno Police Department, the Poverello House, and the City of Clovis. Meanwhile, outside of the mission, the homeless were being threatened with arrest, having their shelters destroyed, and drugs were pouring into the neighborhood. What is wrong with this picture? 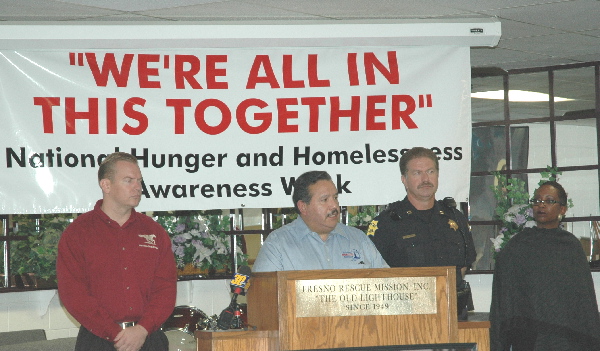 We are all in this Together
By Mike Rhodes

Larry Arce, CEO of the Fresno Rescue Mission held a press conference today to announce the National Hunger and Homelessness Awareness Week - November 12 - 18. The theme of the press conference was We Are All in this Together. Standing at the podium with Arce was Captain Greg Garner with the Fresno Police Department, Nathan Magsig the mayor of Clovis, and Doreen Eley the administrative director of the Poverello House. There were no homeless people at the podium.

The audience included representatives from faith based groups, social service groups who work with the homeless, and staff representing local elected officials. Each of the speakers told the audience and media why working on homeless issues is important and how great the need is to work together. No questions were allowed after the presentation. Following the press conference I spoke with Bob Brown, the pastor of ministry operations at the Rescue Mission. He said "there are homeless people and street people." I asked him to explain the difference. Bob said "homeless people are on the street because of a misfortune like losing a job or having an illness." He said these people want to get off the streets and will succeed in the programs they (the Fresno Rescue Mission) provide. He said "street people want to be on the street. They are there because of drugs, alcoholism, and mental illness."

I also got a chance to talk with Captain Greg Garner of the Fresno Police Department. I asked Garner if the Fresno Police Department was using the San Joaquin Valley Railroad as a proxy to attack the homeless. See the story about these most recent attacks on the homeless here. Garner said that he asked the railroad to wait until the court resolves the issue before proceeding. "But, if they arrest people for trespassing on their property, we will accept the arrests." Garner said "the courts have ordered the City of Fresno to handle these situations in a specific way, but the court order does not prevent the railroad from taking action." Garner says the railroad has the power of arrest and is prepared to use it to remove people from their property. I asked him if it was just a coincidence that the railroad put up no trespassing signs about a week after the Temporary Restraining Order against the city was issued. People have lived on railroad property for three years with no problems and now they are threatening to arrest them. Garner just shrugged.

Out on the street, after the press conference, I ran into Randy Johnson who is one of the plaintiffs in the legal action against the City of Fresno. For more information about the lawsuit, go here. Randy said that he had been cited for riding his bicycle yesterday. "I had six officers chase me down because I didn’t have a reflector on my bike," he said. Randy says the officers handcuffed him and gave him a citation. He thinks this harassment was retaliation for his participation in the lawsuit.

Gino also thinks the reason he is being harassed and forced to move from his shelter near the railroad tracks is because of the lawsuit. "I know these guys that work for the railroad. They come by every week or so and say hi. They have never asked me to leave. But, right after the lawsuit, they came out here and posted no trespassing signs. Yesterday, the folks from the railroad, backed up by a dozen police officers, came out and told me to leave." Gino thinks the police are using the railroad as a proxy to continue the attacks on the homeless.

Rev Floyd Harris was on Santa Clara street today (across from the Poverello House). He was talking with some of the people who live in the area. Harris called me and said "there are a lot of expensive cars driving into this area and dropping off drugs." Harris said that he observed the drug dealing and that the people he was talking to confirmed what was going on. "How come the cops don’t see this? It is almost like they want to let the drugs into the area. The drugs confuse people and they are not motivated to change the conditions they are living in. Why do the police have time to chase people like Randy down for not having a reflector on his bike and allow all of these drugs into the area?"

Want to find out more?

The next hearing in Federal Court will be on Thursday, November 16 at 9 AM. This will be at the Federal Courthouse, 2500 Tulare Street, 7th floor. It is expected that several homeless people, who have had their property taken by city work crews, will testify.

END_OF_DOCUMENT_TOKEN_TO_BE_REPLACED
§Head to Toe in the Mission
by Mike Rhodes 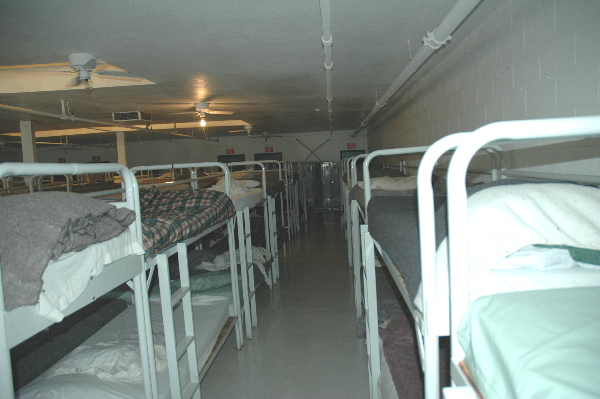 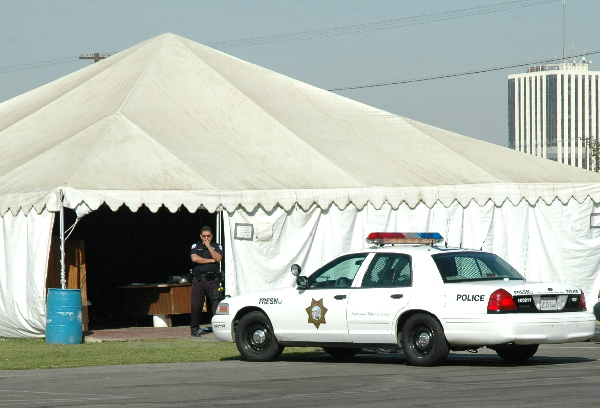 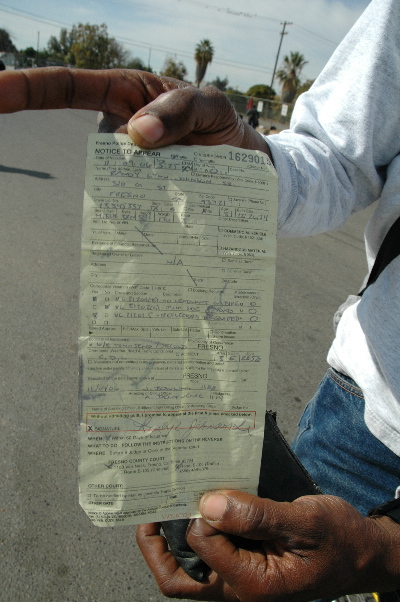 If Randy Johnson was a white man driving an expensive car and dropping off drugs at Santa Clara and G street he would probably not be bothered. But, since he is black, a part of a lawsuit against the City of Fresno to defend his civil rights, and was missing a reflector on his bicycle, he gets busted.
Add Your Comments
Support Independent Media
We are 100% volunteer and depend on your participation to sustain our efforts!