Homeless People told to Move On

by Mike Rhodes (MikeRhodes [at] Comcast.net)
The City of Fresno and the Fresno Police Department appear to be using railroad workers as a proxy by which to continue harassing the homeless. More photos and the story is below. 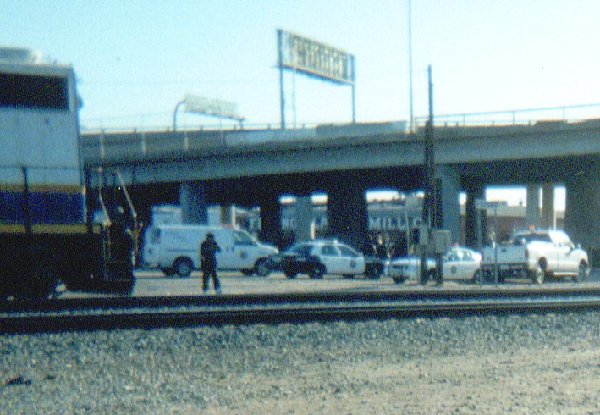 Homeless People told to Move On
By Mike Rhodes

The homeless in downtown Fresno are under attack again. On Monday (November 6), a BNSF railway agent named A.J. (Jean) Daly stopped by Charles and Steve’s shelter. Charles and Steve are homeless. You can see a picture of that tent here: http://www.indybay.org/newsitems/2006/11/05/18326764.php . According to Charles, the agent left her business card. On the back, it said “you need to move to a different location - away from any railroad tracks. If you do not - you may be arrested. Thank you. 11/6/06.” Yesterday, a railroad agent returned and demanded that Steve immediately move the shelter. Charles was not around at the time. Steve had a camera, given to him by the Community Alliance newspaper, which he intended to use to document the situation. The railroad agent told Steve that if he took a photo, he would arrest him.

This morning the Fresno Police Department (FPD) and agents from the San Joaquin Valley railroad arrived at the encampment near San Benito and H street. They told numerous homeless people that they had to move their shelters off railroad land or they would be arrested. Gino, who lives near the railroad, told me “these guys from the railroad have been coming by here talking to me for three years. They have never told me to move.” For photos and a short story about Gino, see: http://www.indybay.org/newsitems/2006/10/26/18323549.php . Gino said there were about a dozen FPD officers accompanying the railroad workers. He said “the city got the railroad to kick us out because of the lawsuit.” The lawsuit, which was filed in Federal court last month, has stopped the city from taking and immediately destroying homeless peoples property. For more information about the lawsuit see: http://www.indybay.org/newsitems/2006/10/17/18321050.php and http://www.indybay.org/newsitems/2006/11/08/18328081.php .

Denny, who is homeless and lives near Van Ness avenue in downtown Fresno, told me this afternoon that he was told by city workers today that he would no longer be able to sleep in his shelter. Denny wondered what the city was going to do and where he was going to sleep? Gino had a similar question. “Where are we going to go? If the railroad kicks me out of here and I move to the vacant land over there (he points to a field a short distance away) then will the owner or the police tell me to move on?” 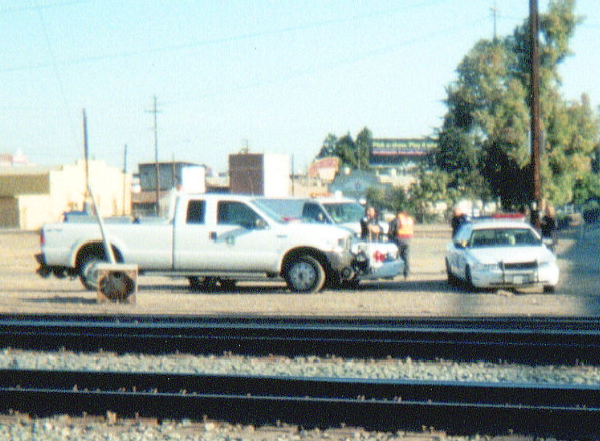 The City of Fresno has a Temporary Restraining Order preventing them from attacking the homeless. So, what do they do to get around this court order? They get the railroads to do their dirty work for them
§Fresno Police and Railroad Workers Threaten Homeless
by Mike Rhodes 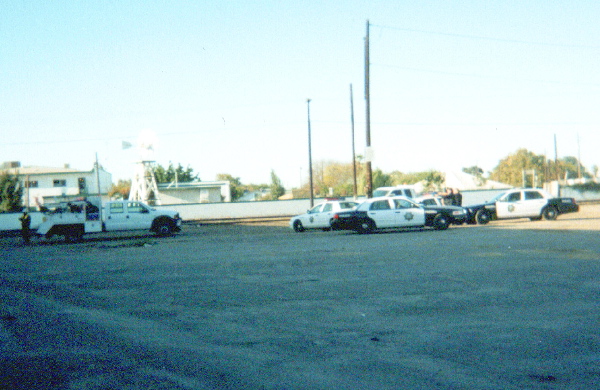 This photo shows the Fresno Police Department meeting up with workers from the San Joaquin Valley Railroad. Together they threatened people in the encampment, near the tracks, to move by tomorrow morning (Friday, November 10). 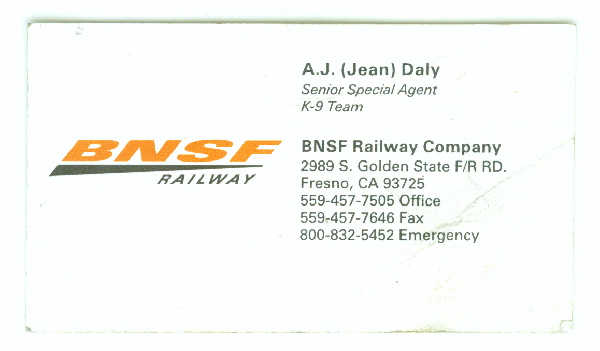 This is the Business Card that was left on Charles and Steve’s shelter. K-9 Team?

§The Note
by Mike Rhodes 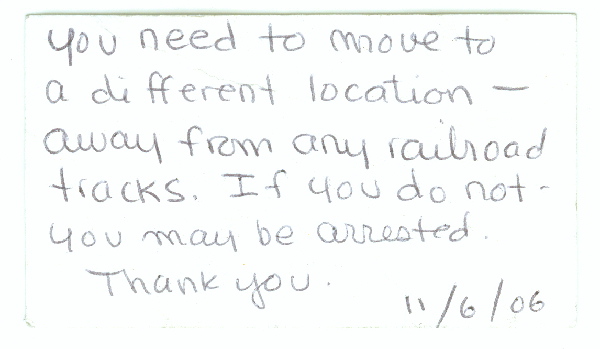 Add Your Comments
Comments (Hide Comments)
§BNSF K-9 units
by Anonyomous
Looks like the K-9 units are for intimidation purposes. Here's an article on peace officer Jean Daly and her award winning K-9 "Ike". I wonder how many units they have trolling around looking for homeless people to harass.
END_OF_DOCUMENT_TOKEN_TO_BE_REPLACED
Add a Comment
§BNSF Reputation
by anonymous also
The Burlington Northern Santa Fe RR has a notorious reputation for being especially brutal to those who happen upon their property - dating all the way back to the depression. In this instance, I am curious because the RR property that Officer Jean and Ike are working may not actually be BNSF Property. It may belong to either the Union Pacific or San Joaquin Valley RR. Though she may indeed have peace officer status, she may be outside of scope of authority. If she is and the incident described here took place outside of BNSF property, then there would be reason to believe that she is acting on behalf of Fresno PD.
Add a Comment
Support Independent Media
We are 100% volunteer and depend on your participation to sustain our efforts!