Homeless Stand Up for Their Rights in Court

by Mike Rhodes (MikeRhodes [at] Comcast.net)
The homeless in Fresno are tired of being victims. They are in court to defend their rights and stop City of Fresno from destroying their encampments. The story below is about the hearing in Federal Court held on Tuesday, November 7. 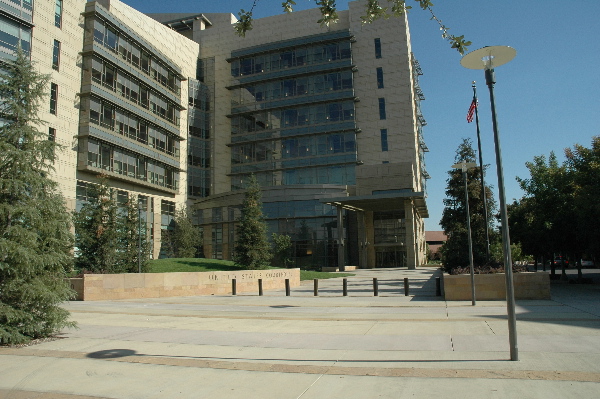 Homeless Stand Up for Their Rights in Court
By Mike Rhodes

A hearing was held in Federal Court yesterday to stop the City of Fresno from taking and immediately destroying homeless people’s property. Attorney’s for the homeless are seeking a preliminary injunction to stop the city from conducting sweeps in downtown Fresno, which result in the loss of homeless people’s possessions. Property taken has included blankets, tents, clothing, ID, medicine, and even an urn containing one persons grandchild. There is a Temporary Restraining Order in place, but a preliminary injunction is being sought to prevent these raids from occurring until a lawsuit can be resolved.

The lawsuit claims City of Fresno is violating the constitutional rights of homeless people by destroying their property. The complaint was filed by the Lawyers’ Committee for Civil Rights, the ACLU of Northern California and the law firm of Heller Ehrman, LLP and is being heard by judge Oliver Wanger.

The courtroom, filled with homeless and their allies, heard three witnesses on Tuesday. The first witness was Liza Apper, who works with the Saint Benedict Catholic Worker. Apper has been a homeless advocate for many years and has put herself in front of bulldozers to protect homeless peoples property. She spoke about the May 25, 2006 incident when she stopped a bulldozer from destroying a tent. The police ordered Apper to move, but she held her ground. The bulldozer eventually moved around her and destroyed other shelters. After the threat from the bulldozer was gone, Apper said that a man came out of the tent. He had been asleep and unaware of the danger. For more information about this incident, see:
http://www.indybay.org/newsitems/2006/05/25/18253011.php

Apper said that Fresno was exceptionally hostile to homeless people and on a national scale is probably one of the most unfriendly cities. City of Fresno attorney James Betts objected repeatedly and attempted to limit Apper’s testimony. Apper said Fresno was in the top ten of US cities who are hostile to the homeless. She estimated there were 4 - 8,000 homeless on the streets of Fresno and that there are very few shelters where a homeless person can find a bed. Apper said the Fresno Rescue Mission (for men only) has between 120 - 150 beds, the Poverello House has 22 tool sheds that sleep two people each, and that the Naomi House (for women only) has 24 beds.

Connell described the period leading up to the raid on the homeless encampment by saying that “the Poverello House was getting complaints, there was verbal harassment of people coming to visit our facility, sanitation problems, and that there were needles and syringes on the ground.” In late 2003 or early 2004 Captain Gardner with the Fresno Police Department called a meeting of social service groups. The purpose of the meeting was to come up with a solution to the Santa Clara encampment. Connell said that Captain Gardner told the group he would not clear the street until someone stepped forward and set up additional housing for the homeless. According to testimony, Connell was the only person at the meeting to agree to set up more shelter space. The agreement was to use a piece of land, recently purchased by the Poverello House, and set up a tent city. This has turned into the “Village of Hope” that has 44 beds in 22 tool sheds.

Connell described the Village of Hope as a self governed community that provides for its own security, has its own city council, and members are voted in and out. He complained that the occupancy rate over the summer of 2006 was only about 50-60%. He then used that figure to argue that any homeless person that wants a bed has one available. Connell said the reason homeless people are not staying at the Poverello House is because the Village of Hope has “minimal standards.” For example, residents of the Village of Hope are not allowed to bring in drugs or alcohol. Connell did not mention that these tool sheds get extremely hot in the summer or that residents must leave by 7:30 AM and can’t come back until the evening. Other problems cited at the Village of Hope are random searches of peoples property and the similarity to the TV show survivor - where people who are not liked are voted out of the community by the elite.

The issue of how many homeless are in Fresno came up several times. Connell challenged the findings of the Continuum of Care report which concluded that about 1% of the population in Fresno was homeless at any given time. The 1% figure is a national average. Some people think, because of economic conditions, the number of homeless in Fresno is higher - perhaps as high as 2%. But, Connell argued that the number was far less than the 4 - 8,000 figure cited in the Continuum of Care report. “I don’t know how many homeless there are in Fresno. It could be 200 or 2 million.”

Connell said that he does not believe any homeless people have ever had their property taken without receiving a notice that a “clean up” was about to take place. He said that the Poverello House has written, printed, and posted many of the notices preceding the raids. But, when asked if he has ever seen a notice posted in a homeless encampment he said that he “no.”

When asked how often he has been in the homeless encampments around the Poverello House, Connell said that he has walked through them maybe six times. Connell has worked at the Poverello House 16 years and has only walked outside where the encampments (and the homeless) are located, an estimated 6 times. The homeless and their allies in the courtroom gasped at the admission. Connell also said he was unaware of current activities in the area because he has just returned from a vacation in Europe.

The level of hostility Connell has against the homeless who refuse to subject themselves to the discipline of his Village of Hope became more apparent as he was challenged on his perception of whether or not the homeless are being treated in a compassionate manner by the police. Connell said “Captain Garner has shown compassion and patience in his work with the homeless. Officer Wallace is exceptionally compassionate.” In testimony before the court, Connell said it is compassionate to throw away homeless peoples property if they are not present when it is destroyed. Michael Risher, an attorney with the ACLU, asked Connell if it would be compassionate to throw away a bicycle that was leaning up against a fence. “Yes” was the reply. How about a shopping cart with someone’s property inside? “Yes.” Connell drew the line at destroying somebody’s property if it was clearly identifiable and could be returned to the owner. He said the Poverello House has a program that allows homeless people to store property for 30 days.

Rev. Floyd Harris was the next witness. Rev. Harris had participated in a clean up of the homeless encampment over the summer. See: http://www.indybay.org/newsitems/2006/08/05/18294991.php . He described how it was possible to clean up the homeless encampment without destroying property. Rev. Harris said he went to the encampment the day before the clean up to talk with the residents. The homeless agreed to help and when Harris brought a youth group they all worked together on the clean up. Harris disputed Jim Connell’s description of the encampments as being covered with human feces and having needles and syringes all over the ground. Harris said “I’ve seen more needles north of Shields avenue than south of Shields.” Harris said he and his co-workers did not have to wear bio-hazzard suits to conduct the clean up. Harris concluded, “I wanted to show the youth group that came out that day not to be afraid of the homeless. We are all one community.”

Liza Apper returned to the stand and described the June 22 attack on the homeless encampment. Photos were shown of her struggling with officer Rey Wallace over the possession of a shopping cart. On that day, the police and sanitation had concluded their clean up on the west side of E street (south of Ventura) and the homeless had removed what they could and put it on the East side of E street. In a surprise move, the police directed city sanitation workers to start throwing entire tents and shopping carts into the garbage truck and crushing them. What was being destroyed was obviously the property that the homeless people sought to save from destruction. For more details about this incident, see: http://www.indybay.org/newsitems/2006/06/22/18281976.php .

Apper next described the August 26 raid which ended with the city constructing a fence around the homeless encampment to keep people from returning. Photos and information about that incident can be seen here: http://www.indybay.org/newsitems/2006/08/26/18301032.php

The hearing will be continued on Thursday, November 16 at 9 AM. This will be at the Federal Courthouse, 2500 Tulare Street, 7th floor. It is expected that several homeless people, who have had their property taken by city work crews, will testify.

###
END_OF_DOCUMENT_TOKEN_TO_BE_REPLACED
Add Your Comments
Comments (Hide Comments)
§Will there be a benefit in Fresno for teh Homeless
by ann G
Thank you for your journalism on the attack on the Homeless. Thank you to those who are Homeless who are brave and courageous to tell their story. Thank you to the advocates who work to battle the evil in men's heart's who currently run the city of Fresno. Thank you to the activists who work with the homeless. Only for the grace of God have we not become Homeless.
*** I hope a big benefit can be organized that will bring in celebraties who will give their name and money so this story can be exposed and the evil action by the city officials can be exposed. Mayor Autry, and Chief Dyer like to have their weekly prayer meetings, and several articles have been written about their "Christianity" but it takes more then saying you are a Christian and praying. "They will know were are Christians by are deeds". The city officials have shown us their form or Christianity by their deeds and it is not Christlike at all.

I hope a group can organize a large benefit.
Add a Comment
Support Independent Media
We are 100% volunteer and depend on your participation to sustain our efforts!