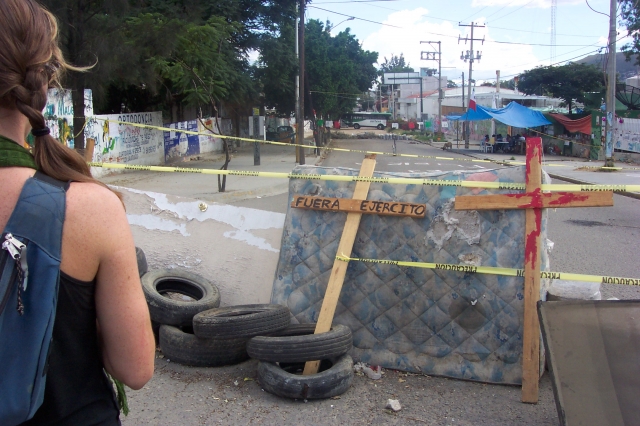 original image (2160x1440)
The story of the takeover of Canal 9, the state-run TV station taken over by a group of women on August 1st. They maintained a blockade of the station for almost three months, until the PFP arrived last week and removed them. We talked to two teachers (and one of their daughters) outside the station a couple weeks ago about the takeover and the situation for teachers in Oaxaca. It was an interesting conversation--of particular note is the file 'Is APPO Feminist?' Appartently 'feminism' is a bad word in México, just like it is in the states. While the teacher discussed the efforts of APPO members to support gender equality, she explicitly states that it is *not* a feminist movement because it doesn't exclude men. I guess it all depends on how we're socialized to define the word. We also discussed the role of the Catholic Church in the movement and heard from a teenage student about the lessons being learned in the streets.

Teacher 2: They're always saying well, 'it's just the teachers.' And then, after the megamarches, they'd say 'it's just a small group.' And then, they called us a few radicals. But it's only natural, with this government and all governments, to say this about those who oppose them. To oppose a government like this one, tyrannical, repressive, [A1: Son of Hitler...laughter], exploitative. That will always be their weapon: to say 'they're extremists, they're radicals, they're leftists, even guerillas!
Q: It's a way to dismiss their critics...
Teacher 1: terrorists, too! Well, the only terrorist is the one up there (in the USA)].
Teacher 2: Yes, whomever disagrees with the policies of the USA are terrorists... so yes, governments label us too. I don't know what the goal is, but anyone who is in opposition, well they're a terrorist.
Teacher 1: So that's how it is, the situation.
Teacher 2: But you asked us how we feel as teachers--what is it that we visualize...
Q: Yes, what changes to the schools. The first goal is obviously the fall of URO, but after that, what's the ideal for Oaxaca's schools? What if the result of the negotiations was them asking, 'Well, what is it that you want?' It's kind of a dream, but what do you want for your schools?
Teacher 2: When we started out with the union struggle in 1980, our demands were financial: better pay, better treatment as professionals. But we started to recognize the needs of the towns we teach in, what the marginalized population lacks, so we started to make demands on behalf of the greater society, of the schools, kids, and towns where we teach. In the annual protests we've held since then this generated minimal demands, like better classrooms. There are schools where the kids sit on the dirt floor, or on tree stumps for chairs, where there aren't even the neccesary standards of hygiene or sanitation. So we started to demand more resources for education, for classroom construction, for school uniforms. So what's been done is we've achieved some of this. We got free school books for students of the secondaries. Oaxaca was the first state in Mexico to make this demand, and it was the teachers. Other states now recieve free schoolbooks, too. And then the social demands of the teachers kept going. We've demanded that the government prioritize education proportionately, because Mexico is a country that spends little on education. So us teachers who see the conditions in these towns--kids who don't have the minimum baseline met for health or food aren't going to be able to meet their educational potential either! Or participate in academic life. And in the same way the towns and villages don't have that minimum level of subsistance for a family, for the kids. And the teachers arrive without even a chalkboard! And then we come to the capital (Oaxaca City) to these offices and our schools are so far removed--for example my school is a three-day journey from the Capital. So a teacher who comes to the capital to ask for a chaulkboard, has to leave the school for three days to ask for some little thing. So where's the concern of the authorities for education when the schools lack basic resources? They put the money towards political campaigns, or PR campaigns, or tourism,... and to who's benefit? Who does tourism benefit? For the most part, big companies and investors. A small fraction goes to the community. It's a very serious situation of marginalization that the community confronts. That's why the teachers started to demand social change, in addition to school uniforms and school breakfasts and grants. And because of this the community gave more and more confidence to its teachers, since we started coming to their schools with more resources, with materials and uniforms and food. For us its been difficult, to confront this practice without seeing more of what's happening in the family. I don't think that we'd be teachers if we were satisfied with the four walls of the classroom.

...so everyone goes to the barricades. For example, there are signals if there's danger: as everyone already knows, there's the fireworks. Two is the alarm and with three the people come running. Or they ring the [church] bells, but only if the priests haven't been bought off. Some of them have taken down the church bells so that they can't be used as a signal. That's the level we've gotten to with this government. At the masses [a woman walks by, distracting the teacher, who misspeaks, laughter...] even the archbishop has blamed the teachers, saying that since we haven't returned to work the children are now vandals and drug addicts. Those are some issues to raise with the archbishop, to answer for it, for the members of the Catholic Church to realize, since the church is involved with the bad government. That's how power works.

People lose their fear, their inability to respond in some way to authority, to the government. In other words, it builds courage, internal courage, when you know that the people are dying, and you can't do anything to defend them. So from that comes courage, the will to struggle, to build up force, and the ideal to build a better world for everyone.

Q: It's clear that this movement has women in positions of leadership, on the part of the teachers, but with the structure of APPO, and the negotiations taking place [in DF], what do you think? Is this movement, this organization feminist? Is part of the change an uprising of women? Apart from change in the schools and change in the government, is [feminism] a part of this movement for social change?
Teacher 1: Well, so this group, the Coordinadora de Mujeres which is allied with APPO, is a group that supports and is supported by men. We're not talking about feminism, about being against machismo. No, for us it's about working together, coordinated, man and woman, so that we can win this struggle together. We don't separate ourselves from the men; this struggle is a social one that includes the men who sometimes surprise us. And we as women sometimes go along with things without analizing enough. But still sometimes in our union meetings we'll have a debate. But with the caravans headed to and from Mexico City DF--in the women's march that we put together--that was a difficult situation, risky, but we planned it and made it happen safely, with the help of some of the men who came along as security. And it was a success. And so no, this is not a feminist movement. We're working together. The proof is right here--there are men here [washing dishes in the kitchen outside Canal 9] helping us out. If we thought of this as a women's movement, then we'd be fighting with men in whom equality already exists, and who already open spaces for equality between women and men.

Teacher 2: Right now a lot of people are saying, "the kids are missing class." But what's more important: to lose your life and your liberty, or to miss class?
Q: What do you think that the children are learning right now, from what's happening even though there's no class?
Teacher 1: What's the message being sent? Well, I work with little kids. But even from preschool they ask the same questions, and they see the unrest amongst the adults. We think it's pretty universal amongst governments and states and countries; that they prioritize investment over education and health and food and such. But after this popular movement, I think you'll see lots of Oaxacas--with increasing awareness of the struggle especially amongst women. The community I teach in is only a half an hour from the city, but girls don't get the same support from their parents to keep going in school--for them the ideal is that they marry, and they marry young. In different areas further out, like at the coast they don't feel the same way, and in some places everyone has the same possibility, but here in the [central] valley parents feel like they've completed their kids' education at the end of the secondary and then they should get married, and the priority is for the boys to get an education and even us as teachers, we say they have to prepare them to fight for their rights as women, their human rights, that should be valued. Some of the youth who are conscious of what's happening and who join in the marches and activities. That's how it is.

Q: So do you miss class? [to a youth sitting with her mother at the table]
Student: No. [laughter 'better that she's a student'] Well right now there are a lot of students who are working within APPO, participating in the marches, and at the University, there are a lot of youth who don't necessarily go to school there, and there are other students who are joining in the struggle, and who support the call to get rid of our repressor, and who are spending time in the Zocalo. And for me, the group I belong to, the Estudiantes Luchadores de las Normales ('Fighters and Future Teachers'), what we want to do is support the Normales (schools that prepare teachers), but one of the problems is that there aren't enough spaces. There are only seventy, and of those seventy, many are people who come with some recommendation, or who have money,... there are some who really passed their tests, but who can't stay because they can't pay. They don't have the resources. That's why we're in this same struggle, and why we support APPO in their call for the removal of URO who has oppressed the people. Q: So outside there's a banner, a drawing that says at the bottom: "Education for the child of the worker before for the child of the bourgious."
Student: Yes, it's a slogan, a chant. And it's also what we are asking for.
Q: And so your lessons--what are you learning right now?
Student: Well, we've been learning how to fight for freedom and for our beliefs! Like how we're occupying this place, everything they said. And we're learning that every time you find yourself with these ideas, these beliefs, you have to express them! And also that this is a just cause. This is what we're learning right now.
§Santo Domingo Video
by danielsan Wednesday Nov 8th, 2006 2:34 PM
Copy the code below to embed this movie into a web page:
Download Video (9.2MB) | Embed Video
Add Your Comments
Support Independent Media
We are 100% volunteer and depend on your participation to sustain our efforts!