Vote for Impeachment, Vote for 9-11 Truth

by Carol Brouillet
Grassroots activist, Congressional candidate, sets out to vote, and reflects on her campaign. 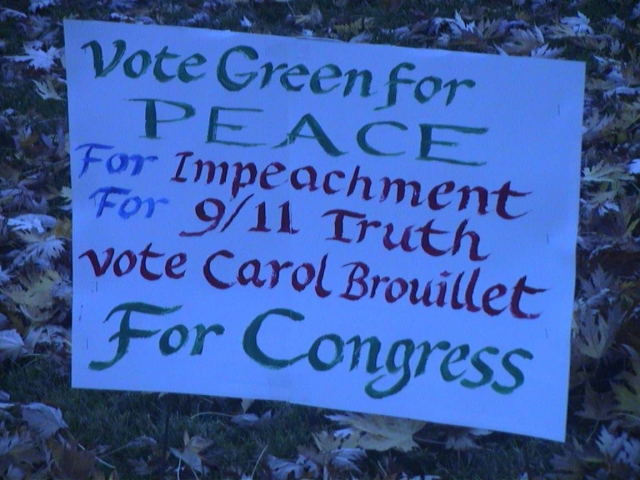 original image (1152x864)
I will bicycle to Juana Briones Elementary School to cast my vote in my first Congressional Race this morning. The Green Party and the Northern California 9-11 Truth Alliance encouraged me to run for office, my platform includes peace, 9-11 truth, impeachment, repeal of the Patriot Act, and ecological wisdom. The Green Party does not accept donations from corporations and, without a big money war chest, generally gets little attention from the press. The Palo Alto Daily and the Mercury News ignored the 14th Congressional District race completely, until yesterday when the Mercury News endorsed the incumbent.

I am not shocked by the media silence, having championed taboo topics such as 9-11 Truth and impeachment for many years. I have tried to go around the “gatekeepers of conventional wisdom” via the Internet, direct action, rallies, marches, educational events, art, films, and a weekly “listening project” in Downtown Palo Alto during the last five years. I produced two benefits and a film entitled “Behind Every Terrorist There is a Bush,” and organized the first San Francisco International Inquiry into 9/11, and have published and distributed over 6,000,000 Deception Dollars featuring websites that challenge the official narrative of 9-11. I also published an Election Deception Dollar whose websites question the 2004 presidential election and a Media Deception Dollar which includes the following quote by William Randolph Hearst:

“News is something that somebody wants suppressed. All the rest is advertising.”

My campaign faltered when my campaign manager suddenly quit last April. I suspect that he quit partially because of what happened when he organized a speaking engagement for me to speak at his old dorm at Stanford. Only two students came, and one, who asked permission to record me, interrupted my talk when I complained of Eshoo’s role in beefing up the Intelligence agencies and seeing John Negroponte, infamous for his role in developing Death Squads, take the helm of the new national agency. “Oh John would never do anything like that,” the student said. “He’s a nice guy, a good friend of mine.”

I have spent most of my time championing the 9-11 Truth movement, even helping to organize a conference and rally in Chicago, which broke the topic in the New York Times, which even published a photo of me in a subsequent article. Last month I organized a screening of the film 9-11 Press for Truth at Gunn High School with Paul Thompson and Peter Dale Scott, in hopes of exposing the 9/11 “Cover-Up Commission” and how top Al Qaeda operatives were working for the FBI, CIA, and the military and were assisted, trained and protected by the US government for well over a decade. The Stanford Daily did a cover story, but the rest of the press ignored the event.

I feels the race will reflect how well informed or uninformed the public is on 9/11 Truth and the need for impeachment. I believe “Impeachment is the best hope for the country. We have a responsibility to hold our government accountable for its crimes and to change its policies. Eshoo won’t touch impeachment and wants to expand Homeland Security. I think the 'war on terrorism' is a 'war of terrorism' against Americans and the world. Our best hope of putting an end to 'terrorism' is to stop funding, training, and assisting terrorists, and to stop waging illegal, immoral wars against other nations. I'd like to redirect humanity's resources towards healing, nurturing a peaceful world, where all people and life are respected."

I believe the truth will emerge, and that we will organize resistance to this government, before they can completely organize the repression of all dissent. I just wish we could raise consciousness more quickly, but it is happening organically, slowly and each of our actions, however small, will determine our future.

END_OF_DOCUMENT_TOKEN_TO_BE_REPLACED
Add Your Comments
Support Independent Media
We are 100% volunteer and depend on your participation to sustain our efforts!