Attacks on the Homeless Continue in Fresno

by Mike Rhodes (MikeRhodes [at] Comcast.net)
Charles Montgomery (photo below) shows where his shelter had been last week. On Wednesday, a bulldozer operator who would not identify who he worked for, came through and destroyed Charles and Steve’s shelter. Is this a violation of the Temporary Restraining Order issued in Federal Court last month? 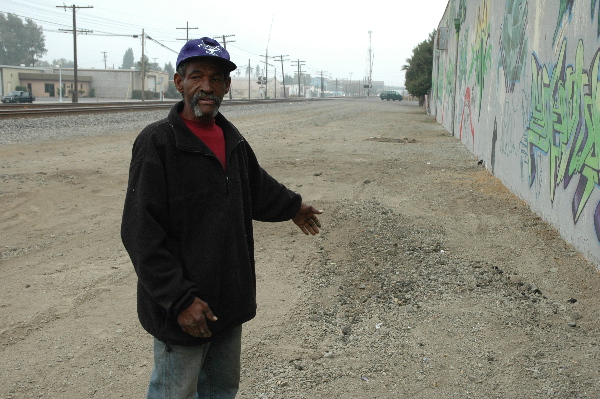 Attacks on the Homeless Continue in Fresno
By Mike Rhodes

On Wednesday, November 1 two homeless men were sleeping in their shelter in downtown Fresno when the bulldozer came. Charles, who has asthma, said “I woke us and started coughing from all of the dust.” Charles and his friend Steve knew something was wrong when they looked out and saw a bulldozer in front of them.

Charles said “I asked the guy (the machine operator) to stop. He told me he was doing this for his boss. . . so, I asked him who his boss was. He said he didn’t know, but that I would have to leave right away so he could do his job.” Charles and Steve said they received no warning that they were about to be forced out of their shelter and have all of their possessions destroyed. Steve said he had a family trunk in the shelter that contained irreplaceable items. The shelter and their possessions were put in a dumpster and large asphalt rocks were placed on top.

The experience Charles and Steve had is similar to what has happened to hundreds of other homeless people in Fresno. The only difference is - about two weeks ago a Federal Court issued a Temporary Restraining Order (TRO) to stop the City of Fresno from taking and destroying homeless peoples property. See: http://www.indybay.org/newsitems/2006/10/17/18321050.php .

Attorneys for the homeless are in the process of taking further declarations about the attacks which include bulldozing of shelters, taking and destroying of property, and other civil rights violations. There will be a hearing in Federal Court before judge Oliver Wanger at 9 AM on Tuesday, November 7. The purpose of this hearing is to get a preliminary injunction to stop the City of Fresno from taking and immediately destroying homeless peoples property. A hearing about the lawsuit is still several months away.

Charles and Steve moved to a new location after their shelter was destroyed. Steve said that “on Friday this woman drove up in a City of Fresno truck and told us we would have to move.” Their new tent is now set up near a railroad track just south of Ventura. “She told us that if we were not gone by Monday (November 6) the railroad people would come, arrest us, and take our stuff.”

New signs were posted by the railroad at a location where many of the homeless have moved to after the E street “clean up.” For more information about what happened on E street see: http://www.indybay.org/newsitems/2006/08/26/18301032.php . The new encampment, near San Benito and H street is under a freeway overpass and not far from the railroad tracks. When the signs were put up about a week ago, the residents were told that they too would be arrested and their property destroyed. Several homeless people told me they think the City of Fresno has pressured the railroad company to take over the job of harassing them. Geno (see: http://www.indybay.org/newsitems/2006/10/26/18323549.php ) said “we’ve never had any trouble with the railroad people before. They would come by and say hi every week or so. They never told us to leave or anything like that.”
END_OF_DOCUMENT_TOKEN_TO_BE_REPLACED
§Charles and the Dumpster
by Mike Rhodes 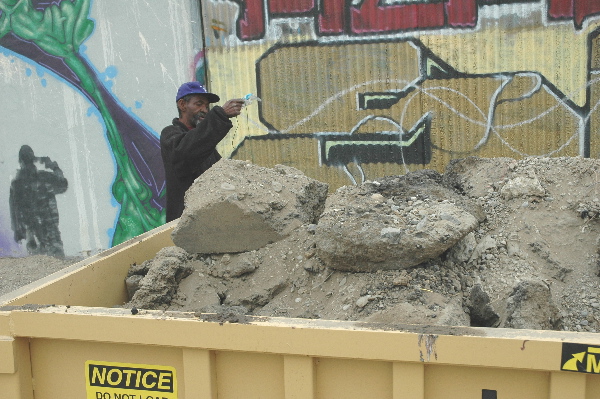 Charles and Steve’s possessions were put in the bottom of this dumpster. The operator of the bulldozer then put these rocks on top of their things. 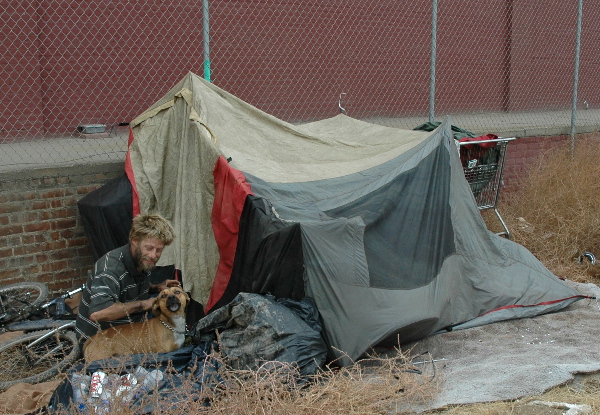 Steve and Charles have moved and set up a new shelter. A worker from the City of Fresno came by last Friday and told them they would have to move again. If they did not move, she threatened, the railroad people would come and arrest them.
§New Sign Put Up By the Railroad
by Mike Rhodes 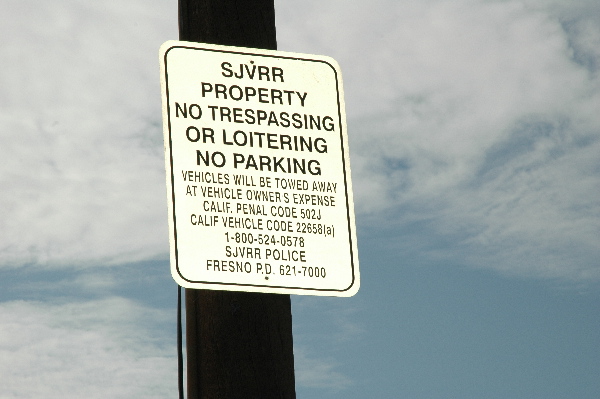 Why has the railroad chosen now to start harassing the homeless? All photos by Mike Rhodes

Add Your Comments
Comments (Hide Comments)
§Restraining Order
by Dan
The City could care less about the restraining order. They believe that public opinion is behind what they are doing. And, ask this question--who will enforce the restraining order in the first place? No U.S. Marshal will--it's a civil matter. Contempt of court? That's a fine--maybe. That TRO has no teeth in it at all-it is symbolic.
Add a Comment
§Follow-up
by Dan
Here is a statement that was posted by Fresno City Council president Jerry Duncan on his website in late October:

There has been some media lately regarding the perception of some that the City is "attacking" homeless people. Since there is no balance in reporting the facts involved by our local media some clarifications are in order.

First, the City is not attacking homeless people. What we are doing is moving and cleaning up the filth left by street people who are trespassing and have been imposing themselves on neighborhoods in downtown Fresno. The filth is overwhelming. I have personally visited these areas and the stench of human waste and garbage makes it very difficult to even breath. These "homeless camps" are also ramped with drugs, alcohol abuse and prostitution. In addition, these "camps" have been located across the street from people’s homes.

Why are these folks called "street people"? They are street people because what they do, they do by choice. Fresno has quality services for those who for whatever reason are truly homeless due to factors beyond their control. The Poverello House and the Rescue Mission are very successful in providing help and services to those who seek it. Those who have been on the news lately and have been defended by the ACLU are not seeking the help that is available and are making a choice to live on the streets of Fresno. Why aren't they seeking help? In a recent interview aired on a local news station one of the street people stated they won't go to the Poverello House or the Rescue Mission because they have rules; no drug use, no alcohol and no prostitution.

If these people want help, it is available. They choose not to get it.

These street people are also now being exploited by those with a political agenda who could frankly care less about what happens to them.

The unfortunate consequence of this exploitation and the poor local media coverage of this is that there is a very real risk that the general public will think the truly homeless; good people having some misfortune but working hard to overcome their situation, are the same folks.

Mr. Duncan is portraying these 'street people' as both victimizers and victims--victims of 'evil liberals' using them for their own ends.

It is apparent the City plans not to stop removing homeless camps. The TRO does not bar the City from doing that, so they will continue to do so.