by danielsan and ariel
One week after Brad Will´s death and five days after the military occupation of Oaxaca, the climate has worsened for foreigners, journalists, and indymedia correspondents. Today a local radio journalist was attacked in Santa Lucia, on his way to the site of Brad Will´s murder. Photos and an mp3 audio interview (3 min. 17 sec., in Spanish) follow. 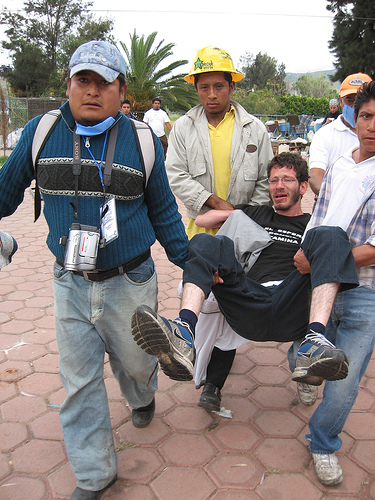 The climate for journalists has worsened in the days since the Federal Police occupied Oaxaca City. Today we talked to Juan Carlos Gomez, who until recently worked with a local radio station. He says he had recieved repeated threats on his life, and today was beaten by several men whom he believes are the same men who were shooting at Barricade 3 last friday, and that they were some of the same men who shot and killed Brad Will. In the interview below he describes the attack, saying 'They hit me in the stomach and the mouth... I fell back on the ground and felt a kick to my neck. I ran to the Cinco Señores [an intersection near the University] where I passed out. Some people picked me up and took me to the clinic [behind the barricades protecting Radio Universidad].'

In yesterday´s La Jornada, an article described a local (Oaxacan) journalist being detained and tortured. According to Reporters Without Borders, 'Gilardo Mota of the local weekly Opinión told Agence France-Presse on 1 November that he was held for 48 hours and was roughed by federal police after being arrested on 30 October while photographing police in action.'
A local fotographer, Alberto López Cruz from the daily 'Extra,' was grabbed and hit, and had his camera taken, which was given back after 'Extra' contacted the newly arrived 'authorities.'

With the PFP in town, local PRIistas are threatening members of APPO, teachers, and visible members of the Oaxacan resistance, including members of the organization CIPO-RFM (Consejo Indigena Popular de Oaxaca - Ricardo Flores Magón), as well as foreigners in general and foreign journalists especially. Indymedia has an especially high profile due to Brad´s affiliation with NYC indymedia. We´ve heard rumors that indymedia is on the minds and lips of PRIistas and government loyalists high up the chain of command, who have claimed that indymedia correspondents take orders from APPO, and that foreigners are stirring up trouble and encouraging the continuing resistance. At a recent march *in support of the PFP and Ulises Ruiz* a PRIista speaking to the crowd mentioned that there are 'good tourists' (who spend lots of money here in Oaxaca) and then there are 'bad tourists.' He said this directly into the camera of a foreign journalist, who took it as a threat.

In general, those who welcome the intervention of the Federal Police, fly white flags to demonstrate their loyalty to the government-in-exile, and support the ruling PRI party, are increasing their visibility. They are photographing foreigners at marches, especially those with cameras. We´ve been photographed on the street and by passing men on motorcycles. We heard that there were even attacks on teachers at the local cemetary on Dia de los Muertos. Reporters Without Borders classified Mexico as the worst Latin American country for journalists, passing Colombia; the report was released before Brad Will´s murder one week ago. The link is below, along with two other related stories. The local IMC space is full of journalists and supporters, and locals thank us every day for taking and posting pictures, are eager to give interviews and statements, and for continuing to stay in Oaxaca despite Brad´s death. 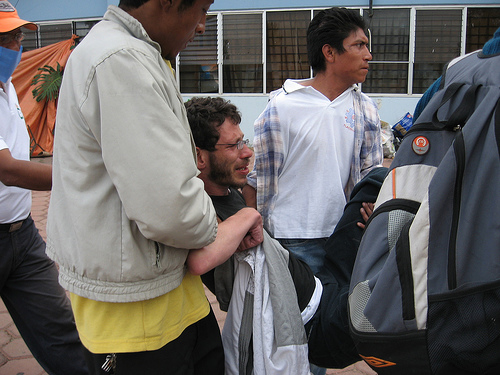 §Interview with Juan Carlos
by danielsan and ariel
Listen now:
Copy the code below to embed this audio into a web page:
Download Audio (3.0MB) | Embed Audio
Add Your Comments
Latest Comments
Listed below are the latest comments about this post.
These comments are submitted anonymously by website visitors.
TITLE
AUTHOR
DATE
Restrictions Severe
Steven Argue
Entry visas for foreign journalists
Jorge
Support Independent Media
We are 100% volunteer and depend on your participation to sustain our efforts!