Add an Event
Newswire
Calendar
Features
Home
Donate
From the Open-Publishing Calendar
From the Open-Publishing Newswire
Indybay Feature
Publish to Newswire
Add an Event
Related Categories: Peninsula | Government & Elections
Crashing the Party
by Carol Brouillet
Friday Nov 3rd, 2006 9:54 AM
Congressional Candidate Carol Brouillet describes the challenges she and other 9-11 Truth, Impeachment, Peace candidates experience trying to get their message out to the public. 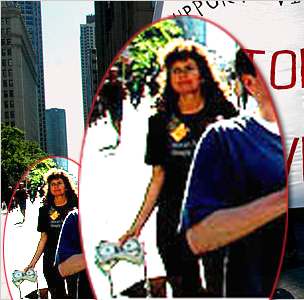 For all their quibbling, the Democrats and Republicans have much in common- their support of the “War on Terrorism,” “the PATRIOT Act, “Homeland Security,” American military/corporate dominance of the planet. Both parties have gone along with the Bush policies that have severely attacked our Constitution, shredded the Bill of Rights, instigated wars, institutionalized torture, suspended habeas corpus, granted Bush royal powers to label, detain, kill anyone he deems a threat, and even use the US military against the American people.

While polls show a growing number of Americans aren’t buying the lies, favor ending the wars, and favor impeachment, the media isn’t revealing that there is any genuine opposition party to the unending “War on Terrorism.”

However a Copernican revolution in consciousness, has been growing for a long time now, and was catalyzed by that pivotal day in American history- September 11th, 2001. That searing, defining moment is being “redefined” by the diverse, growing 9/11 Truth Movement, including candidates who are championing impeachment, a genuine investigation of 9/11, and peace. The pro-war, pro-corporate press has more or less ignored or attacked them, but they are crashing the parties, and communicating directly to the public via creative, emerging technologies, and directly- in the streets.

I consider myself to be just one example of the revolutionary consciousness that believes in truth, respectful dialogue, as opposed to deception, violent force, the collapsing paradigm of the current incumbents clinging to illegitimate power.

Born into a Republican family, grand-daughter of a Hollywood film producer, recipient of a trust fund, and inherited wealth, I was able to get the most liberal of liberal arts educations, including sailing around the world between colleges. My real education didn’t begin until I saw a film which disturbed me, and prompted me to do research on the CIA. Since 1992, I have juggled mothering three boys, a happy marriage, with activism, devoting much of my time to organizing for peace, justice, a better future, for my children and all children.

In the wake of 9/11, I went to DC with others to protest an impending war on Afghanistan, the PATRIOT Act, and to deliver flowers and thank-yous to Congresswoman Barbara Lee, for standing up to the Administration and not giving them a green light to pursue war. Back home in Palo Alto, I began a weekly Listening Project, to exercise and protect my First Amendment Rights and to inspire others to do the same. In January 2002, I organized marches on our legislators to demand a Congressional Investigation of 9/11.

Witnessing the lies, the destruction of evidence, the cover-up surrounding 9-11, and how the event was used to gain support for wars, and the horrific changes in domestic policy, I tried to educate the public, oppose the policies, and break through the mainstream press barrier the basic facts about 9/11. In October 2006, together with a young Canadian artist/activist named Blaine Machan, we began publishing Deception Dollars, artwork that resembled dollar bills, featuring George Bush, and many websites which challenged the official narrative of 9-11. The Dollars were incredibly popular, we published and distributed over 6,000,000 of them, and used the donations to premiere and produce films, events, conferences, rallies, marches, television and radio shows, books, magazines, DVDs, music, art, in short, a 9-11 truth movement which traversed geographical boundaries. I was the main organizer for the San Francisco International Inquiry into 9/11 in March 2004, and helped with the Toronto International Citizen’s Inquiry into 9-11, which followed in May 2004.

While it was easy for the media to ignore me, a mother with children, it has been harder for them to ignore the scientists and academics who have come out publicly to challenge the official narrative. Two scientists have lost their jobs, but not their voices, nor their commitment to truth, and humanity. In Denver last weekend, I was honored to emcee an event entitled: Research on 9/11: Why the Official Story Cannot Be True featuring renowned physicist Dr. Steven E. Jones, Kevin Ryan, chemist and whistleblower, and Kevin Barrett, PhD, teacher at the University of Wisconsin.

It was Kevin Barrett who used the revolution in consciousness phrase in his opening presentation, as he illuminated the history of false flag, or state sponsored terrorist attacks. He suggested that the real revolution is between those who would deceive, manipulate and trick other people, treating them as “objects” to be used, and the vast majority who value truth and believe in treating other people, and the Earth with respect.

Both Steven Jones and Kevin Ryan presented compelling scientific evidence that the NIST Report was deeply flawed and used “Bush Science,” shaping facts to fit a predetermined agenda, as opposed to real science which includes gathering facts, creating a hypothesis, conducting experiments, coming to conclusions based upon genuine evidence. The scientific evidence strongly suggests that the towers and building #7 were brought down using thermite (an incendiary) and explosives, something beyond the capacity of the alleged 19 highjackers armed with box cutters. I was even more impressed by the presenters sincerity, their courage, their genuine love and concern for the future of our country and humanity.

In Denver many years ago, I organized a panel on local currencies at The Other Economic Summit, and protested against the G-8 Summit. I remember feeling sorry for the heads of state, surrounded by police and security forces as they traveled to and from the airport, living in fear, because their policies created so much suffering, that they couldn’t walk like “normal people,” safely, down any street.

Jimmy Hendricks said, “When the Power of Love overcomes the Love of Power then the world will know peace.”

To me, 9/11 was an act of fear, by those who were afraid of losing power and thought that they could cling to it, by terrifying the world into submission and silence by a brazen act, expanding their police state apparatus to protect them from an increasingly outraged public, a growing global justice movement. They couldn’t have gotten away with it, without a subservient press that failed to raise the key questions, or pursue the truth, or expose the inconsistencies of the official story. However, Cheney, like Napoleon, believes that truth doesn’t have to be completely suppressed, just delayed until it no longer matters.

Aung Sung Suu Kyi says, “It is not power that corrupts, but fear- fear of losing power and fear of the scourge of those who wield it.”

To overcome the paralyzing paradigm of fear, Americans must find courage, hope, and a vision for a better world.

When I started facing and working on the world’s problems, what astonished me was that solutions received even less publicity than the problems, themselves. It’s actually more fun to work on solutions, but at the moment, the biggest obstacle is the criminal cabal that has high jacked our country, seeking global domination. I have so much confidence in people and their inherent ability to govern themselves, as long as they are not preyed upon, by those in the business of war, or coveting their resources. Simply redirecting the resources of humanity from killing and controlling towards meeting basic human needs would greatly improve human relationships on every scale.

I have no burning desire for power, and did all that I could to encourage my congresswoman to champion truth, impeachment, peace, but instead she has supported the cover-up, worked to expand the national security state, and perpetuate the bogus “War on Terrorism.” When a member of my local Green Party Council suggested that I run for Congress, I agreed to, just to be able to raise the dialogue on key issues such as 9-11 truth and impeachment. These issues, however, like the stolen elections, are taboo and my candidacy has had little press beyond the confines of the internet. If I’m on television as a 9-11 truth activist, there is no mention that I am running for congress. If I am mentioned as a candidate, there is no mention that I am working for impeachment or a genuine investigation of 9-11. Our electoral process favors wealthy or corporate sponsored candidates or those who can manipulate the machines that count the votes.

I shouldn’t blame the media, however. I don’t like asking for money, and the media doesn’t take anyone seriously unless they spend lots of money on their campaign. I have spent more time championing 9/11 Truth and Impeachment, than selling myself as a candidate.

Still, aside from a three word ballot description, and a one word party designation, I believe the press should, at least, give some background on the issues and background of those seeking to represent their Congressional District in Washington DC. Or is the media afraid that candidates like me are such a threat to Democrats and Republicans that they might crash the Party system which favors endless wars, corporate crooks, and liars in the highest offices in the land.

Carol Brouillet is on the Green Party ticket in California’s 14th Congressional District. 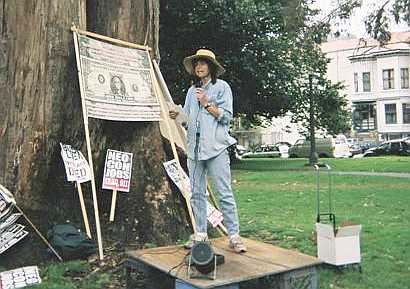 Speaking at the Impeach the Terrorists! rally in San Francisco in September
§Catching People's Attention
by Carol Brouillet Friday Nov 3rd, 2006 9:54 AM 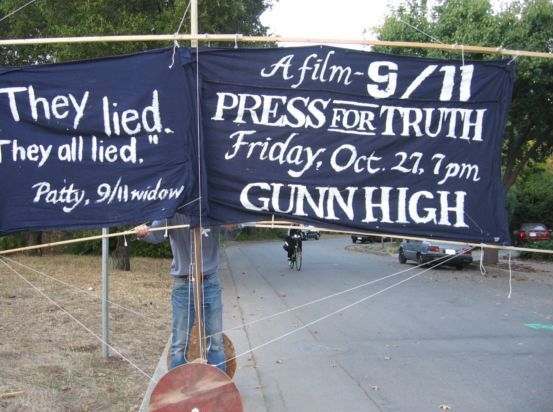 Carol and another activist made this banner to draw people to a local 9-11 truth event which she organized. The Stanford Daily did a cover story on the event. Details at http://www.communitycurrency.org/oct27.html
Add Your Comments
LATEST COMMENTS ABOUT THIS ARTICLE
Listed below are the latest comments about this post.
These comments are submitted anonymously by website visitors.