Add an Event
Newswire
Calendar
Features
Home
Donate
From the Open-Publishing Calendar
From the Open-Publishing Newswire
Indybay Feature
Publish to Newswire
Add an Event
Related Categories: Americas | International | Santa Cruz Indymedia | Global Justice & Anti-Capitalism | Media Activism & Independent Media
Tensions Rise: University Autonomy Violated as Radio is under seige
by danielsan
Thursday Nov 2nd, 2006 5:38 PM
The Federal Government is trying to consolidate it´s power in Oaxaca, attacking the University Campus (a violation of its guaranteed autonomy) in order to remove its radio station from the air (at 1470 AM), which broadcasts the words of teachers, students, workers, the indigenous, and others the Mexican government wants silenced. 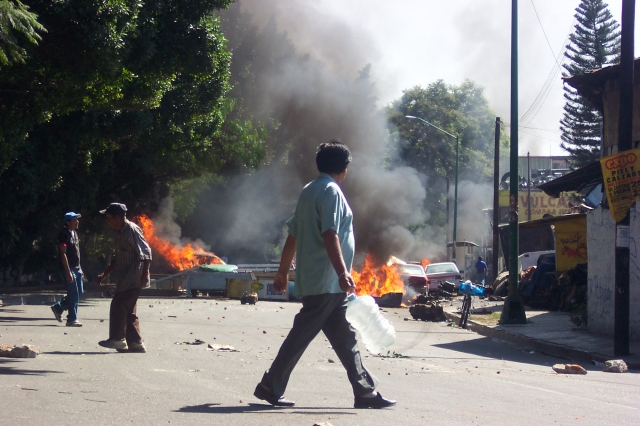 After a day of intense street fighting, in which the Federal troops entered the campus of UABJO, Radio Universidad is still on the air. Oaxaca City is full of tension as Canal 9 has already been attacked and reoccupied, a foreign journalist has been killed, the striking teachers have been evicted from the Zòcalo, people are being rounded up, and street by street people are risisting the incursions and the very presence of the military. Foreign journalists are being threatened, and teachers are being attacked.

The backlash is beginning, as the arrival of the military all but guarantees impunity for Mexicans loyal to the ruling PRI.
http://radio.indymedia.org:8000/appo.mp3.m3u
§interseccion
by danielsan Thursday Nov 2nd, 2006 5:38 PM 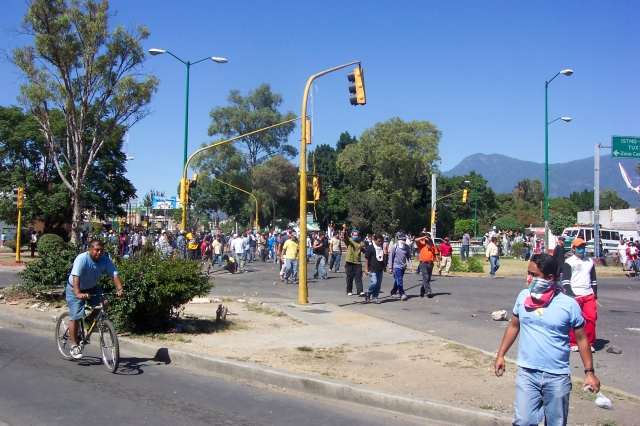 original image (2160x1440)
This street connects the city center to the University Campus compound. Street protesters and riot police clashed all day for control of the streets around the campus. Low flying military helicopters dropped tear gas canisters, protesters comandeered vehicles in order to fortify barricades made of junked cars from a recking yard. The crowd was full of men and women, young and old, resisting the push of the PFP and listening to the radio to hear calls for support and news from inside the studios of Radio Universidad, Radio APPO.
§2 helis
by danielsan Thursday Nov 2nd, 2006 5:38 PM 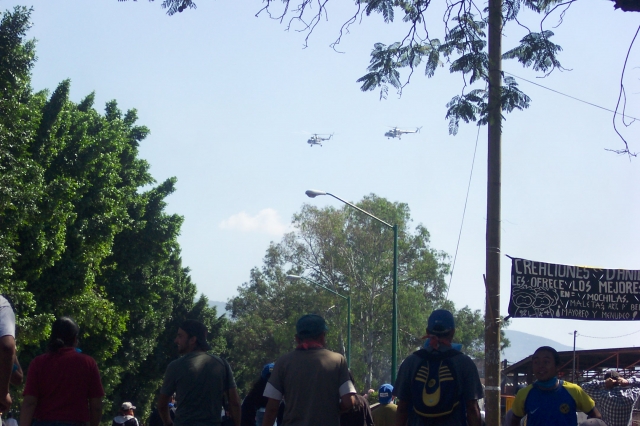 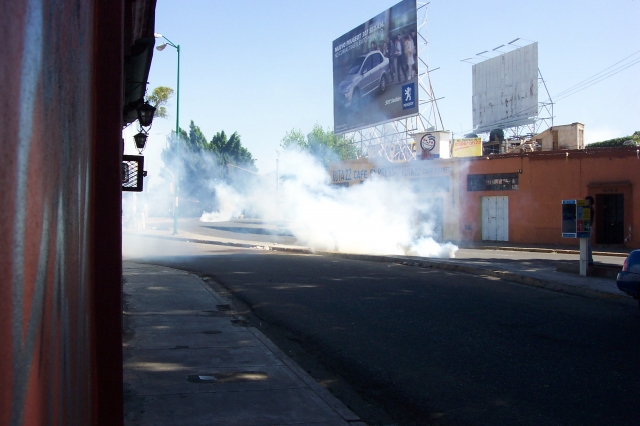 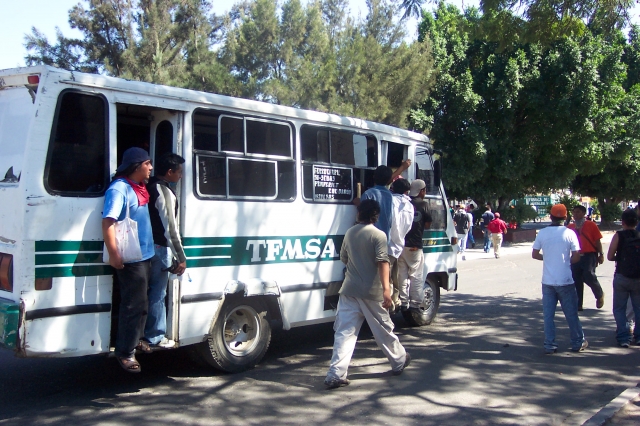 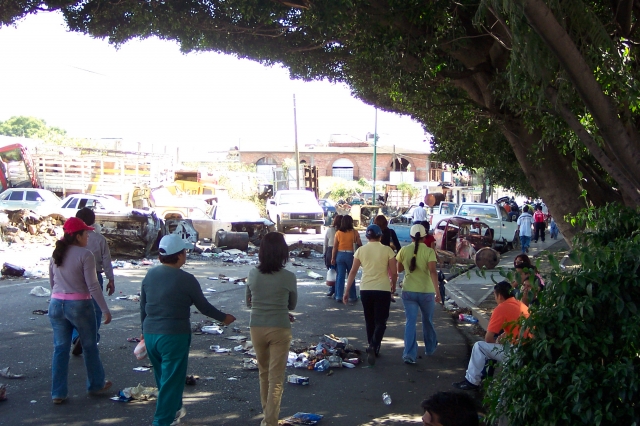 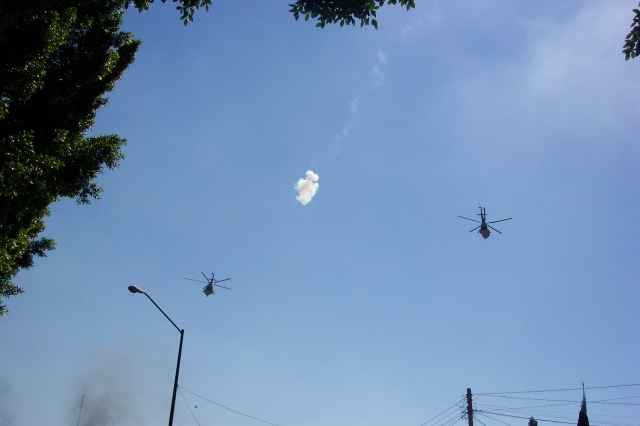 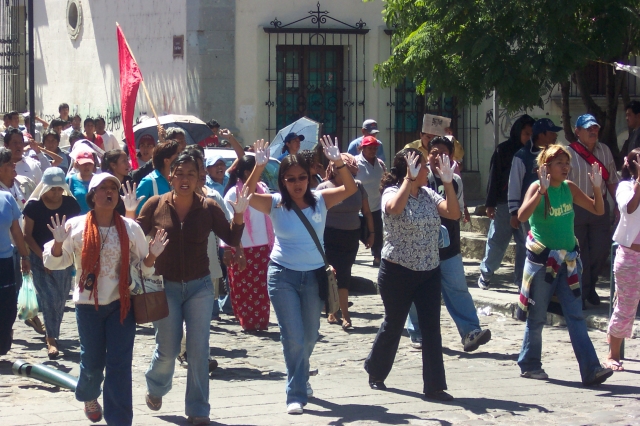 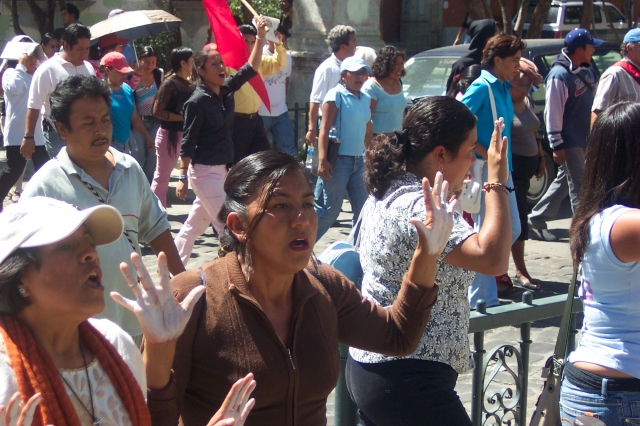 original image (2160x1440)
A group marched around the city center ALL DAY today, from police line to police line, chanting until voices started to go hoarse, and then even still as I write they continue. The two fotos above are from the morning: the one following from the early evening.
§march later
by danielsan Thursday Nov 2nd, 2006 5:38 PM 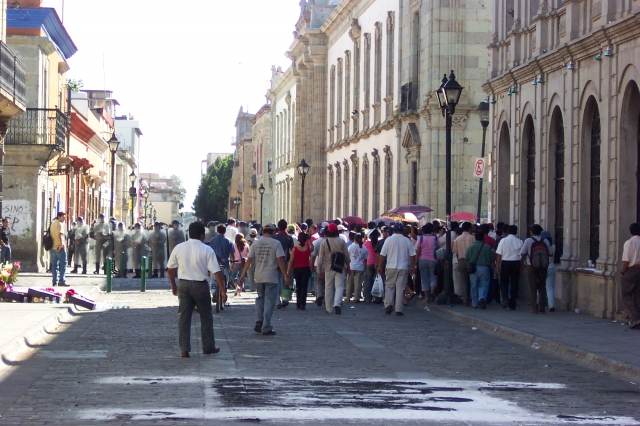 original image (2160x1440)
§no soy maestra
by danielsan Thursday Nov 2nd, 2006 5:38 PM
Listen now:
Copy the code below to embed this audio into a web page:
Download Audio (2.2MB) | Embed Audio
This is a statement from Monday--2 min. 23 sec., Spanish--a woman asked me to spread the word in my home country: She is NOT a teacher, she is NOT a member of APPO, she works downtown, and she is outraged at the crimes of Ulises Ruiz and the behavior of the government and military in her city. She says that this is not just APPO or just the teachers, but it is the pueblo, the people of Oaxaca who are resisting the corrupt government.
Add Your Comments
Support Independent Media
We are 100% volunteer and depend on your participation to sustain our efforts!