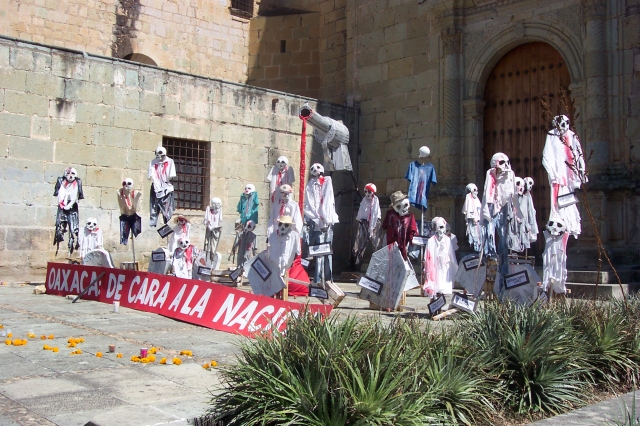 original image (2160x1440)
Fotos from the past few days, including one of many of the memorials and altars dedicated to Brad Will, killed by Oaxacan police on Friday as he
was filming attacks on the Barricade 3 in Colonia Santa Lucia, now renamed Baricada Brad Will. 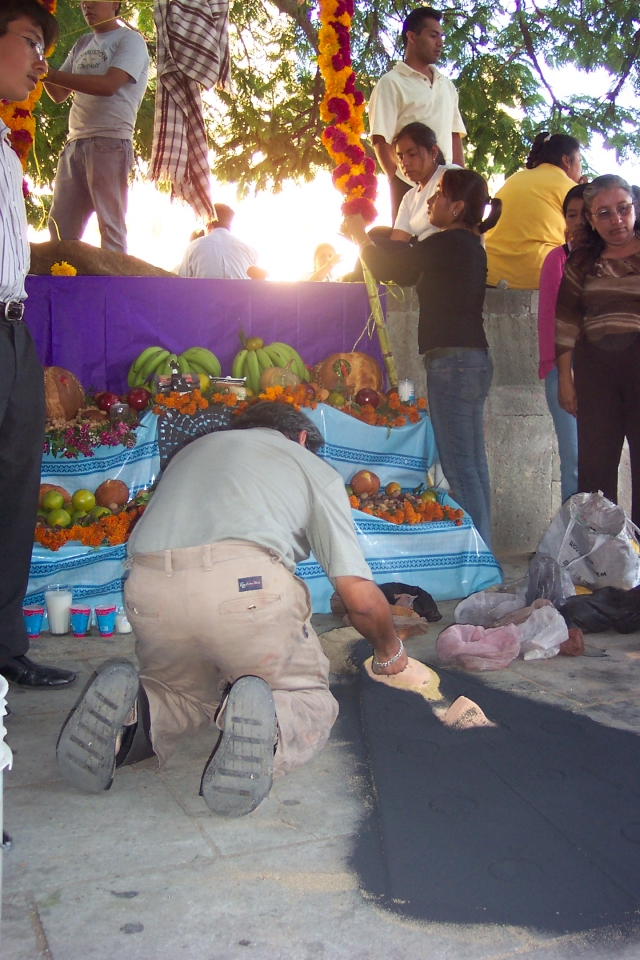 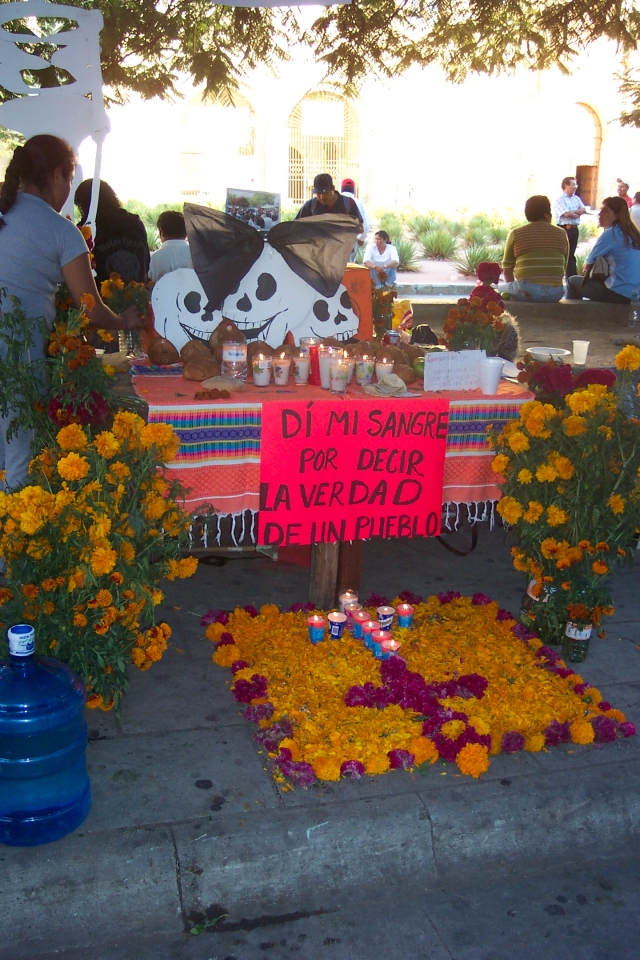 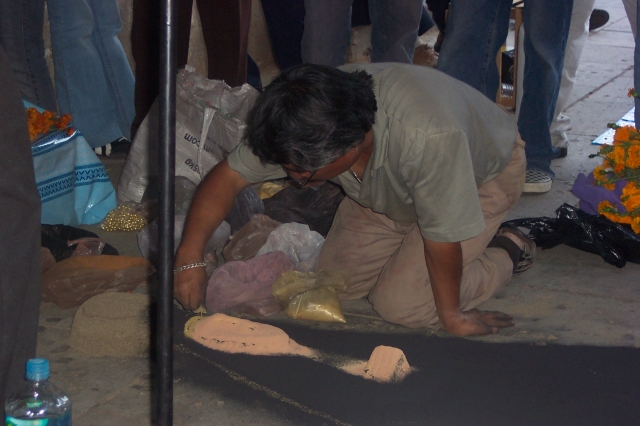 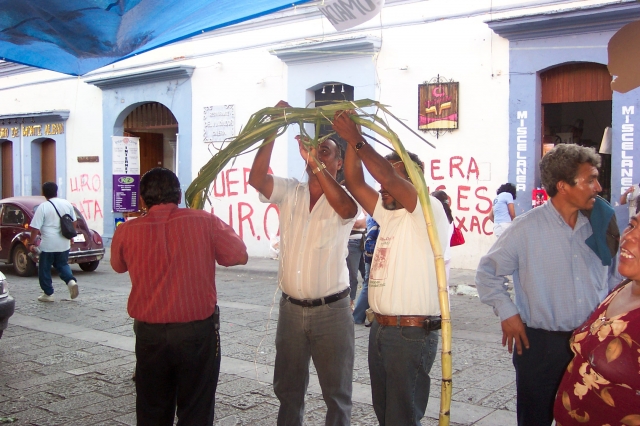 original image (2160x1440)
This altar went up in the Plaza de Santo Domingo, where most of the teachers are now setting up their encampment after being evicted from the
Zócalo again on Sunday. 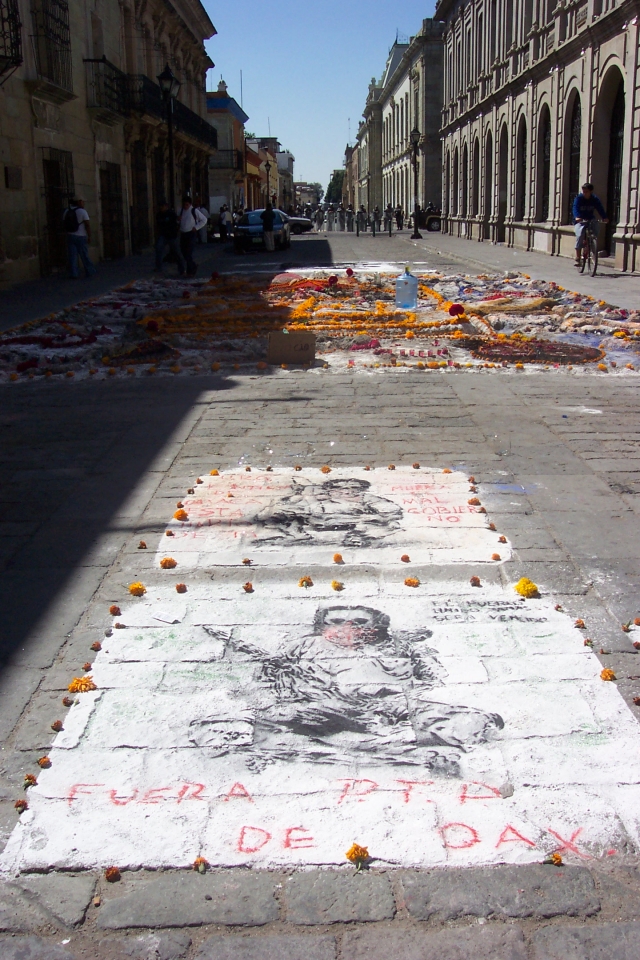 original image (1440x2160)
This instalation is in sand and charcoal 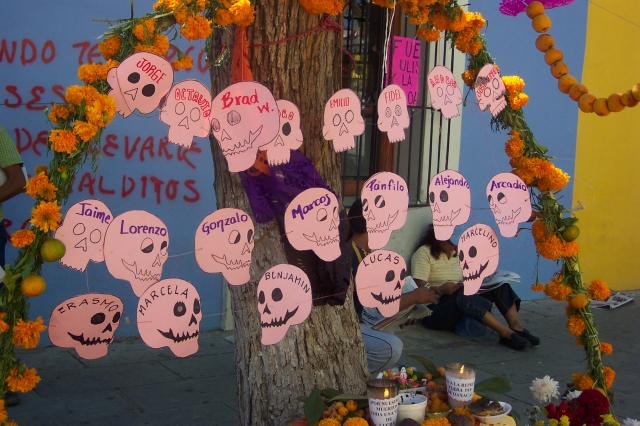 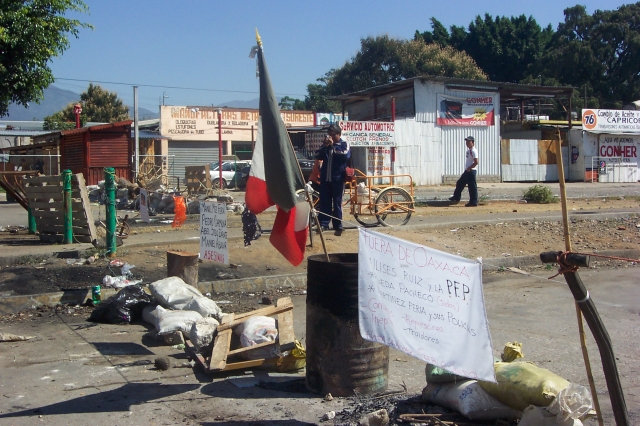 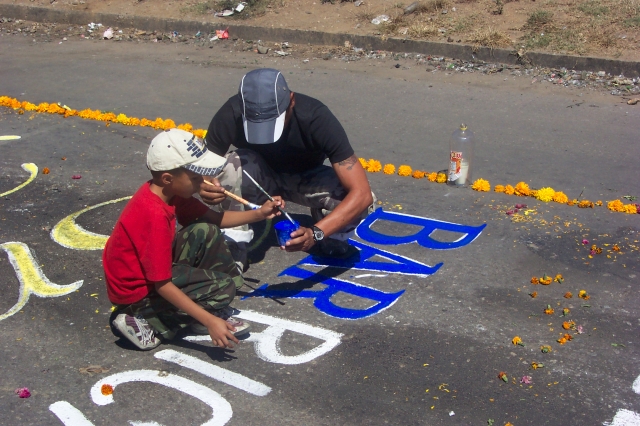 original image (2160x1440)
Barricade 3 is located in a somewhat PRIista neighborhood and had been attacked before it came under fire on Friday. On Wednesday morning a crowd of people gathered to honor Brad at the altar that had been set up for him the night before.
§letter
by danielsan Thursday Nov 2nd, 2006 5:16 PM 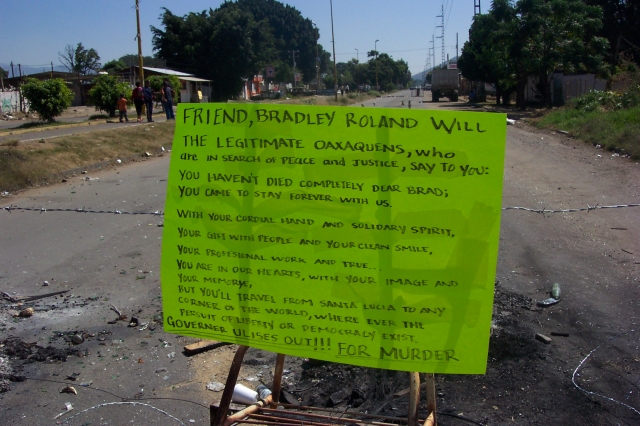 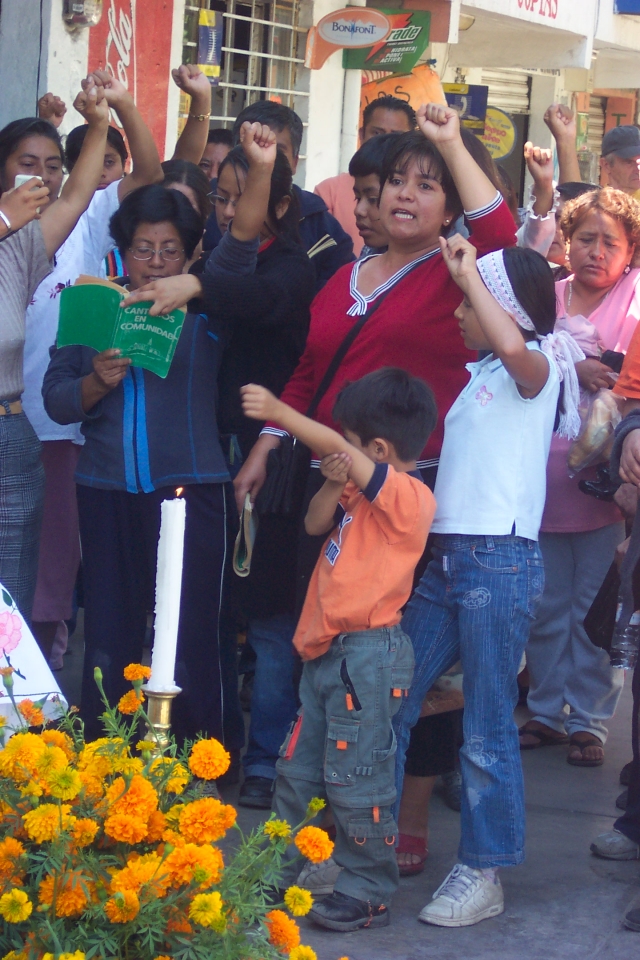 original image (1440x2160)
§juan andres audio
by danielsan Thursday Nov 2nd, 2006 5:16 PM
Listen now:
Copy the code below to embed this audio into a web page:
Download Audio (5.3MB) | Embed Audio
A rosary was given, several people spoke, people added to the altar and shared chocolate and pan de muerto (bread). The teacher pictured above,
Juan Andres, was also shot on Friday, injured in the shoulder. His statement is above in MP3 format, in Spanish. 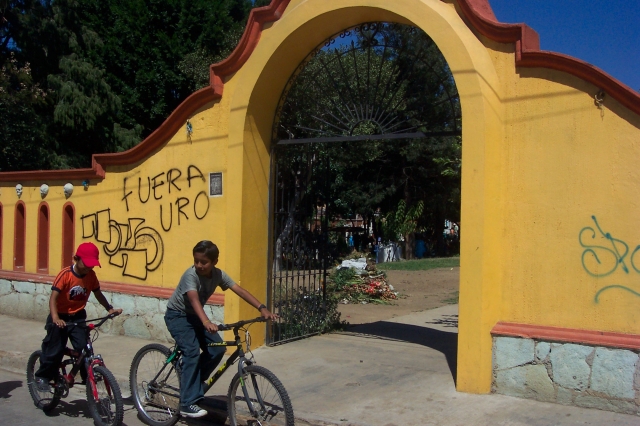 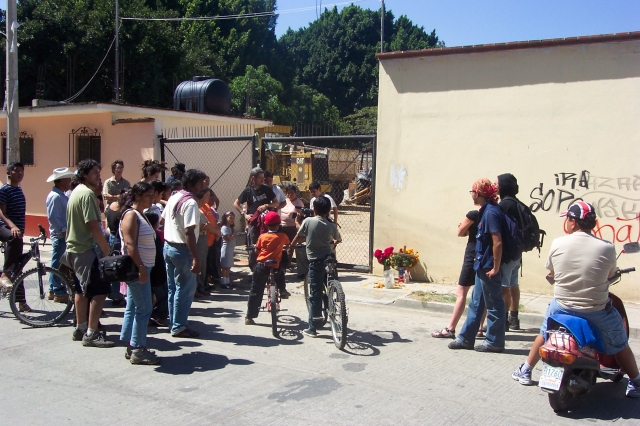 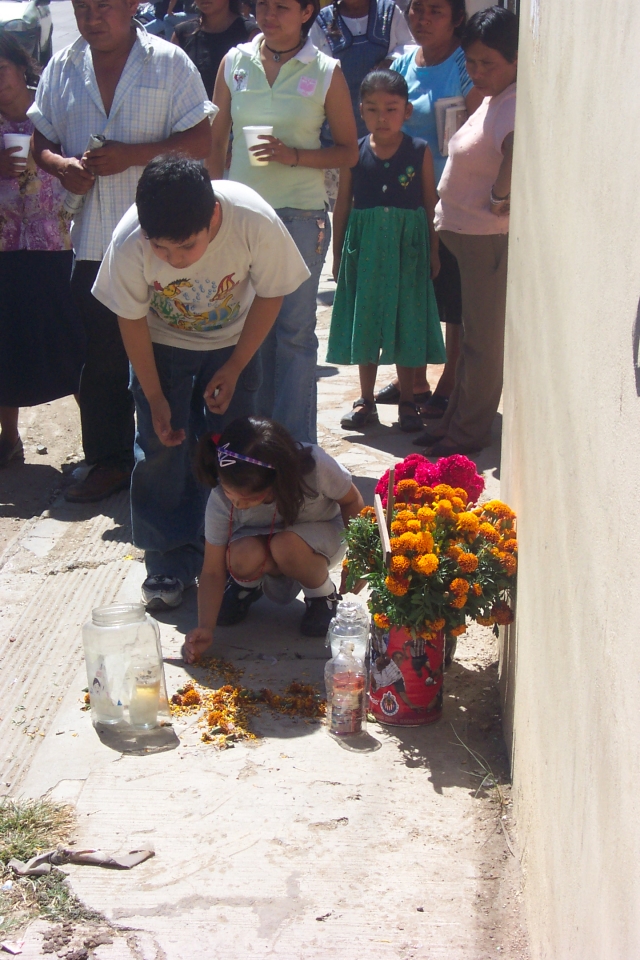 original image (1440x2160)
We walked down a few blocks, past the cemetary where people were gathering around the graves of loved ones, to the spot where Brad was shot. A small altar was already set up, but we added to it and gathered around, but had to leave together after a police car arrived and faced the crowd. I was inspired by the bravery of a group of people who lined up between the car and the crowd, all the way across the street, aiming video cameras at the car, standing in the line of fire, until the crowd decided to walk back to the barricade.
§llagada de policia
by danielsan Thursday Nov 2nd, 2006 5:16 PM 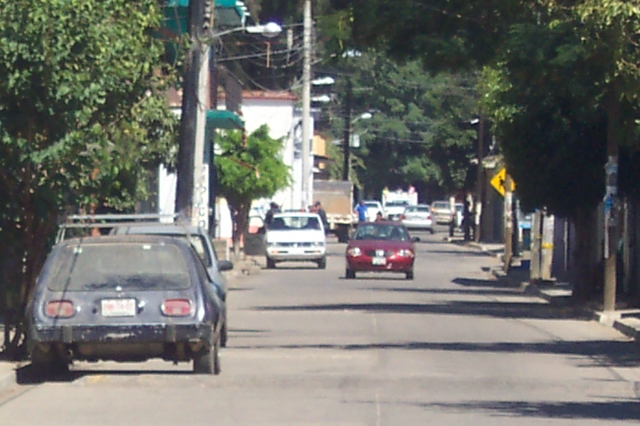 original image (2160x1440)
§Video of the Memorial for Brad Will
by danielsan Thursday Nov 2nd, 2006 5:30 PM
Copy the code below to embed this movie into a web page:
Download Video (10.9MB) | Embed Video
One minute video from the Dia de los Muertos Altar ceremony for Brad Will, at Barricade 3 in Santa Lucia
Add Your Comments
Support Independent Media
We are 100% volunteer and depend on your participation to sustain our efforts!