Add an Event
Newswire
Calendar
Features
Home
Donate
From the Open-Publishing Calendar
From the Open-Publishing Newswire
Indybay Feature
Publish to Newswire
Add an Event
Related Categories: U.S. | Global Justice & Anti-Capitalism
Chicago: Arrests Fail to Deter Protest-Vigil for Oaxaca at Mexican Consulate
by CIMC - DR
Wednesday Nov 1st, 2006 8:18 AM
Seventy-five people gathered in front of the Mexican Consulate in Chicago Monday for a solidarity protest to oppose the state repression and violence being carried out against the people of 0axaca, followed by a memorial vigil for murdered New York City IMC journalist Brad Will. - Photos from the Chicago IMC newswire. 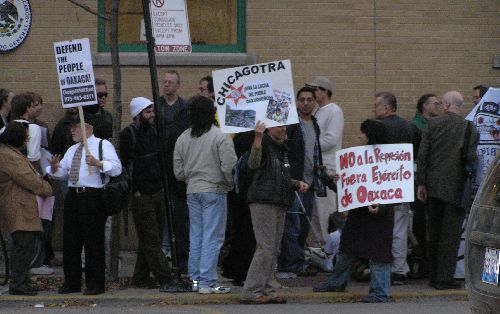 The actions were collaboratively organized by Chicago Otra, Chicago Indymedia, and Brad's many grieving friends in the Chicago area.

Chicago cops arrested two people at the onset of the 3:00 PM action. Chicago IMC journalist Christine Geovanis was arrested after attempting to tape a photo of assassinated NYC-IMC journalist Brad Will to the exterior front wall of the consulate. A second activist was arrested after objecting to her arrest. Both were charged with disorderly conduct and spent 11 hours in lock-up.

Protesters refused to back off after the arrests, and Chicago Otra took delegation and a videographer into the consulate to demand an end to state repression against the people of Oaxaca and APPO, and justice for all those murdered by police and PRI paramilitary thugs - including Will . Not surprisingly, consular officials remained noncommittal. Chicago Otra immediately announced a series of actions and events in the coming days to raise local public awareness about paramilitary and government-sponsored violence in Oaxaca, and promote concrete solidarity with the larger struggle in that impoverished Mexican state for real economic and social justice.

Protesters later clustered around a Dia de los Muertos Ofrenda for Brad on the sidewalk outside the Consulate as his friends shared memories, tears, defiance, poetry and humor - something all agreed Brad would have appreciated - and asserted "Brad Will, Presente!

"Bradley Roland Will, American, born in Evanston IL, raised in Kenilworth IL, class of 1988 New Trier High School. Thank you, from the bottom of my heart, for organizing this vigil and celebration." - Christy Will 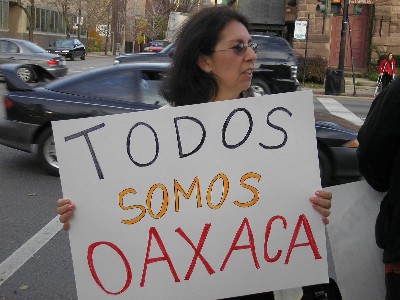 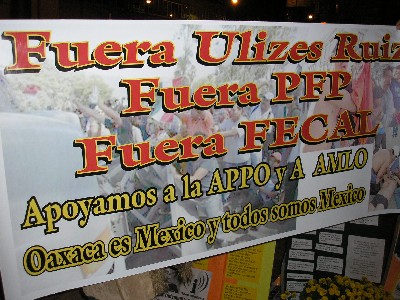 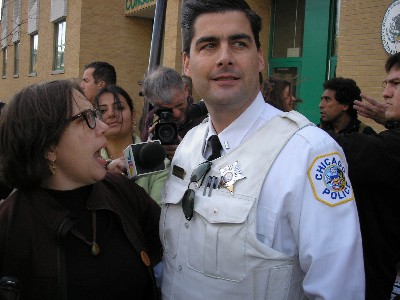 Chicago IMC journalist Christine Geovanis arrested after taping a image of murdered NYC-IMC journalist Brad Will to the Consulate wall.
§Ofrenda for Brad and the APPO martyrs
by CIMC - DR Wednesday Nov 1st, 2006 8:18 AM 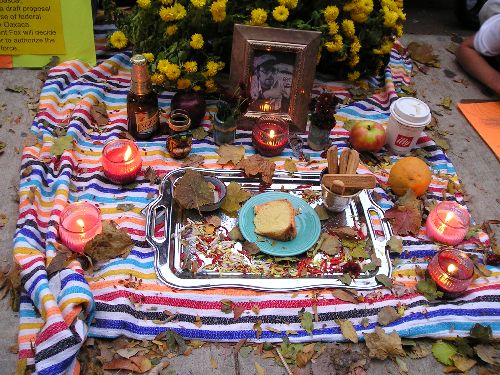 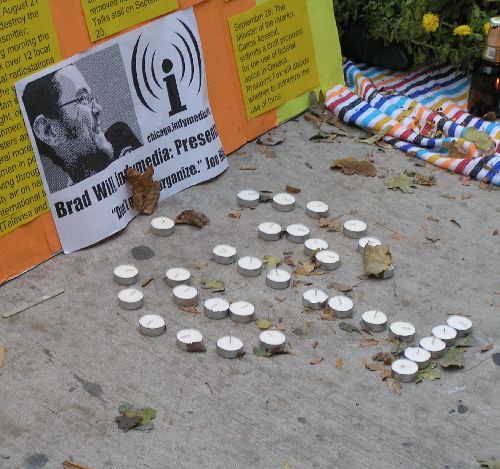 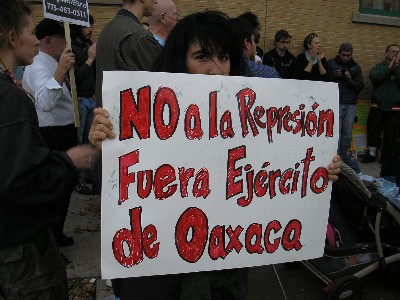 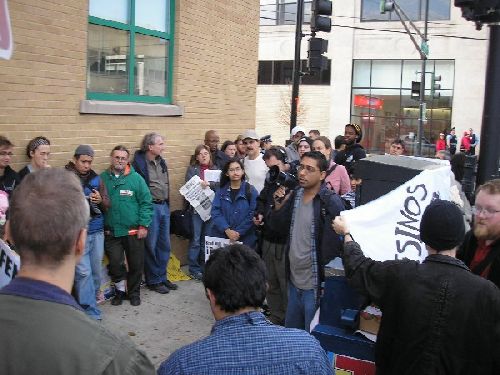