Add an Event
Newswire
Calendar
Features
Home
Donate
From the Open-Publishing Calendar
From the Open-Publishing Newswire
Indybay Feature
Publish to Newswire
Add an Event
Related Categories: East Bay | Fault Lines
Divide & Conquer
by Nico Rahim (nico [at] dionysusunemployed.net)
Friday Oct 27th, 2006 8:48 PM
It’s the all too familiar fracture in the American Left: the rich want parks and open space, the poor want decent jobs and housing, both all too often unwilling to compromise one for the other. Granted it’s not that black and white, but looking at the various community groups and organizations that have mobilized around the controversial Oak to Ninth project it seems that those archetypes fit. 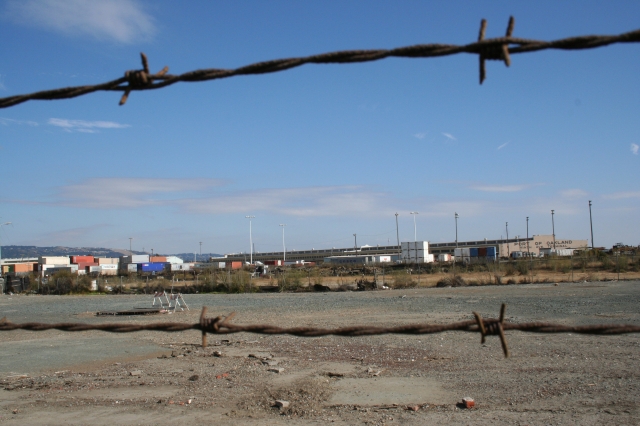 original image (3456x2304)
The main parties at play are the Oak to Ninth Community Benefits Coalition (CBC) and the Oak to Ninth Referendum Committee. In discussions with Fault Lines, both groups had belittling words for the other. Andy Nelsen of the Urban Strategies Council and an organizer for CBC said, “I think they [the Oak to Ninth Referendum Committee] are misguided, they are throwing everything at the wall just to see what sticks.” He later said, “Our members have no jobs or shitty jobs, public parks and open space will not change that.”

While Kate Tanaka of the Oakland Green Party said Mike Ghielmetti, of the developer Signature Properties, targeted the CBC as “weakest link,” and the easiest group with whom he could cut a deal.

The CBC—consisting of 2,000 residents of the Eastlake, Chinatown, and Lower San Antonio neighborhoods, and organizations such as East Bay Alliance for a Sustainable Economy, Urban Strategies Council, and the Asian Pacific Environmental Network—thought the fight for a better Oak to Ninth was over in late July when they reached an agreement with Signature Properties for a project that includes: 3,100 units of housing, with 465 units for low income families, along with 200,000 square feet of commercial space, and 30 acres of open space on the Oakland Estuary.

Nelsen told Fault Lines, “We are quite pleased at the deal we negotiated.” The CBC boasts that the 465 low income units are mainly multi-bedroom spaces to accommodate families who are not just moderately low income—up 120 percent of the area median—but are priced for families at 60 percent of the median, more than double what is mandated for redevelopment areas. The developer is obligated to cover the cost of career training in union apprentice programs—a 900-hour minimum—for 300 new workers.

In late July the Oakland City Council passed an ordinance, 6-0, approving the Oak to Ninth development, with two abstentions objecting to the lack of public schools in the immediate area and the other for lack of public space.

Upon city council approval, members of the Oakland Green Party, Sierra Club, the League of Women Voters, and other neighborhood organizations such as the Coalition of Advocates for Lake Merritt (CALM), formed the Oak to Ninth Referendum Committee, to bring the ordinance to the ballot.

They argue that under the proposal agreed to by the city council, Oakland will take the bill for the entirety of the on-site affordable housing, putting a strain on Oakland’s affordable housing budget. Furthermore, all property taxes to be collected from the proposed development will not go into the city’s general revenue account but will be allocated to the California Redevelopment Agency, with 25 percent of revenue from the project going back to low income housing in the Central City East Redevelopment Area. In light of these facts the Referendum Committee believes the Oak to Ninth project could easily be a financial burden to the city of Oakland, not a benefit.

Many on the referendum committee would like to see the city return to Estuary Policy Plan, which was passed by the city council in 1999 and would turn the waterfront area in question to 55 acres of accessible public space. Others fall back on the Port of Oakland’s original sales agreement with Signature Properties that would require them to provide 42 acres of parkland.

The Referendum Committee made headlines in the past month by collecting 25,068 signatures in 30 days to bring the Oak to Ninth project to the ballot, only to see Oakland City Attorney John Russo write an opinion invalidating the petition for failing to present the final version of the ordinance passed by the city council.

Erica Harrold, the spokesperson for the city attorney’s office told Fault Lines the Oak to Ninth Referendum Committee “is trying to save face with their lawsuit, they simply did not do their homework.” Harrold went on to say, “Under State Election Law a petition can be thrown out if there is even a missing comma, yet the copy of the ordinance used to petition by the referendum committee read ‘NOT ACCURATE – TO BE UPDATED’ on the Table of Contents.”

While there may be blatant errors in the Referendum Committee’s hasty attempt at bring the Oak to Ninth Ordinance to referendum, it is hard to undermine their reasons for attempting to do so. According to Harrold there is still an outside chance a judge could grant the committee another 30 days to gather the signatures needed for referendum by petitioning on the final ordinance.

Without a favorable court decision in one of the three pending law suits, the Oak to Ninth Development will go ahead as decided by the city council. While the debate on Oak to Ninth may be over, it is clear that as long as significant disputes remain between those who oppose high end residential development, Mayor Jerry Brown’s famous declaration, “If you are not for gentrification, you are for slumification,” will continue to be the philosophy behind Oakland’s development.

http://www.dionysusunemployed.net
Add Your Comments
Support Independent Media
We are 100% volunteer and depend on your participation to sustain our efforts!